Look back 13 years ago to a historic moment in UFC history, when Matt Serra upset UFC legend Georges St-Pierre
By Thomas Gerbasi, on Twitter: @TGerbasi • Apr. 7, 2020

It doesn’t seem like it was thirteen years ago, but it was, and on April 7, 2007, Matt Serra shocked the world when he knocked out Georges St-Pierre to win the UFC welterweight title. And yes, there have been big upsets since then, some by even bigger underdogs than Serra was, but to this observer, there was none bigger before or since than the one that took place at Toyota Center in Houston.

I talked to Serra before the fight, and “The Terror” knew the odds were against him, but he didn’t care. He was showing up to fight, and in a fistfight, he knew all bets were off. Here’s a look back at that pre-fight story, followed by a little post-script with a conversation we had years later.

Matt Serra doesn’t have a chance.  In fact, he shouldn’t have even got on a plane from New York to Houston.  He should have just stood home, turned down the opportunity to face Godzilla (Georges St-Pierre) this Saturday at UFC 69 and stuck to running his two Jiu-Jitsu schools and getting ready for his wedding next month. 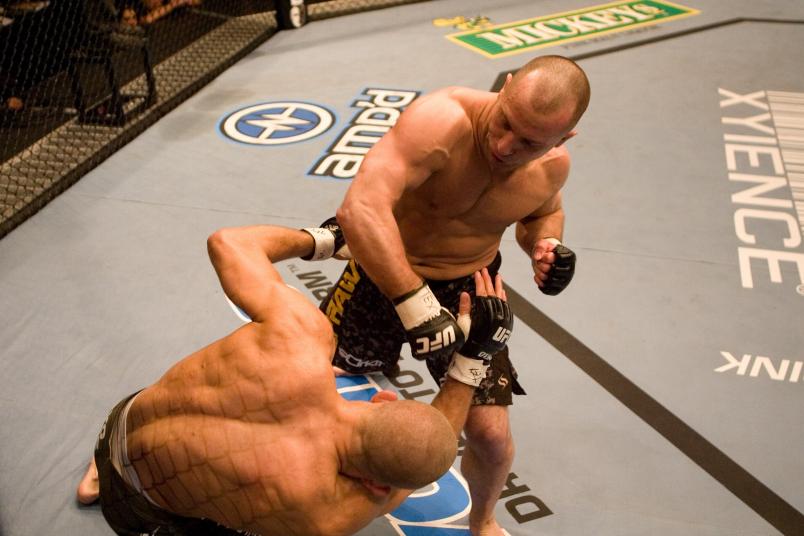 At least that’s the impression you get from the ‘guy on the street’ who saw St-Pierre trounce longtime champion Matt Hughes in less than two rounds for the UFC welterweight crown last November.  And it wasn’t just the Hughes fight, because GSP has been beating guys like BJ Penn, Sean Sherk, Karo Parisyan, Frank Trigg, and Jason Miller for a few years now.  Let’s face it, the classy Canadian is one of the best in the world.

But he’s not unbeatable.  In this game, more than in any other pro sport, the right gameplan, the right attitude, and the right breaks can lead an underdog to huge heights.  Quick, how many of you picked Randy Couture to shutout Tim Sylvia for the UFC heavyweight championship last month?

So when Serra enters the Octagon for the title shot he earned by winning season four of ‘The Ultimate Fighter’ reality show, he’ll have what he thinks is an airtight gameplan (though he obviously won’t reveal what it is), and the right breaks, if they go his way, will show up on fight night.  So right now, all we have to go on from the 32-year old is his attitude, and as a New Yorker, he’s got plenty of that…but in a good way.

“I’m going in there to fight,” said Serra.  “And all the hype and everything else boils down to two guys fighting in the cage.  I’m training hard and looking to execute what I’ve got to do.  I don’t care what people say, I’m in control of my own destiny in there.”

And the way he sees it, there’s no pressure on him this Saturday – it’s all on St-Pierre.

“Every round I’m in there with the guy is a round I shouldn’t be in there with him, people are thinking,” he explains.  “So that’s got to be going through the person’s head.  I hear what people are saying, and that’s fine.”

What people are saying is that St-Pierre’s first title defense should be a mere formality, that ‘the Jiu-Jitsu guy’, Serra, just doesn’t have the well-rounded tools to win against a hybrid fighter like the champion.  Serra, 15-4 in pro MMA, believes a lot of people are judging this fight based on each fighter’s most recent bout.  For St-Pierre, it was the trouncing of Hughes; for Serra, it was a close and less than exciting three round decision over Chris Lytle to win the TUF4 crown.

“Because I’m still labeled the jiu-jitsu guy, they feel that if I don’t get the guy down I’m in trouble, but they say that for pretty much all my fights,” said Serra. “And another reason (why I’m the underdog) is that Hughes couldn’t get him down, and he destroyed Matt Hughes.  If you look at the fights we’re coming off of, my fight with Chris, although it was technical, it wasn’t a barnburner, so to speak.  And he ran through the top guy in the division, Matt Hughes, who runs through people himself.” 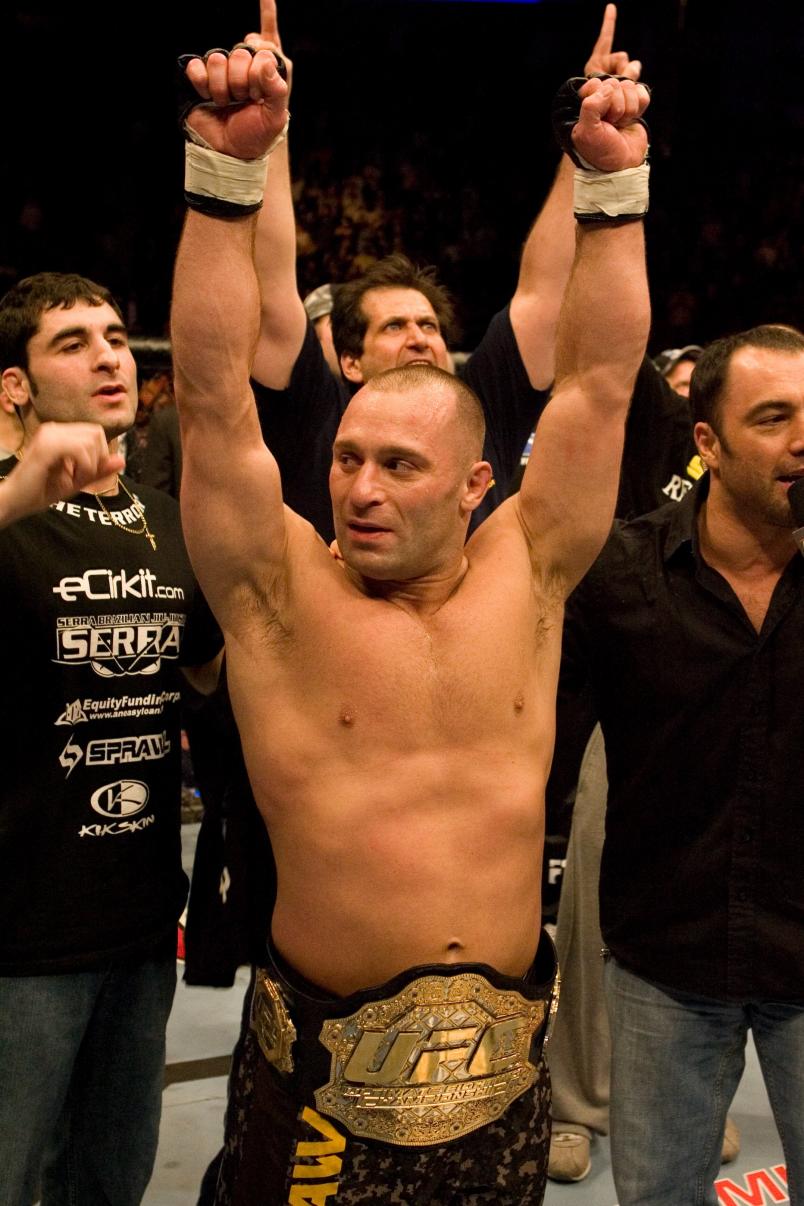 Look a little closer though, and Serra is more than just a Jiu-Jitsu player.  In fact, the first question I ever asked him, back before his UFC debut in 2001 against Shonie Carter, was what ‘would he say to people who said he was a one-dimensional fighter?’

“I’ll punch him right in the chin.”

Serra laughed back then, but he was serious when it came to being a complete mixed martial artist, and he still is.

“I feel I am dangerous everywhere, and if people are looking past that, that’s good for me, I’m not upset about it.”

Sure, if you give him the takedown and an opening for a submission, he’ll take it, but he doesn’t shy away from a good standup scrap, and even had Parisyan in deep trouble early in their 2005 fight before gassing and allowing ‘The Heat’ to take over.  And that fight, won by Parisyan via unanimous decision, showed another dimension of Serra’s game, as he displayed tons of heart despite the continued onslaught from his Armenian-born opponent.

“Even in that fight I showed that I could take a beating and stay in there,” said Serra.  “I’m not in the quick tap club.”

He’s also coming to win, despite the odds.  And oddly enough, you talk to Serra long enough and you get the impression that he’s a fan of his opponent, something you don’t see much of these days in combat sports.

“It’s a big challenge, and I’m looking forward to it,” said Serra.  “Anybody who’s a real fighter and who is in the UFC wants to fight the toughest guys.  I did that my whole career. If you look at the list of the guys I fought, it’s some of the best guys who ever graced the Octagon in my opinion.  I’m a fan of everybody I fought and I love watching those guys fight.  To fight Georges is just great for my career.  It’s just such a challenge, how can I not be excited for that?  I’m fighting the best guy in the world right now and I’m excited just to do that and I’m gonna take advantage of it and really give it my all.”

That’s a comforting fact, and one that Serra’s past history certainly verifies.  He’s never been blown out in a fight, he was arguably winning the one fight he was stopped in (against Shonie Carter), and he always comes to fight.  Whether that’s enough to topple St-Pierre from the throne remains to be seen, but that’s not Serra’s concern right now.  He’s showing up to fight, and what happens happens.  Call it the gift of experience.

“There were times in my career when I was coming off two losses, and that could add up to ‘man, if I lose this one, I’m not only out of the UFC, it’s another loss’ and that can really stress you out,” he admits.  “I just really always bring it back to, hey, I’m getting paid to fight, I enjoy fighting, I enjoy doing what I’m doing, so keep it simple.  Because once you start putting everything else up there – it’s your big shot, it’s this, it’s that – not only does that put pressure on you that can prevent you from performing the way you should, but it’s just not fun.  I have to stay in the moment and that’s what’s gonna save me in this fight.”

That, and a ton of heart.

“All I can really say is that I’m gonna be game for this fight,” he said.  “I’m not gonna go in there timid for my title shot.  Win hard or die hard; if I lose, it’s not gonna be retreating.  I’m going after him.” 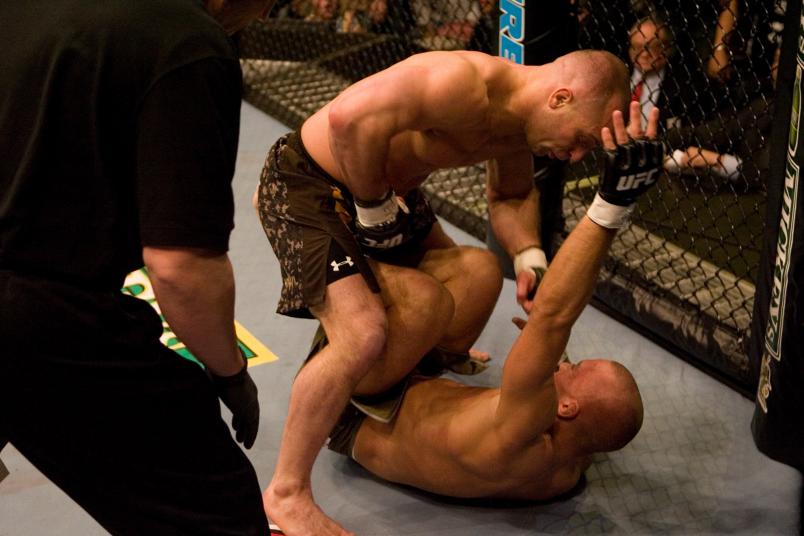 In 2018, Matt Serra was inducted into the UFC Hall of Fame. In talking with him about this accomplishment and his career, we had to come to UFC 69 and the first fight with GSP. As way of a reminder, I mentioned that he was a prohibitive underdog that night in Houston.

“When I saw him just destroying people – Sean Sherk, Frank Trigg, Matt Hughes, BJ Penn – guys with way better wrestling than me, I’m like, if I go in there with a straight up jiu-jitsu philosophy, this is going to be a long night because I’m most likely not getting him down, and trying to get him down, I’m gonna get tired and I’ve got a five round fight where I’m getting picked apart or destroyed. So I’m taking my chances standing,” said Serra.

No one saw that strategy coming, but a look back at his fight with Parisyan showed that “The Terror” had hands, and heavy ones at that.

“When I had to fight Karo Parisyan, I couldn’t do too much grappling because I had a meniscus tear,” Serra said. “I could still run and do a lot of boxing, but I couldn’t do a lot of straight up jiu-jitsu. But in that time I did a lot of hands and we got a lot of rounds in. And that was the first fight where I actually demonstrated it. I developed timing with a lot of stuff, and it wasn’t honed yet, but there was a glimpse of it there.”

The glimpse turned into what Pantera might describe as “A Vulgar Display of Power” that stunned St-Pierre and the fans in attendance and watching around the globe.

“I knew with what I was doing in sparring, hurting guys with 16 ounce gloves, that if I stood in the pocket with him, sure, he could hurt me, but I could really do some damage,” said Serra.  “That’s why I was so confident that one way or the other, it was going to be an exciting fight and a do or die situation. I’m happy it was ‘do.’”

At 3:25 of the first round, Matt Serra was a world champion.