Today we look back at one of the greatest fights in UFC history, the rematch between Matt Hughes and Frank Trigg
By Thomas Gerbasi, on Twitter: @TGerbasi • Apr. 16, 2020

In 2015, the April 16, 2005 rematch between Matt Hughes and Frank Trigg was given its rightful place in the Fight wing of the UFC Hall of Fame. Today, 15 years after that unforgettable battle, we look back at what the two combatants told me in 2015 about the co-main event of UFC 52.

“Anthony Giordano would do the interviews back then, and he was very good,” Hughes recalls with a laugh. “He would go to my opponent and talk to them first and would always come back to me and say Frank said this or Joe said that, and he would get some heat out of me. If he interviewed me first, he just didn’t have anything to go off of, so he was smart. And I remember Giordano saying, ‘Hey, he (Trigg) said the first fight was a fluke and he’s training harder this time, and he’s got a better wrestling pedigree.’ He was bringing stuff out of the blue and I would get heated. I knew when Anthony showed up, I would say, ‘Keep your cool, keep your cool,’ (Laughs) but he was good. He got under my skin and he got the sound bites he needed.”

“To me, rematches only benefit the loser of the first fight,” he said. “I had nothing to win. And (UFC President) Dana (White) called me with it and I said, ‘Dana, I don’t want that fight.’ He goes, ‘I understand, but that’s all we’ve got right now.’ Okay.”

“We were hoping (for a rematch) and I was talking my way into it at the same time,” Trigg said. “Beating (Dennis) Hallman a second time helped a little bit because he already beat Matt twice. Beating (Renato) Verissimo helped because that was a controversial win for Matt. It went to a decision and people really thought that Verissimo had won. And I beat him decisively. So I thought now maybe I’ll get a shot back again. It really was a thing of me kind of talking my way into it and not giving them any other option.” 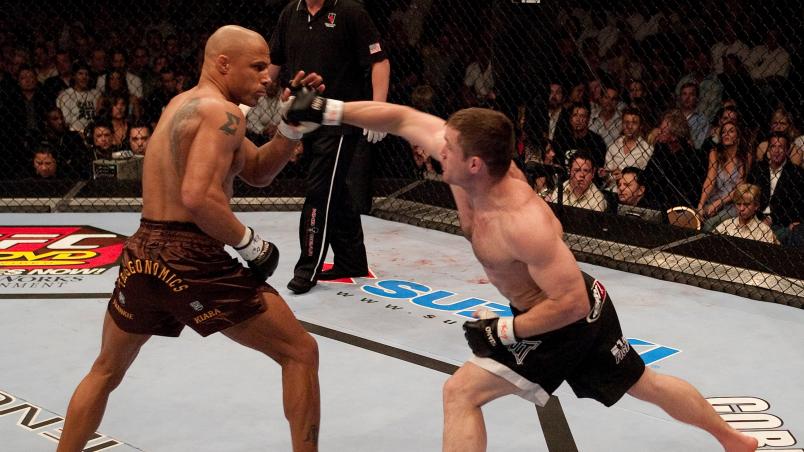 “There’s only one clip that I enjoy watching,” Hughes said. “When I pick Frank up and run him across the Octagon. Before that moment, my corner would have thought that I was out, that they were going to come into the Octagon and I wasn’t going to get my hand raised. I’ve been that cornerman, so I knew exactly what was going through their mind. And I’m a Christian, so I don’t like to use a lot of terms, but I like to use the word resurrection because I was out, done, and should have been the loser that night. But I picked him up and ran across the ring, and I love watching my four cornermen jump out of their seat. If I was the cornerman, I would have been so excited that one of my brothers is back in the game. That’s the only clip I care to watch of all my fights and I don’t even watch me. I watch my four cornermen. That gets me excited.”

Once Hughes got Trigg on the mat, it was game over, as he worked some ground strikes, opened a cut and then sunk in a rear naked choke that produced a tap at the 4:05 mark of the first round. To this day, you can get chills watching the fight, even though you know the ending, so it was no surprise when it was the first bout put into the Fight wing of the UFC Hall of Fame. Well, maybe it was a surprise to Trigg.

“I wasn’t expecting it,” Trigg said. “It was really out of the blue. So when I got the call, I actually had to ask them to repeat themselves a couple different times. I wasn’t analyzing what they were actually saying.”

As for Hughes, already inducted into the UFC Hall of Fame in 2010, it’s something to remind him of a special time in the history of the sport.