This Saturday, light heavyweight contender Jimi Manuwa competes in his hometown of London, England for a UFC Fight Night rematch against Jan Blachowicz. The two first met in April 2015, with Manuwa going the distance for the first time in winning a unanimous decision over the Polish standout.

Nearly three years later, a lot has changed, with Manuwa now sitting at No. 4 in the rankings while Blachowicz has rebounded from a 1-4 streak started with his bout against the Londoner to win two straight. In other words, this is a pivotal matchup for these 205-pound contenders, but one thing that hasn’t changed is Manuwa’s approach to the sport.

As you’ll read in this flashback to the days before the UFC debut of the “Poster Boy” in 2012, the knockout is always his goal, and while Blachowicz took him the full 15 minutes the first time, Manuwa will be looking to make his work day a lot shorter at the O2 on Saturday. 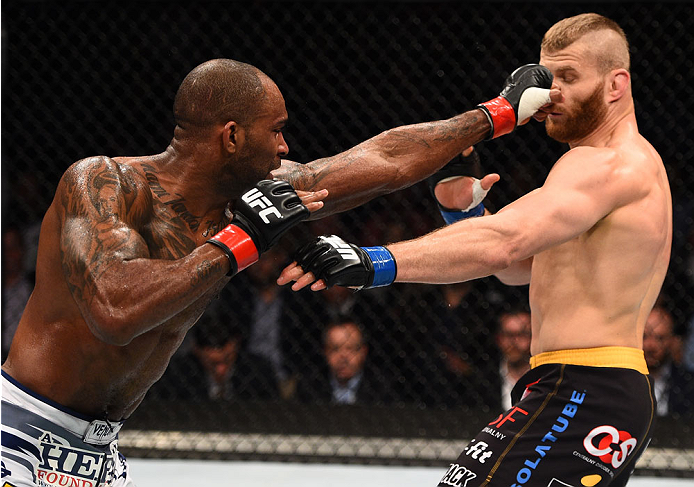 With 10 knockouts in 11 wins as a pro mixed martial artist, Jimi Manuwa has a bit of pop in his punches. Some would call it Tyson-esque. But if you watch the London light heavyweight in action and look at the way his opponents fall down after he hits them, his power brings to mind another knockout artist from the world of boxing: Prince Naseem Hamed. And if you never saw “Naz” in action, suffice to say that when he hit people, they fell in funny ways, like they were drilled with a shotgun and not a gloved fist.

Manuwa, dubbed the “Poster Boy,” has that kind of stopping power. And he knows it.

“Even before I started fighting, I always knew I had power and I was always good at fighting on the streets,” said the unbeaten Manuwa, who makes his UFC debut this Saturday in Nottingham against Kyle Kingsbury. “It’s just self-belief. I know when I hit someone, it hurts. I put combinations together, and you know as a fighter when you hit someone good. I know I have power in every punch and I don’t really do any feeling out or stuff like that; I go straight in.”

That’s talk from a lot of fighters. Not from the 32-year-old Manuwa, who has long been one of England’s most exciting prospects for precisely the reason he pointed out – he goes straight in. The way he fights, it’s kill or be killed, feast or famine, or whatever all or nothing adage you want to use. Yet despite his ferocious attack when it’s fight night, he’s not in this game just to throw hands and pick up a paycheck. His goals are a lot loftier than that. 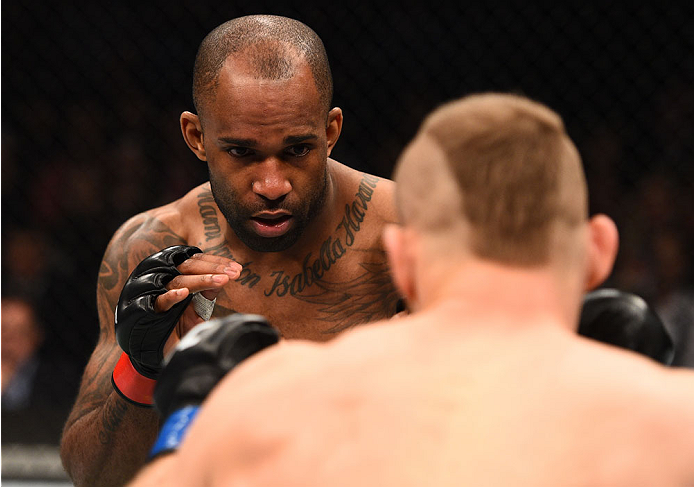 “I’m not in this just to be a fighter and just to say yeah, I did that,” he said. “I want to be the best in the world, and that’s the type of attitude I have towards anything. In anything you do, you’ve got to be the best in it.”

Early on, he didn’t have that kind of focus. A native of Sacramento, California who moved with his family to Nigeria when he was three before setting in the UK at the age of 10, Manuwa got into his share of trouble growing up, and it wasn’t until he was 28 that he found his way to a MMA gym.

“My first fight I had three weeks’ training,” he laughs. “I did a couple classes, and when I saw my mate fight, I said ‘get me a fight.’ And the next week he came back and said ‘you’ve got a fight in two weeks,’ so I started training for it and I haven’t looked back since.”

That first fight, against Tom King on July 26, 2008, lasted two minutes and 20 seconds, and his opponents after that didn’t fare much better. By late 2011, the UFC came calling, offering Manuwa a spot on the UFC 138 card last November. But he turned it down. With no regrets.

“For one, I was just coming off a long injury, and it was kinda like the wrong time,” he explains. “And at the time, I didn’t feel like I was fully prepared. I wanted to work more on my wrestling and certain other aspects of my game.”

So off he went, back to the gym he opened in Croydon, Lion’s Pride MMA, to work with head coach Dino Miringou and the rest of his team.

“I’ve always liked being business-minded when I was a kid, and I just thought that if I got the opportunity, I’d like to do something like that,” said Manuwa of opening his own gym. “When I first started training, I didn’t have one gym where I could go to and have all the facilities there. I used to go one place for my kickboxing and another place for my jiu-jitsu, I used go to a strength and conditioning coach, I would go somewhere else for wrestling, and I thought it would be good to have everything in one place and have all the coaches working together, and that’s what I’ve created in Lion’s Pride. So I think it’s great for all the up and coming fighters we’ve got to have something that I didn’t have when I started.”

That’s not the only reason he opened the gym, as he knows that if kids (and adults) have an outlet to keep them off the streets and out of trouble, it could create brighter futures instead of dead ends.

“I’m 32,” he said. “I started fighting when I was 28, and before that I was doing business and stuff like that, and before that I was getting in trouble. If I would have started fighting in my early 20s, I could be UFC champion by now, and I could even be retired by now and doing other things. So I think it’s good for a lot of younger people to start early and be the best they can. That’s the only thing I regret – not starting martial arts earlier. There are loads of people like me on the street who can fight, but haven’t got anything good to work for, so it’s giving people the opportunity to go do it. In our gym, we’ve got loads of people that have come off the street, and kids who just left school, and everyone’s working at being champion in their own weight divisions.” 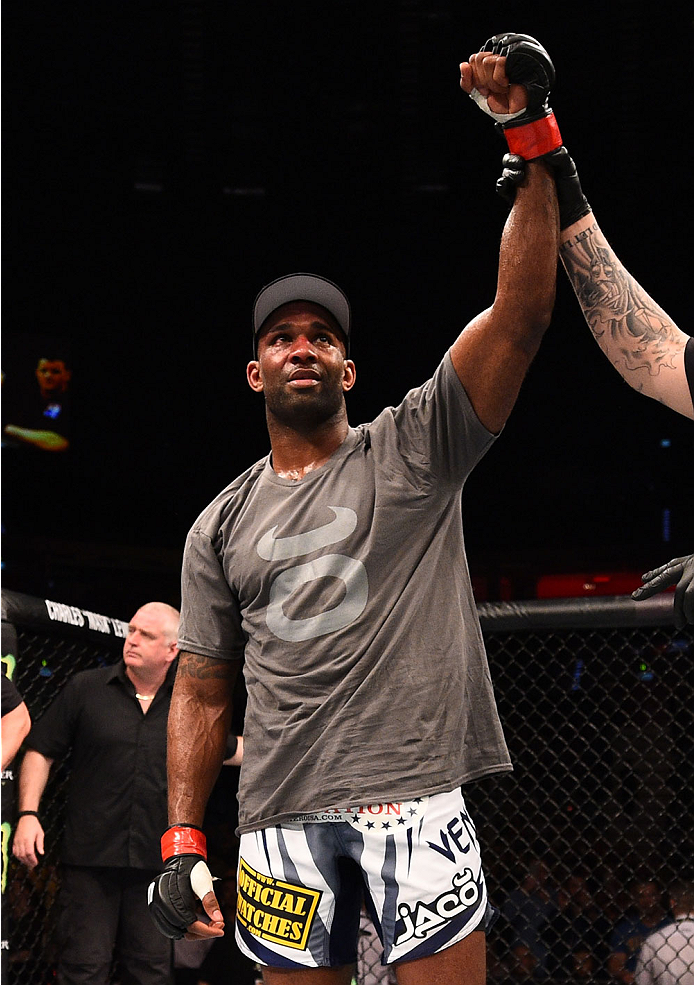 That maturity and forward thinking bodes well for his future in the UFC should the rest of his game catch up to his striking. Not that his last foe, Antony Rea, was able to find out, as a spinning backfist and kick to the head cut the veteran open in their December bout and prompted a stoppage after the first round. After this victory, Manuwa answered the UFC’s call.

“I always knew I was going to end up in the UFC because that’s just my attitude,” he said. “I had no fear of losing or not being recognized to go to the UFC; I always knew that was in the cards, so I just wanted to get a bit more experience and stuff like that, and then make a step.”

This Saturday, that step leads him to Nottingham and what should be an entertaining scrap with the hard-hitting and hard-headed Kingsbury, a fighter who may take Manuwa past the first round for only the third time in his career.

“I always prepare for a 15 minute fight,” said Manuwa. “I’ve worked loads on my cardio and my wrestling, my defense, my offense, and I’m just ready to fight, I don’t care who it is. I respect Kyle Kingsbury a lot and he’s a great fighter; he’s very durable and went three rounds with Stephan Bonnar, who’s very tough as well, and I’m ready for a fight. But my fights never go the distance because I’m not that type of fighter. Everyone knows that.”

If they don’t, they’re about to find out real soon. And Manuwa can’t wait to show them.

“Just look at my fights and look at how I fight,” he said. “That’s why I’m in the UFC. I don’t mess about. I come to do the business and I don’t come to win rounds, I come to win the fight and finish the fight. I don’t do decisions.”