Flashback: GSP and The Muscle Shark

Looking back at Georges St-Pierre vs. Sean Sherk... 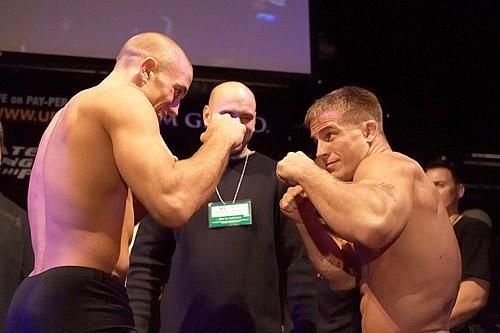 Owner of the UFC welterweight title since 2008, it almost seems like Georges St-Pierre has always been champion of the 170-pound weight class. But back in 2005, the then-24-year-old was just another contender looking to get back into the title picture after losing his first championship fight against Matt Hughes in 2004.

After that defeat (the lone loss of his career) GSP won three straight and was looking to make it four at UFC 56 in November of 2005 against Sean Sherk. Here’s a look back at St-Pierre before that pivotal meeting with “The Muscle Shark.”

A championship. Georges St-Pierre thinks about it a lot; while training in the snow and rain, while putting himself through the paces in the gym with MMA standouts like David Loiseau and Patrick Cote, or even during everyday mundane tasks.  It’s the goal of practically every fighter who steps into the UFC Octagon, but for the 24-year-old Canadian, it’s a little bit more real, so real that he can almost taste it.

But when he starts thinking about it too much, he steps back, clears his mind and refocuses on the present, and not the future.  The present for St-Pierre means a bout Saturday night with Sean Sherk at UFC 56 – Full Force.  Sherk has a championship on his mind as well, and after a lengthy hiatus from the UFC, he’s even hungrier for redemption because he knows what it’s like to be on the outside looking in.  For Sherk, a win over the welterweight heir apparent practically pushes him on to champion Matt Hughes’ doorstep.  St-Pierre is in the same position.

“I think he (Sherk) is one of the best guys in my division and my goal is to be champion so I have no choice but to fight this guy because he’s a step before my goal,” said St-Pierre.

Luckily for St-Pierre, Sherk is a veritable clone of Hughes in terms of style, and the Quebec native will likely get a good gauge of how he would fare in a 2006 rematch with the champion (provided Hughes gets by challenger Joe Riggs on the same card).  And frankly, at the core of St-Pierre’s intense commitment to the game is a desire to beat the man who handed him the only loss of his three year pro career, via submission in October of 2004.  It’s not a trash talking, ‘I hate you’ type of intensity, but an athlete’s focus on competition at the highest levels and achieving his own peace.

“I gave him too much respect,” said St-Pierre of the first Hughes bout.  “I was going into that fight to survive, but I have no excuses - he beat me fairly and squarely.  Next time it’s going to be a different story because I’m a different fighter now.”

With three wins since his lone defeat, St-Pierre has earned his status as one of the top welterweights in the world.  But it was that third win - over Frank Trigg in August - that cemented his position as one of the sport’s future stars.  Against the two-time title challenger, St-Pierre was frighteningly efficient and dominant.  Trigg was never in the bout, and when the end came at 4:09 of the first round, it was impossible to ignore “Rush” and how far he had come since his loss to Hughes.

“I’m a lot more confident mentally,” admits St-Pierre.  “I believe a lot more in myself and technically I’m a lot better now.  People who saw my last fight against Frank Trigg saw that I was a lot better than I was (against Hughes).”

That was an understatement.  But can he turn the trick twice in a row when he faces Sherk?  St-Pierre is expecting an even better version of the Minnesotan than we saw when he last graced the Octagon in 2003.

“I think he’s a lot better now,” said St-Pierre of Sherk.  “I’m ready for him and I trained very hard.  He’s a short guy but he’s very good at getting inside, so I’m going to try to stick to my game plan and win.”

That’s as far as you’ll get with St-Pierre, one of the sport’s true gentlemen, when it comes to talking up an upcoming fight.  And that’s refreshing in any walk of life these days, but especially in a much maligned sport that still has negative stereotypes attached to its athletes.  St-Pierre knows of this prejudice first hand.

“We’re in a very rough sport, and a lot people, especially in my country, don’t consider me to be a real athlete,” he admits.  “They look at us as street fighters or brawlers.  So it’s important for us to give a good image of the sport and to be gentlemen outside of the Octagon.  This way we show the teenagers a good image and we’re role models for these people.  It’s important to walk the straight line.”

That means doing all the interviews, signing all the autographs, taking all the pictures, and basically being an ambassador for the game.  St-Pierre embraces that role, and US fans have responded in kind.

“I like the American crowds and when I go to fight in Vegas I feel like I’m at home,” he says, but to get ready for a tough fight, there’s no place like his real home back in Canada, where the rough weather this time of year is in stark contrast to that of Las Vegas.

“It’s very cold and when I do my sprints and its raining I have no choice but to do them,” he said.  “Some of my workout is outdoors, so even if it’s snowing or raining, I still do it.  When the weather is very bad outside and I do my sprints, I have a hard time breathing, I have to deal with the cold, the ground is not solid and it’s full of water so I slide and slip sometimes.  But when I go into the Octagon, it’s a beautiful place.”

It’s a place he’s wanted to be in since he was 12 years old and he first saw a skinny kid with a gi named Royce Gracie run over the competition in the first UFC.

“When I saw Royce Gracie in the first Ultimate Fighting Championship, it was like the Super Bowl of mixed martial arts,” said St-Pierre.  “You can be a karate champion, judo champion, or jiu-jitsu champion, but when you’re the ultimate fighting champion, you’re the champion of everything all mixed together.  And when I saw Royce Gracie beat everybody and he was one of the smallest guys in the entire competition, I decided that that was what I wanted to do for a living.”

Now he’s here, and he doesn’t plan on going anywhere anytime soon.  But the only way to insure that is to keep winning.  On Saturday against Sean Sherk, and next year against whoever holds the welterweight championship when he gets his shot.  He’s ready for it all – even if he has to force himself not to think too far ahead.

“I know becoming champion won’t be easy,” said St-Pierre.  “I have two more opponents to fight – Sean Sherk, and if everything goes well, I’m going to ask for a title bout.  Hopefully it’s going to happen and then I’m going to have to beat the champion.  I try not to think about it, but it is on my mind.  Right now though, I’m focused on Sean Sherk.”

Keeping his mind on the business at hand, St-Pierre tore through Sherk en route to a second round TKO win. (Click here to see the fight ) Sherk would only stay at 170 pounds for one more fight (against Nick Diaz) before moving to the newly reinstated lightweight division, where he would win the title in 2006. As for St-Pierre, a UFC 58 win over BJ Penn put him back in a title fight with Hughes, which he won in 2006, only to lose it in his first defense against Matt Serra. GSP hasn’t lost since, regaining the crown and defending it against all comers. Next up, at UFC 158 on March 16: Nick Diaz.