On June 11, Glover Teixeira defends his UFC light heavyweight title for the first time against Jiri Prochazka in the main event of UFC 275 at Singapore Indoor Stadium in Singapore. It’s the next chapter in the storied career of the inspiring Brazilian veteran, and in this flashback from 2020, we check in with a fighter who never thought he would be fighting, let alone winning a title, at the age of 42. 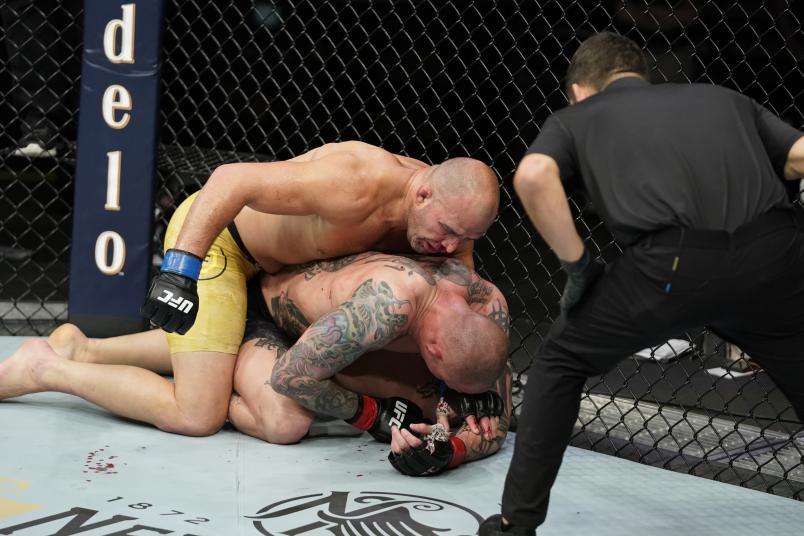 Glover Teixeira never thought he would be fighting when he was 40 years old, especially on those days in training camp that never seemed to end.

“I thought I was gonna retire when I was 35,” said the light heavyweight contender, still going strong as he approaches his Wednesday main event against Anthony Smith. “I never really thought I would be fighting at 40 years old and still loving it. Maybe that was because I was training so much and overtraining most of the time, and you get grumpy and get stressed. There were a few camps when I was like, I can't wait until I retire; I can't take this no more. And now I look at Anderson Silva, I look at (Daniel) Cormier, and I'm like, ‘I'm not gonna lose to those guys, I'm gonna keep fighting.’ (Laughs) I love this.”

He means it, too. And though many fighters who hit the big 4-0 are clearly on the downside of their career and have the results to show for it, Teixeira won three straight over Karl Roberson, Ion Cutelaba and Nikita Krylov, and he enters his first fight of 2020 still in the top 10 at 205 pounds. In the process, his fan base has swelled to include those in the MMA community who have grown with the sport. In other words, Teixeira is out there for the 30, 40 and 50 somethings. And you can throw in an 82-year-old member of his gym in Danbury, Connecticut, as well.

Like all fighters, the younger version of Teixeira thought he could walk through walls, and he fought accordingly, racing out to a 17-2 record before getting his long-awaited shot to compete in the UFC in 2012. Once in the Octagon, he didn’t stop, winning five straight bouts and earning a shot at Jon Jones’ light heavyweight crown in April 2014.

Teixeira would lose a decision to Jones in the main event of UFC 172, then a second straight bout to Phil Davis six months later, but he rebounded, with his resilience being one of the key elements of his success. That doesn’t mean he didn’t hear the naysayers.

“Six years ago, I lost two fights in a row, Jon Jones and Phil Davis, and people were saying, ‘Glover is done,’” he said. “Then I got back in title contention again and I lost it again, but I keep grinding, I keep going, I keep pushing and I keep getting better.”

And there’s why Teixeira, at 40, has found a second wind. Unlike most fighters, who keep the same style throughout their career, only to find trouble when Father Time starts knocking on the door, Teixeira made the adjustments he needed to when what used to work wasn’t anymore. Maybe that’s why the hard-hitting slugger dusted off his jiu-jitsu black belt to submit Roberson and Cutelaba. That attitude, along with some help from the folks at the UFC Performance Institute and a willingness to train smarter, not harder, has Mr. T in range for another shot at the belt.

“You always want to get better,” Teixeira said. “Mistakes come, I lost fights here and there, but I'm in a stage in my life right now where I'm not stressed as much as I was. I'm always a happy guy and not too stressed, but when it comes to camp, I was always training so much and so hard, and sometimes I overdo it. At this time in my life, I feel I got the point. I reached out for help and the UFC PI has been amazing to me. The people there, the conditioning coaches, the Trifecta food, and it's so much easier to do camp. It's been amazing.

“I stopped training like a maniac,” he continues. “And that's when I was like, 'I'm not 25 anymore.' I started losing some fights, and you've got to humble yourself and say, ‘You know what, I need to learn, I need to get better.’ There's a saying that it doesn't get easy, you just need to get better. I think that's what you need to do in your life and I'm proud of what I've done.”

As for the possibility of facing Jones again, Teixeira is confident that he’ll get another shot, but if he doesn’t, there will still be summer barbecues in Danbury and a life he’s loving.

“I take it fight by fight,” he said. “I'm living my life happy, I love what I do and I'm not pressured. I want to get the title fight and I will fight Jon Jones again differently if I ever get to fight him. But I'm not worried too much about that. Whatever it is, it is. I don't put pressure on myself anymore. If it happens, it happens. If not, I'm doing my best.”