Flashback: The Comeback of Dominick Cruz

Flashback to 2014 when Dominick Cruz returned to the Octagon after a three-year layoff to face Takeya Mizugaki.
By Thomas Gerbasi, on Twitter: @TGerbasi • May. 2, 2020

When Dominick Cruz enters the Octagon on Saturday, May 9 to face Henry Cejudo for the UFC bantamweight title, some believe it may be too much to ask for the promotion’s first 135-pound champion to turn back the clock and beat “The Messenger” for the belt. Then again, those same people counted Cruz out before he beat TJ Dillashaw to regain the title he never lost in the Octagon in 2016, and even before that when he was about to face Takeya Mizugaki in 2014 after a three-year layoff.

But each and every time, Cruz came back and wasn’t as good as he was before, but better. He expects another career-defining effort in Florida in the UFC 249 co-main event, and to get you ready for the return of “The Dominator,” we look back to a pre-fight interview with him before the Mizugaki fight, which he just happened to win in 61 seconds.

Dominick Cruz doesn’t even let the question finish before he’s answered it. He knows what it is, he’s heard it a million times before, and each time, the response was unchanged.

For the record, the question was, after two knee surgeries and a groin injury that has kept him sidelined since October of 2011, did he ever wonder if he was going to hear the words “welcome back” again.

So he knew he was going to hear them?

That’s a strong young man right there, one who, not surprisingly, earned the title World Champion next to his name. 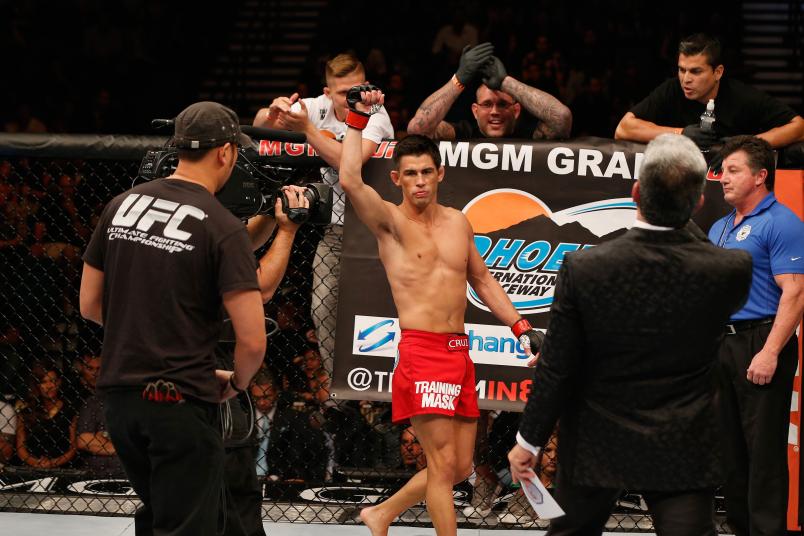 “I knew I was young, I was passionate about the sport, and more than anything I knew that I just needed to figure my body out,” Cruz said of the road back. “It was just a matter of getting myself back to where I’ve been. It’s just patience. The second you let something creep into your mind, it doesn’t serve you. So I don’t allow things that don’t serve me in a positive way enter my mind. I expel them immediately.”

Like the aforementioned questions. It may be why after returning from the knee surgeries only to be forced out of a UFC 169 bout with Renan Barao earlier this year due to a torn groin, Cruz went off the radar, uninterested in talking anymore about the bad luck that haunted him for over two years and cost him his UFC bantamweight title.

“It’s not that I didn’t want to answer the questions again; it’s that it didn’t make any sense,” he said. “It’s just going to be the same stuff. People want to hear the same things. ‘Dominick, you’re out again, how does that make you feel?’ Well, everybody knows the answer to that question, so why are you going to ask me? I didn’t need to answer those questions. And to be honest, I didn’t hold the title anymore, so there was no pressure on me anymore. What I thought and what I said was the division was not my responsibility any longer. They said it’s not yours anymore; it’s Barao’s. So I said, okay Barao, that’s your responsibility to take care of it. I need to focus on myself for a little while. And I dropped off the radar to focus on me, to get my mind back to where I needed it to be and to get my body back into full form. Really, I was tired of talking about it, and ready to be about it. And now I’m here and I can be about it, my body’s working for me, and so I’m here talking.”

On Saturday, September 27, Cruz will make his return to active duty against number six-ranked contender Takeya Mizugaki at UFC 178 in Las Vegas. It’s a highly-anticipated bout, not just because of Cruz’ return, but also due to the title implications for the winner. Of course, Cruz could have jumped right back into a title fight, but he chose to get one more fight in before he attempts to go after his crown again.

“The only reason why I didn’t go straight into a title fight isn’t because of the opponent; it’s because of the amount of rounds that a title fight requires,” explains Cruz. “And what I learned getting ready for the Barao fight and getting injured was, it wasn’t fighting Barao that was the problem and it wasn’t fighting five rounds; it was training in a five-round camp. That’s the problem. The workload literally doubles and your body has to be prepared for that. And that’s what I need to adjust to again. It has nothing to do with anything other than that. I just had to get my body strong and back into that work mode, and it is now. And really, what is it going to hurt me fighting a top guy before I fight for a title anyways? It’s only going to make me better. Fighting a guy like Mizugaki is only going to challenge me, it’s not going to make me a worse fighter by any means, and it’s just offering more of a chance for negative things to happen to me, which is also going to make me more mentally strong.”

That’s been the greatest hurdle for the 29-year-old to get over. It’s not all physical, as some might imagine, but the reality of dealing mentally with those physical issues and staying sharp the whole way through is the hard part.

“I’m not a patient guy,” he admits with a laugh. “I’m still working on it to this day, but it’s definitely something I’ve focused on, and that’s how you learn it. You have to focus on patience, you have to want what patience gives you, and once you do that, you’re in the right direction.” 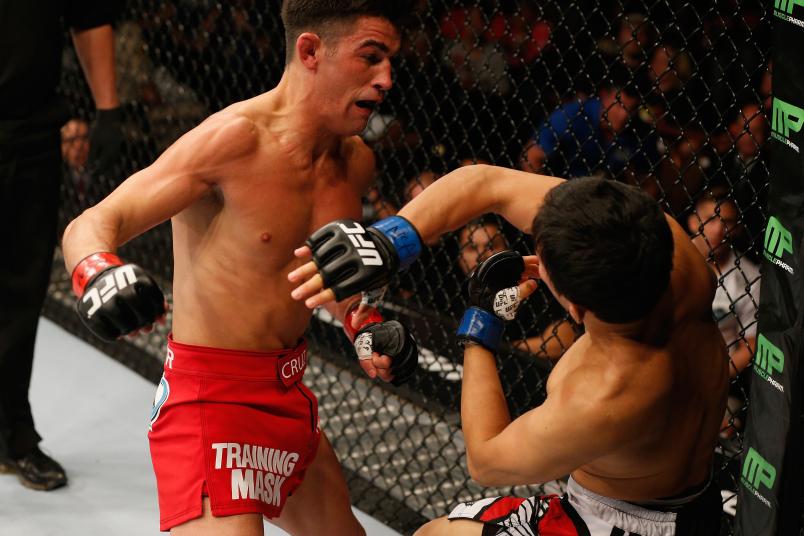 And when those negative thoughts inevitably break through his defenses, he has learned how to combat them.

“It’s constant practice. I have a lot of things all over my wall in my house and I have a lot of self-talk that I do. A big thing is body posture, self-talk and focus, and whenever I feel myself going towards a negative direction, I focus on those three things. I fix my posture, stop feeling sorry for myself, I start saying positive things to myself, and I change my focus to create a positive mindset. Those things just really bring me into a good direction.”

Apparently that direction is up, and it’s the only thing Dominick Cruz has wanted to hear over the course of his Season in Hell. Now it’s time to fight. Not against Mizugaki, not against Barao, and not against new champ T.J. Dillashaw; but against himself.

“I miss challenging myself, I miss competing against myself,” he said. “What nobody knows about me is I don’t compete against anybody but me. I am my own worst enemy and I am my own biggest competitor. As selfish as it sounds, everything I do, I do it to challenge myself and see what I’m made of. If you can’t impress yourself and challenge yourself, then you’re not really doing anything, in my opinion. Everybody’s always going to have negative things and positive things to say about you, but all that really matters is what you believe and feel about yourself, and that’s something that I find in every single fight.”