Little known fact about me – Bruce Buffer, the Voice of the Octagon, was my first boss in mixed martial arts. Yes, in those pioneer days of the internet in 2000, I was introduced to Bruce through my friend and future business partner Gary Randall, and was told that Bruce wanted to build up the original content on his site at the time, the BufferZone. I was all-in, but once he set up my first interview with then-UFC heavyweight champion Kevin Randleman, I was really all-in. Good times. And like I tell anyone who asks me, Bruce paid well and he paid on time. Two decades later, I’m proud to call him a friend, and yes, it’s true, he is the nicest guy on the planet.

But enough about me, here’s a Q&A we did before the historic UFC 200 event in 2016. And yes, I still want to see the Buffer 360 make at least one more appearance.

TG: How did “It’s Time!” come about?
Buffer: Every morning I wake up, look in the mirror before I shave. I don’t live on my laurels, I’m all about my best performance today, my best work efforts, my best efforts as a human being. So every time I wake up, I would always say to myself, “It’s time.” And that’s truly what I mean by it. This is the time to perform. I had a great day yesterday, that was history. Today is the future and today is the present. So this is what I focus on. So when I was in the Octagon, I would always say in the beginning years ago, at the start of the show, “It’s time to begin the Ultimate Fighting Championship.” And I would roar that out, which evolved into the main event, and I thought, you know, we’ve been here in this arena for five hours, these fighters have spent six to eight weeks or more training for this one moment. It truly is time. And those two words can be put in front or behind any sentence and it will fit. “It’s time” works and it’s what it’s about. It’s a call to arms. It’s the clarion call of the pure integrity of the competitive spirit. That’s why I roar it out in the main event. 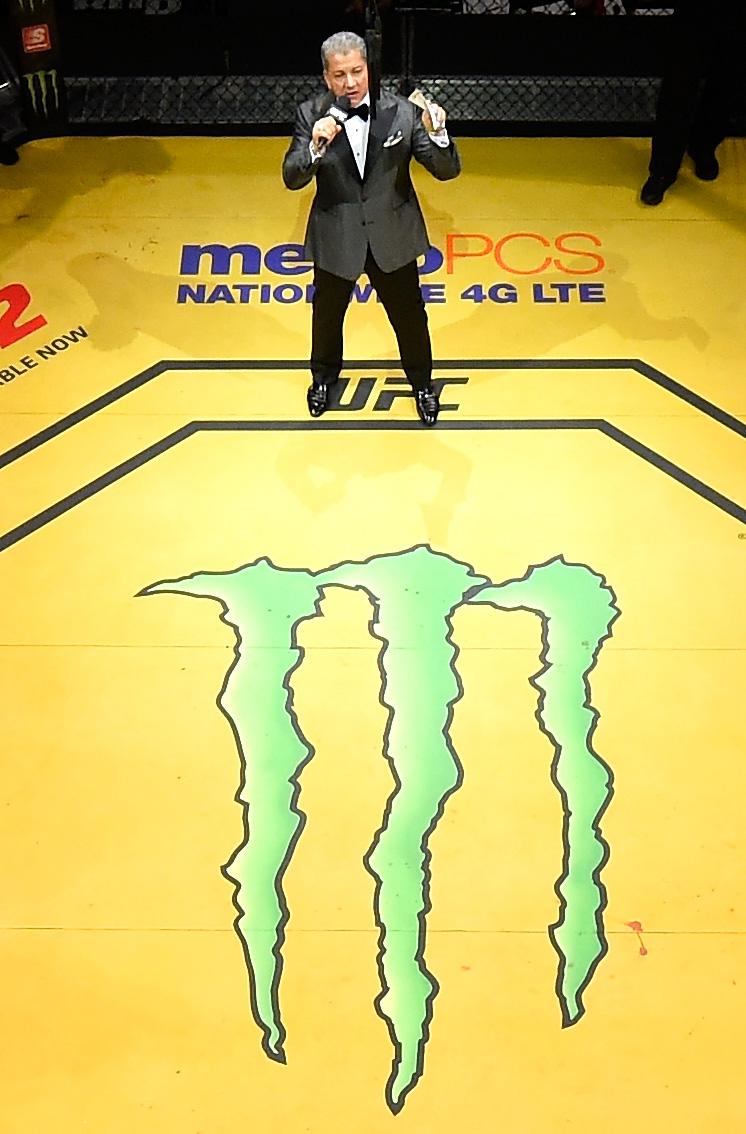 Every ring announcer wants to have a catchphrase, but most fall short. Why has “It’s Time” resonated and connected the way it has?
The key is that when I announce, I announce with passion. I don’t think there’s any other announcer out there, with respect to all announcers, that have the true passion that I have for what I do, for the fighters that I introduce and for the sport that I represent. So I was never phrase-driven. I got into this announcing role 20 years ago, and I didn’t have a catchphrase. For almost 30 years, I’ve managed my brother’s career and I trademarked that phrase (“Let’s get ready to rumble”) promptly, I marketed it, and I created all the sales out of it. If anybody could have copied anybody, it would have been me. But I never wanted to be Frank Sinatra Jr. So I thought, I don’t need a phrase. It’s not what I say, but how I say it. And then one secret of business is that businesses are strong when they grow organically. So when I started putting my all into “It’s time,” I put my passion and my emotion into it, and I’m feeling that moment, and that passion is recognized around the world. They recognize that it’s real and that was it becomes organic because they truly appreciate it. That’s the best explanation I can give.

When you’re in that moment, was there ever a time when you got so caught up in it that you forgot what to say next?
No, because when I announce, I don’t care if it’s 40,000 people, 20,000 or 5,000, I am so focused on the fighters I’m announcing that I block out the audience. I’m in such a cerebral, passionate, adrenalin-filled moment that all I’m doing is wanting to get those fighters lifted to a higher level than they are when they walk in the Octagon. 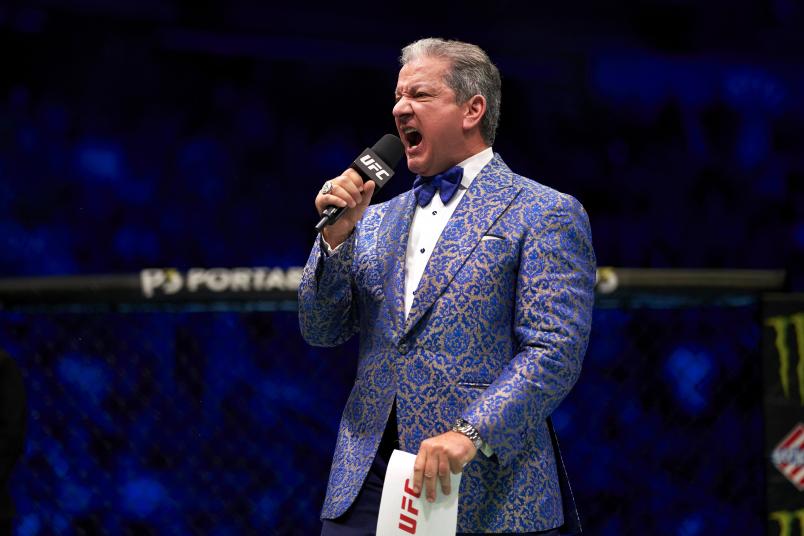 UFC 200 is a huge event. You were there for UFC 100 as well. How would you compare the two? Is there more of an excitement level for certain cards than others, or is it the same no matter what the fight is?
Each fight has its own flavor and holds its own moment of excitement for me personally to perform at my bets and give a hundred and fifty percent. But everything has evolved so much since then (UFC 100), with so many stars and so much forward movement going up the mountain of popularity worldwide that the UFC has been experiencing, that now we’re in the culmination of what could be the greatest UFC event ever. The card is sick, with the recent addition of Brock Lesnar just adding to it. It’s going to be a whole other moment. Every individual show holds its own romanticism and its own drama. And the moment that I think we had the greatest UFC ever, within months there’s the next greatest UFC ever. But UFC 200, this is gearing up to be the greatest UFC ever.

As someone who was there during the UFC’s “Dark Ages,” what’s it like to see it where it is today?
When I entered the sport and I first dealt with (then-owner) Robert Meyrowitz, who gave me my start, my whole intention was that I believed this could be the greatest thing ever in the fighting sports. It needed to go from spectacle to sport and changes needed to be made. And in order to grow with it, I had to be part of it. And since then, I’ve done everything I could to help promote the sport and be an ambassador of the UFC 24/7 everywhere I go.

Everybody remembers the Buffer 360 at UFC 100. What should we expect tonight?
The 360 has been retired. I do not rehearse. I do not plan on doing what I’m doing. I go into that Octagon and I want to feed off the energy of the crowd and the adrenalin of the moment, and when I turn, go to one knee, jump, or do whatever I do, this is truly an act of passion during my announcing and performing in the Octagon. Could I do a 360 again? Of course. Could I do a 540? Probably so. But the bottom line is, I’ll always give my all and I guarantee that the performance I will give at UFC 200 will hopefully be as epic as that show will be. But the show isn’t about me; it’s about the fighters. I’m just going to do my best, and I guarantee I will give you a performance.