Flashback to 2008, when Brock Lesnar became the heavyweight champion of the world at UFC 91 against Randy Couture
By Thomas Gerbasi, on Twitter: @TGerbasi • Apr. 29, 2020

On a night when five of UFC 91’s nine fights ended by submission (even Matt Brown got a tap out win), it was the heavy hands of Brock Lesnar that made history, as he defeated Randy Couture for the UFC heavyweight title in Las Vegas on November 15, 2008.

The first man in UFC history to win the heavyweight championship in his fourth fight was Randy Couture. In the UFC 91 main event, Couture was forced to make room in the history books for the second man to achieve the monumental feat – Brock Lesnar, who stopped Couture in the second round to take the belt.

Couture – a five-time UFC champion and a member of the organization’s Hall of Fame - had made a career of overcoming the odds, and though he had his moments in the scheduled five rounder, in the end, the power and size of the 6-3 ½ , 265 pounder was too much for the 220-pound Couture to overcome, especially at 45. But Couture, fighting for the first time since August of 2007, didn’t blame ring rust or age for the loss. Instead, all praise went to the new king.

“Those were some big hamhocks coming at me,” laughed Couture after the fight. “He’s a big guy and he caught me with a big shot.”

With the crowd chanting ‘Randy, Randy’, the bell rang for what was dubbed “the biggest fight in UFC history.” Couture scored with a quick right hand and Lesnar attempted a couple of knees before tying the champion up against the fence, trying to wear Couture down with his 265 pounds. After a brief stalemate, the two separated and circled before Lesnar shot in for a takedown. Couture fought it off but wound up pinned against the fence briefly before Lesnar finally finished the takedown and put Couture on his back. But just as soon as he was down, Couture reversed position and the crowd erupted. Lesnar quickly regained control though and again tried to use his size to exhaust Couture. With under a minute left, Couture made his move and got back to his feet. The two traded knees and Couture looked for the takedown, but the bell intervened.

The second began with Couture landing a couple of quick punches, which were answered by a right from Lesnar that briefly wobbled the champion. The two reconvened at the fence, and both fighters landed with hard shots as they separated. The ensuing exchange saw Lesnar get cut over the right eye, but as Couture moved in, the fighters locked up at the fence again. After they broke, a right hand behind the ear dropped Couture, and Lesnar immediately pounced, landing a series of hammerfists to the head that forced referee Mario Yamasaki to halt the bout at 3:07 of the second round.
WATCH ON UFC FIGHT PASS 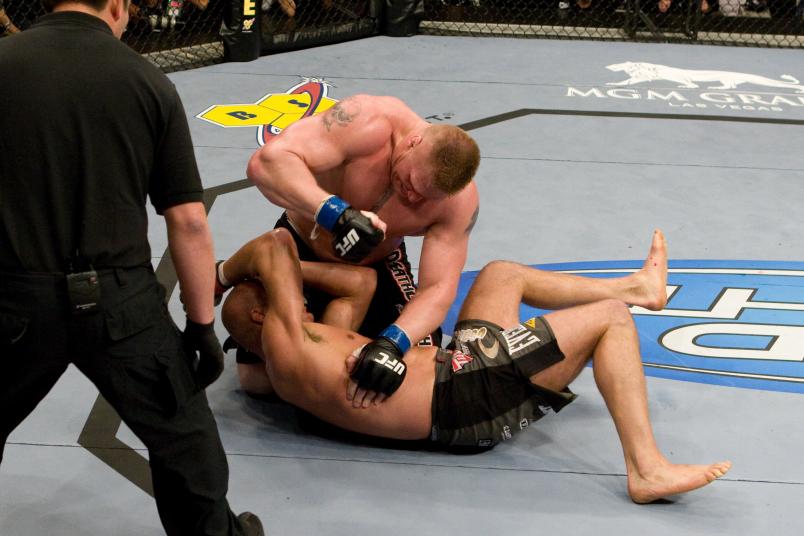 If there were any doubts as to who the number one contender to the lightweight crown was, Kenny Florian removed them as he submitted Joe Stevenson in the first round.
WATCH ON UFC FIGHT PASS

Dustin Hazelett showed off his brand-new Brazilian Jiu-Jitsu black belt in style, scoring an entertaining first round submission win over Tamdan McCrory in a battle of welterweight up and comers.
WATCH ON UFC FIGHT PASS

Unbeaten middleweight contender Demian Maia continued to impress in the main card opener, as he took Nate Quarry down and then took him out, winning via submission in the opening round.
WATCH ON UFC FIGHT PASS

The third time was the charm for veteran Aaron Riley, as he finally got his first UFC win in three tries with a razor-thin unanimous decision victory over Jorge Gurgel in an exciting lightweight bout.
WATCH ON UFC FIGHT PASS

Up and comer Jeremy Stephens survived some slick submission work by newcomer Rafael Dos Anjos to knock the Brazilian out with a blistering uppercut in the third and final round of their lightweight scrap.
WATCH ON UFC FIGHT PASS 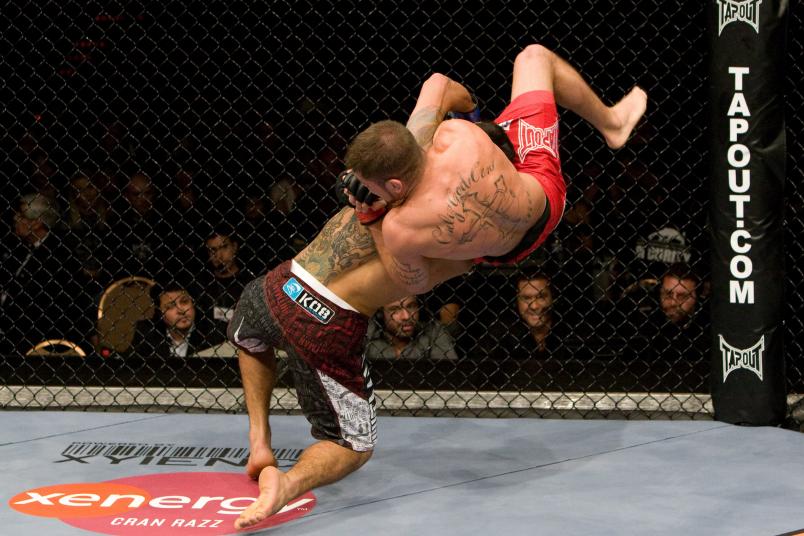 Lightweight Mark Bocek scored the most impressive win of his UFC career, submitting a game Alvin Robinson in the third round.
WATCH ON UFC FIGHT PASS

The Ultimate Fighter season seven’s Matt Brown continued to show improvement in his game, submitting Ryan Thomas in the second round of their welterweight bout.
WATCH ON UFC FIGHT PASS