Flashback to 2015, when BJ Penn initially retired from MMA and was inducted into the UFC Hall of Fame
By Thomas Gerbasi, on Twitter: @TGerbasi • Apr. 20, 2020

No, we didn’t know that when BJ Penn retired from MMA in 2014 and was inducted into the UFC Hall of Fame in 2015 that he would return to fight four more times, but hey, this is combat sports, and the “R” word never sits too well with fighters, especially those who have reached the pinnacle of their respective discipline.

And few hit the top quite like “The Prodigy,” a fighter who captured the imagination of fans from the time he stepped into the Octagon (and MMA) for the first time against Joey Gilbert in 2001. Think about that, Penn debuted in the UFC and fought his entire career (even his bouts outside the Octagon) at the highest level of the sport. It’s why people still talk about his prime years in reverent tones, and why he will always be on my short list of favorite fighters.

In today’s flashback, I give you a few hundred words (okay, 1,143) about Penn just before his UFC Hall of Fame induction in 2015, explaining why he was such an important figure to this sport and to this fan.

I’m a BJ Penn fan. As much as we’re supposed to be objective in this business, from the time I sat at Octagonside for his first fight against Joey Gilbert in 2001 to his final bout against Frankie Edgar in 2014, there was no such thing as objectivity when it came to “The Prodigy.” 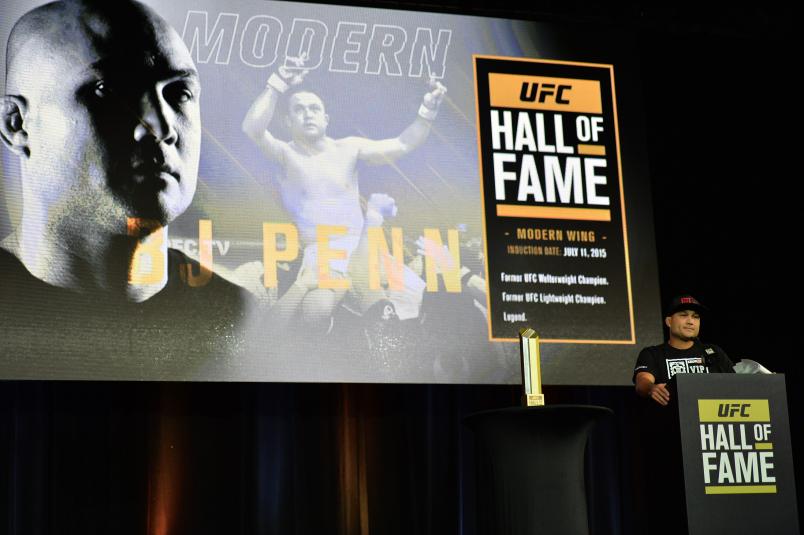 LAS VEGAS, NEVADA - JULY 11: BJ Penn gives his acceptance speech as he is inducted into the UFC Hall of Fame at the UFC Fan Expo in the Sands Expo and Convention Center on July 11, 2015 in Las Vegas Nevada. (Photo by Brandon Magnus/Zuffa LLC/Zuffa LLC via Getty Images)

LAS VEGAS, NEVADA - JULY 11: BJ Penn gives his acceptance speech as he is inducted into the UFC Hall of Fame at the UFC Fan Expo in the Sands Expo and Convention Center on July 11, 2015 in Las Vegas Nevada. (Photo by Brandon Magnus/Zuffa LLC/Zuffa LLC via

And though it would be easy to wax poetic about the Hawaiian icon just before he travels to Las Vegas for his UFC Hall of Fame induction on July 11, the only words really needed to sum up the career of Penn came from the man himself. When he told them to me, I knew instantly that this was someone who didn’t just know why his legion of fans loved him; he knew who he was.

That connection between fighter and fan is rare, but Penn had it. That alone might warrant him a place on fighting’s Mount Rushmore of greats, but his body of work was what really put it over the top. One of only two men in UFC history (at the time, along with Randy Couture) to win titles in two weight divisions, Penn was a champion at welterweight and lightweight, but it was at 155 where he made his mark as one of the best to ever put on the gloves. That was never enough for Penn though, and part of his legend is that he fought a 225-pound Lyoto Machida in 2005, a 185-pound Renzo Gracie that same year, and a 145-pound Edgar in his final bout. Add in his trilogy with Matt Hughes, his two-fight series with Georges St-Pierre and Jens Pulver, and his ability to captivate and infuriate, sometimes within the same sentence, and you have a fighter the likes of which we probably won’t see again.

Yet when asked about his appeal after all these years, the 36-year-old whittles it down to the most basic of principles.

“I think it was the idea of the ordinary guy doing extraordinary things,” he said. “I didn’t have that superhuman look, sometimes I was out of shape, sometimes I was fat, and with that and some of the other stuff as well, the fans related to me and they could put themselves in my shoes.” 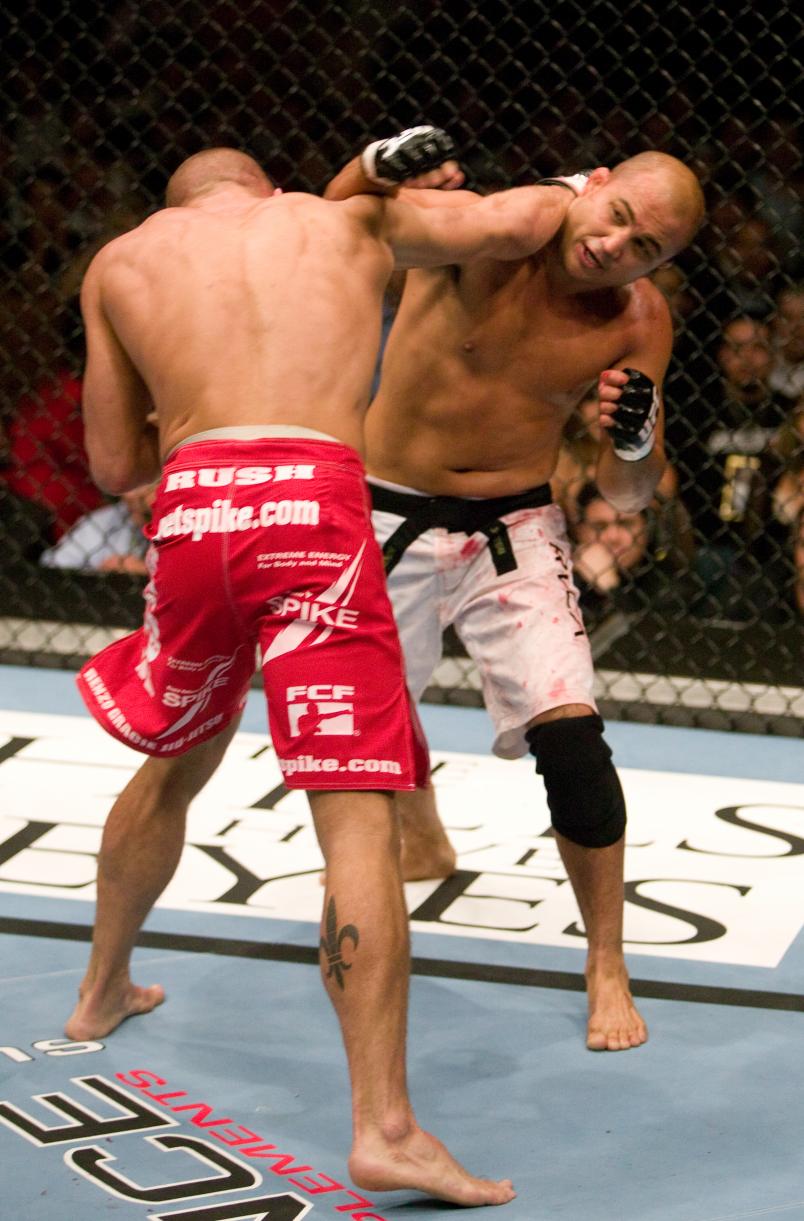 BJ Penn wasn’t ordinary. He was something special, a fighter who could do it all, and one with flexibility on the mat that had rarely, if ever, been seen before. You don’t become the first non-Brazilian to win the black belt division of the Jiu-Jitsu World Championships – like he did in 2000 – without being a unique talent. How unique? By 2001 he was making his pro MMA debut – in the UFC.

“You know why that’s probably my greatest accomplishment, because that’s why Dana White let me in the UFC,” Penn said of winning the BJJ Worlds. “If I did not have that, Dana would not have let me in back in 2001.”

Once Penn was in, he made an immediate impact, winning three straight by knockout over Gilbert, Din Thomas and Caol Uno before an upset loss to Jens Pulver in their classic 2002 lightweight title fight. Penn would eventually get his championship belt, upsetting Matt Hughes for the welterweight crown in 2004, kicking off a unique trilogy in which the two were heated rivals but later friends. And on July 11, Hughes will be the one inducting Penn into the UFC Hall of Fame.

“Going back to important moments, there are two things that I really remember,” Penn said. “Number one, and I’ve got to thank Dana for this one, is getting me into the UFC and getting me that first fight against Joey Gilbert. That was just the biggest thing in the world to me, a 22-year-old kid getting into the UFC and getting to fight Joey Gilbert. That was very big and one thing I’ll never forget. Then there was everything with Matt Hughes. Even though beating Matt Hughes gave me the bragging rights to talk however I wanted to talk, he was always the guy I looked up to. Even though he was a wrestler and I was a jiu-jitsu guy, I always knew he was the top dog at the time. I was just a confident guy that ended up winning that fight, but it still never dropped him in my eyes.” 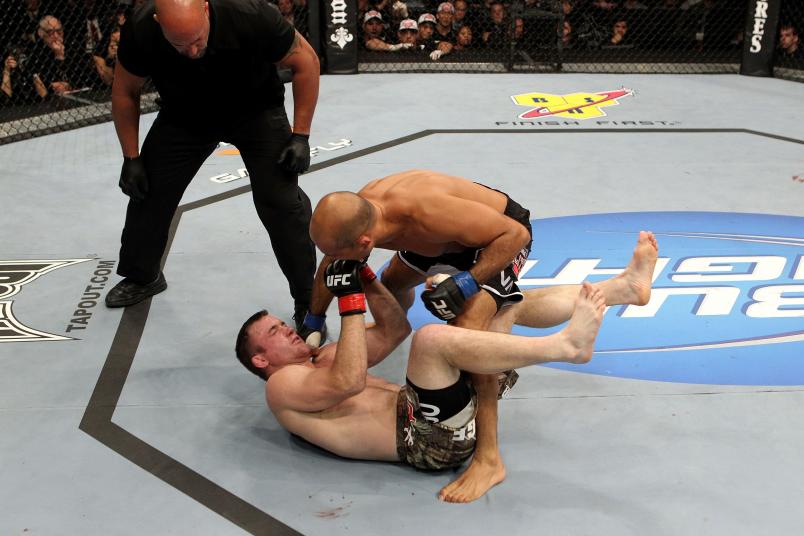 AUBURN HILLAS, MI - NOVEMBER 20: BJ Penn (standing) lands a punch to the face against Matt Hughes (red gloves) during their Welterweight bout part of UFC 123 at the Palace of Auburn Hills on November 20, 2010 in Auburn Hills, Michigan. (Photo by Josh Hedges/Zuffa LLC/Zuffa LLC via Getty Images)

AUBURN HILLAS, MI - NOVEMBER 20: BJ Penn (standing) lands a punch to the face against Matt Hughes (red gloves) during their Welterweight bout part of UFC 123 at the Palace of Auburn Hills on November 20, 2010 in Auburn Hills, Michigan. (Photo by Josh Hedg

That was always the thing about Penn. Like he said, he could disappoint you, make you happy, or make you cry, but in the end, you couldn’t help but like him. He was a fighter’s fighter and he was a fan’s fighter, with all the loyalty that comes along with that. And even though the announcement that he was going into the Hall of Fame was an expected one, to hear it made official still made Penn smile.

“Me and Dana have had a lot of talks about this toward the end of my career, so when I finally got the phone call from him, I was very excited,” Penn said. “He didn’t tell me about the promo (video with the official announcement) because I’ve got a big mouth and I tell everybody everything (Laughs), so I was talking to somebody and they’re like, ‘Hey man, you’re on TV.’ So that was cool. Everybody was excited. I’m such a controversial athlete with so many critics in different things, but after getting inducted, everybody was so nice and so positive because they knew that even if they weren’t a fan of BJ, they knew he was supposed to go into the Hall of Fame. It was a very nice way to end everything.”

There are people who aren’t BJ Penn fans?

“I can’t believe that there’s somebody who’s not a BJ Penn fight, right?”

It is hard to picture, but suffice to say that the people who pack the UFC Fan Expo on July 11 will all be cheering for “The Prodigy,” who says once and for all that he’s done fighting, but that he’ll always be a fighter.

“I’ve been saying how I put it behind me and how it’s not an easy thing with the competitive spirit of a fighter and an athlete, and not having another chance to prove again how you’re the greatest at what you do,” he said. “So I’m proud to say I can put that stuff behind me, because it’s not easy. But now that I’m thinking about it, I’m starting to picture myself at the Expo, doing the Hall of Fame thing, and I’m sure I’m gonna feel the excitement of the place.”