Flash is Fundamental for Daron Cruickshank

"I always pride myself on being an entertainer and not only just a fighter." - Daron Cruickshank 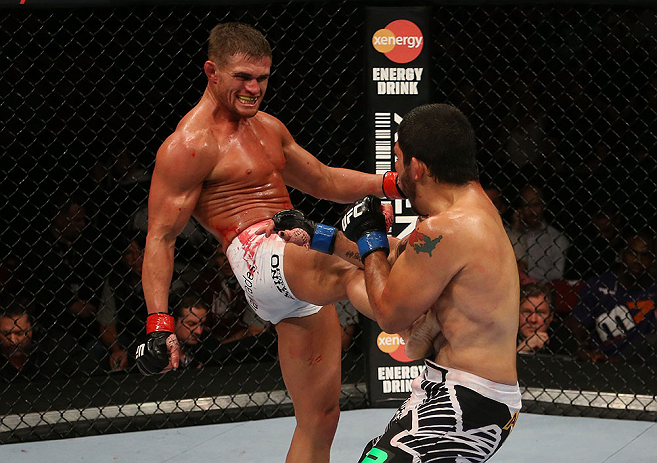 It’s easy to get impressed by the flashy techniques delivered by UFC lightweight Daron Cruickshank in the Octagon, especially since a couple of them have resulted in spectacular knockout wins over Henry Martinez and Mike Rio.

Unfortunately, a segment of the MMA community believes that flash for flash’s sake is a bad thing, that it hides a lack of fundamentals key to success in this sport. But that’s the thing – with Cruickshank, those moves deemed unorthodox are his fundamentals, making him one of the more dangerous and unpredictable 155-pounders in the game.

“The whole game is constantly changing, and what me, (UFC lightweight champion) Anthony (Pettis), and other fighters in the pure martial art forms are doing is all basic technique,” said Cruickshank. “That’s just like a jab and a cross for boxing. As a kid, you do Taekwondo, and if you grow up in that area, you’re going to throw a million spinning side kicks, spinning hook kicks, crescent kicks, axe kicks. That’s all basic stuff.”

Easy for him to say, given what looks to be moves with a high degree of difficulty,  but when you’re a black belt in Taekwondo whose parents also hold the same rank, it may just be something in the Cruickshank blood. Yet despite this, he insists that choosing to fight was his decision, not theirs.

“They never forced me to,” he said. “I was never forced to go to practice and I really only picked it up when I wanted to start fighting. And that’s good because that means I’m not going get burned out. It’s something I want to do, and I don’t do anything I don’t want to do. And if you knew me, if I suck at something, I don’t do it.”

Cruickshank laughs, and it’s clear that fighting is something he’s pretty damn good at. 14-4 as a pro, he learned his MMA craft on the local circuit before picking up a spot on season 15 of The Ultimate Fighter. Since then, he’s gone 4-2 in the Octagon heading to what is likely the biggest fight of his career, a Saturday meeting with Erik Koch in Cincinnati.

“This is a big, big fight for me as far as opportunity, and opportunity after,” he said. “Even if I go out there and put on a battle and I’m impressive but I lose, that will still jump me to the next level. We’re both up and coming and he (Koch) had a great career at 145 and was ranked pretty high, and now he’s moved up in weight class and I’m going to be there to let him know that this isn’t an easier weight class. This is going to be tougher and I’m going to give him the fight of his life.”

On paper, this is a Fight of the Night waiting to happen, but it’s also a situation where Cruickshank is going to have his striking game analyzed from top to bottom by one of the best in Koch’s coach Duke Roufus. That could be intimidating to any fighter, but not to Cruickshank.

“I think it’s really cool,” he said. “It’s the next hurdle for me in my career. I gotta go through Erik Koch, and in return I gotta go through Duke Roufus’ master coaching. It’s a great opportunity for me to show who I am and how I’m going to change from fight to fight. And it’s two totally different things watching somebody on video, and being in front of them.”

That’s a lesson the “Detroit Superstar” picked up a while back, and he hasn’t forgotten it.

“I don’t try to put anybody on a pedestal,” he said. “I’ve done that in the past and I’ve learned from my mistakes. I basically just worry about myself and I don’t watch hours and hours of tape. It’s two totally different things, being in front of somebody and watching their tape.”

If you’ve seen his kicks take out Martinez and Rio, you don’t want to be standing in front of Daron Cruickshank. And this year, he’s looking to make some more clips for his highlight reel.

“I’d like to go 4-0 this year, and I always try to be impressive, so I’m trying to pay off all my student loans,” he laughs. “I’m trying to climb that ladder, that way I can make big bucks and do it impressively. I always pride myself on being an entertainer and not only just a fighter. There’s times when you’ve gotta go and take people down and lay on ‘em, just to win a match, but I try to do that the least amount as possible.”