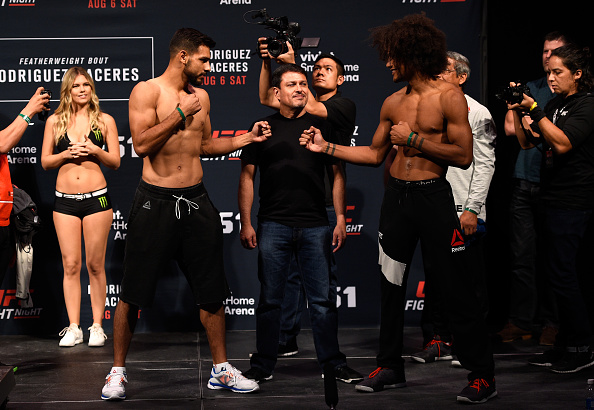 Expect the Unexpected: Yair Rodriguez is the first featherweight fighter since division champ Conor McGregor to win his first four UFC fights. Not bad for a 23-year-old. He’s ranked No. 13 and is featured on the main event with Alex Caceres in a matchup between two of the UFC’s most unorthodox fighters. What makes this bout so intriguing is the creativeness - and at times recklessness - both fighters display every time they set foot inside the Octagon. A relentless pace is the norm for these versatile fighters. Aside from that, having any expectation on how the fight will go is a losing battle.
RELATED CONTENT: Open Workout highlights | Preview Rodriguez vs Caceres | Matchup: Bermudez vs Jason | How to Watch Fight Night Salt Lake City

Stay Grounded: When it comes to the art of takedowns and takedown defense, no UFC featherweight fighter is better than No. 8 Dennis Bermudez. The New York native is at his best on the ground and his 33 takedowns landed in UFC featherweight competition are the most in division history. Trying to beat him at his own game has proved extremely difficult for opponents with Bermudez successfully defending 91.4 percent of all takedown attempts, also the highest rate in featherweight history. He’ll take on Rony Jason who is not only fighting for the first time in 434 days but also fighting outside of his home country of Brazil for the first time in his UFC career.

Welcome to The Show: Saturday is a night of firsts as the UFC debuts in Utah with five fighters making their first UFC appearance. Three of these fighters - Chase Sherman, Justin Ledet and Joe Gigliotti, have won all of their professional MMA fights by one way: stoppage. Sherman’s nine wins have come by first-round knockout and he’ll take on unbeaten Ledet in a heavyweight showdown. Gigliotti makes his debut at 22 years old against Trevor Smith who is anything but new to MMA as a seven-year veteran. He has nine wins by submission and nine first-round finishes making this middleweight fight a good test for Gigliotti. Also debuting are Jason Novelli and Danielle Taylor, who boast a combined record of 18-2.

Top 15 Veterans Clash: Two of the most-experienced and talented featherweights face off when No. 5 Cub Swanson battles No. 14 Tatsuya Kawajiri. Combined, the two men have fought in a staggering 75 bouts and have 28 years of experience. What separates these men, though, is their style of fighting with Kawajiri being a formidable wrestler and Swanson a hard-hitting, striking specialist. Kawajiri has a 50 percent takedown accuracy rate in his last 27 fights and he will look to control this fight from the mat. But if Swanson is able to defend the takedowns, he can pick apart the Japanese fighter with his dangerous striking and continue his UFC comeback.

Here to Stay: Ever since getting cut by the UFC in 2014, Chris Camozzi has been on a tear winning three of his last four fights in dominant fashion. He’s now on the cusp of breaking into the middleweight Top 15 rankings and has a chance to do so when he faces No. 12 Thales Leites. Camozzi’s forte is leg kicks and his 182 kicks landed are the second most in UFC middleweight history behind division champ Michael Bisping.