Five Rounds or Bust for "The Carpenter" 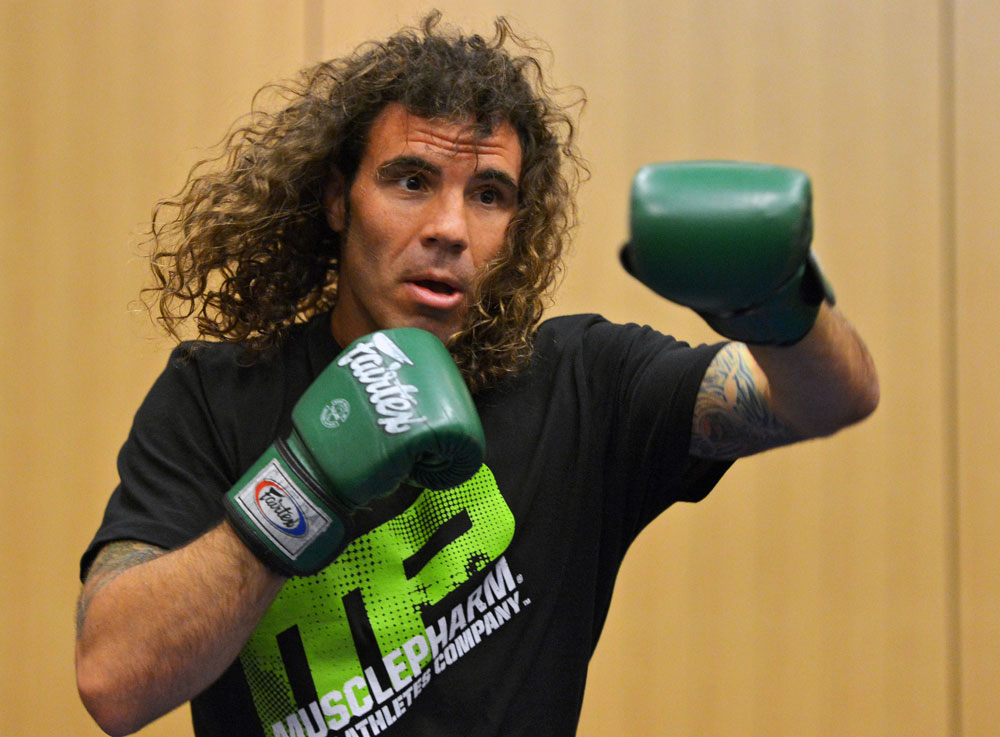 The phrase “you learn more from a loss than a win” is a platitude to a cynical some, but it’s a an age-old truism for those who strive for greatness.

The UFC’s former journeyman lightweight turned top contender Clay Guida knows that much can be learned from his unanimous decision loss to Benson Henderson at UFC on FOX last November. For one, Guida battled for a full 15 minutes to a Fight of the Night bonus with Henderson, who was one Octagon appearance away from declaring himself the number one ranked 155-pounder in the world. As Guida looks to forever etch his name amongst the division’s upper-echelon against Gray Maynard at UFC on FX 4 on Friday night, Guida will draw from his wealth of in-cage experience to make him an even stronger and better prepared fighter than before.

“I think if you don't know how to take positives from a loss, then you're not a competitor and you don't know how to handle a loss,” explains Guida. “Getting better in scrambles, better positioning in the wrestling, better clinch work, finishing my takedowns. Obviously, we pushed the pace until the last second, until the final bell and that's what we expected and I expect nothing less of myself. I'm going to come back to the UFC a better fighter.”

Plus, no one looks more formidable in a losing effort than “The Carpenter.” In arguably the most talent rich division in MMA, Guida has an impressive list of 29 career victories, including the four fight winning streak - Shannon Gugerty, Rafael dos Anjos, Takanori Gomi, and Anthony Pettis - which led into the Henderson bout. But what is truly mind-bending about Guida is that if an opponent is going to defeat him, they’ll need to give probably the best performance they could possibly give that night. Five of Guida’s six losses in the UFC won Fight of the Night and two won Fight of the Year, which means he really does not go gentle into that good night.

Although the match with Henderson did not go how he wanted, Guida has lost little ground in the weight class’ standings by losing to the present champion. On top of that, Guida’s next opponent is not a step down in competition in the slightest, and a win should put him within a hair’s breadth from the belt like last year’s bout with Henderson would have. Tomorrow night, in an event that should literally make cagefighting fans salivate with expectations, Guida will fight “The Bully” Maynard.

“We actually asked for this fight,” tells Guida. “We wanted to set ourselves up with the toughest competitor in the division who had lost to the next toughest competitor in the division, who was Frankie Edgar, who had the belt at the time. We had just lost to the eventual champion Ben Henderson, so there was no sense to us in entertaining lesser fights. We know we're competitive with all these guys. It's a tight race. I still believe I'm right up there with Frankie, Ben Henderson, and Gray. I think it's the four of us and everyone else. We want to set ourselves up to getting right back into title contention and I think finishing Gray Maynard gets us back there and makes us the number one contender. He had one of the most memorable trilogies in MMA in the lightweight division. He was the only guy who had beaten Frankie (before Henderson) and he eventually lost to him, but up until that point he was number two in the world. He's a top dog. On June 22nd, it's going to tell a lot when I run away from the pack with a big win over Gray.”

The 30-year old Illinois native is known for his “can do” attitude and relaxed “The Dude” like philosophy to life outside of the Octagon, but the veteran of nearly 40 pro MMA matches is simply not messing around inside it. Guida raised his stock in the division with his four straight wins, which featured two Submission of the Night bonuses, and has no plans facing opponents that are not the best of the best, which “The Bully” is. At 33 years old, Maynard was undefeated and on an eight fight winning streak against all highly regarded adversaries in the UFC until the draw followed by a loss to Edgar in 2011. Expectations should be these two meeting head-to-head in the center of the Octagon like the battering rams they are.

“I think this is a great matchup for the both of us,” claims Guida. “You have a big strong wrestler in Gray Maynard who has a lot of accolades. He's the most decorated wrestler that I have faced to date – three-time All-American, Big 10 wrestler. He's big and cuts a lot of weight. He throws heavy punches, has very good boxing, and we've seen him drop guys in his last few fights. He has vicious ground and pound and very good takedowns. We're going to try to take that and wear him down over the five rounds. I think that's huge for us. I think it's going to be one of those fights where anything can happen. Two good wrestlers who are good at scrambling and are always conditioned. I'm going to take him deep into the fourth and fifth rounds and see what he's made of.”

Outside of the Edgar/Henderson rematch for the belt, this is easily the most meaningful tangle the division has to offer. Maynard vs. Guida feels like a title fight even if it isn’t and, thankfully, there is some justice in the fight game because the UFC created the five round non-title main event last year. The additional time has always been seen as a theoretical boon for cardio monsters like Guida, who use their relentless intensity and never-ending gas tank to break their opponents. It’s been a little while since “The Carpenter” has been in those championship rounds, but Guida has felt what it’s like to duel for 25 minutes in the Strikeforce cage when he won the lightweight title against Josh Thomson and lost it to current belt owner Gilbert Melendez in 2006.

“I'm a completely different fighter than I was then,” affirms Guida of his Strikeforce title winning and defending appearances. “I have more tools basically. I have better wrestling, better takedowns, better ground and pound, my hands have more power in them, and I'm more diverse on my feet. I'm not your typical wrestler just going for takedowns like I did against Josh and Gilbert. In the same sense, I'm still the same hard-nosed fighter. What you see is what you get. Nothing's pretty. I still try to punish my opponent and try to finish fights at all cost. I tried to finish Josh Thomson every chance I had. I went for submissions, I tried ground and pound. I had a choke in real deep against Gilbert in the first or second round and tried to finish him then, but came up short. They called that a split decision, but I don't think it was that close. He beat me up for four out of the five rounds. Gray Maynard has more experience at five rounds as of late, but I know this is what I was built for. Conditioning is my bread and butter and this is a long time coming. I haven't had a belt in six years and I miss it. I think this is going to be a nice warmup for what hopefully is to come in the future, and that's a title shot.”

In preparation for Maynard, Guida is making the familiar drive from “The Prairie State” to the literal hot bed of MMA coaching and fighting talent in Albuquerque, New Mexico. For roughly three years, he has been sharpening his tools under the close supervision of striking coach Mike Winkeljohn and MMA guru Greg Jackson, who Guida compares to football coaching greats Vince Lombardi and Bill Belichick. In charge of keeping Guida’s expected strength & conditioning at its insane level are the fine kettlebell instructors at FireBellz like Zar Horton and Jess Hoffman.

As far as training partners at Jackson’s gym, it’s almost throw a dart and hit a champion, would-be champion, or future champion. The list of wildly talented fighters on this particular team appears to never end, with extreme notables like UFC light heavyweight champion Jon Jones, interim UFC welterweight champion Carlos Condit, TUF 14 winners John Dodson and Diego Brandao, Donald Cerrone, Brian Stann, Cub Swanson, Travis Browne, and on and on and on. If there is a recipe for success, then Winkeljohn and Jackson were the ones that unearthed it, and it’s rubbed off on every member of their mini-army of past and current champions and stars in combat sports.

“Being around success spreads like wildfire,” states Guida. “It sounds cliché, but a positive attitude is contagious. I want to be around people who want to win and have a positive mindset and are out to settle for nothing less than their absolute best. Even in defeat, I say if you haven't lost then you probably haven't tried. People who are not willing to put themselves out there haven't felt defeat, but probably haven't done anything with their lives. I'm out here fighting tooth and nail against some of the greatest welterweights, lightweights, featherweights in the world and it's only going to better all of us. It's very humbling to be out here and we're a big family.”

Speaking of family, it is his older brother and fellow MMA fighter, Jason Guida, who gives Clay his final bit of readying before stepping into the Octagon: a few hard slaps to the face. “I get hit hard in the fight and I get hit even harder by my brother before it and that's just the warmup,” laughs Guida. Besides Guida’s trademark swirling shoulder length hair, belching in between rounds, and carousel of hard rock entrance music, the smacks from the man who initially got him into this sport might be the wildest recurring aspect to Guida’s fights. As jarring as these open-palmed strikes are for an average three rounder, hopefully Jason doesn’t ramp them up too much and knock Clay out before he steps into the cage for this five round main event.

Tomorrow night in Atlantic City, “The Carpenter” is aiming to redeem himself in his title shot campaign with a battle on the boardwalk against Maynard. “Even after a loss against who is now the belt holder in the lightweight division, I wouldn't say I was down and I definitely wouldn't say I was out,” declares Guida, who is hunting for a headlining finish over Maynard with only that gold on the horizon. “I come back even stronger after a defeat than a victory. I'm just excited for the challenge of facing the toughest wrestler I have had to face and prove something to myself and something to the fans that I'm going to be right back in there. I'm coming in guns blazing for five rounds and I want to set the tone for future main events and future title fights.”