Curtis Blaydes is OK with that. Viewing a loss as an opportunity to improve and mature is a mindset that he has acquired over his UFC career.

And he expects to display that development on Saturday when he fights rising heavyweight Justin Willis.

“I’m just happy to be here,” Blaydes said.  “I think the number one spot where I’ve improved and people haven’t seen or I haven’t had to use it is my top game in jiu jitsu. My positions, my positional striking and my balance have gotten much better. I’m just excited to fight.”

In order for Blaydes to execute that ground game he will need to get Willis to the canvas, something that none of his opponents have been able to do so far. Blaydes only needs two more takedowns to surpass former champion Cain Velasquez for the most takedowns by a heavyweight in UFC history and believes that he secure that record against Willis.

“That is about to change,” Blaydes said in response to the fact that Willis’ has never been taken down in the UFC. “I’m about to break the record. I’m one behind Velasquez right now and I’m going to get the record. It means a lot to me being a wrestler and it’s an opportunity to establish myself as the best heavyweight wrestler. That’s just something to tip your hat to, I like that.”

Willis currently trains with Daniel Cormier and Velasquez at and believes that working with top tier wrestlers have prepared him for Blaydes. While it definitely can help, “Razor” doesn’t quite think it will help him as much as he hopes so.

UFC: Your fight Beijing didn’t go your way, but what you were most disappointed with was that you weren’t able to showcase how you’ve improved since UFC 225. Can you talk a little bit about that?

CB: It means I better not waste it this time. You don’t know how many opportunities the UFC is going to give you to be a headliner or in the co-main event. I definitely want to give the people a show and remind them that I’m supposed to be here.

UFC: What are some of the main advantages that you see in this fight with Willis?

CB: I think I have the advantage in all of the boxes. Athleticism, length, endurance and chin. I’ve been hit by obviously Ngannou, it wasn’t a chin shot in the last fight though it was a back of the head shot. But I’ve eaten his on the chin. I actually ate one of Mark Hunt’s right down the pipe whereas Justin Willis kind of jabbed and ran. He hasn’t had his jaw tested. I’ve eaten knees from Alistair (Overeem), probably the strongest knees on this Earth. So I believe in my jaw.

UFC: What’s it been like to study Justin Willis?

CB: There’s not much to study. He’s your classic southpaw, doesn’t have the best footwork and he kind of plods. There’s nothing really special about him, I’m not going to say he’s average because he’s in the UFC so every heavyweight in the UFC is special, but amongst the UFC heavyweights he isn’t special. 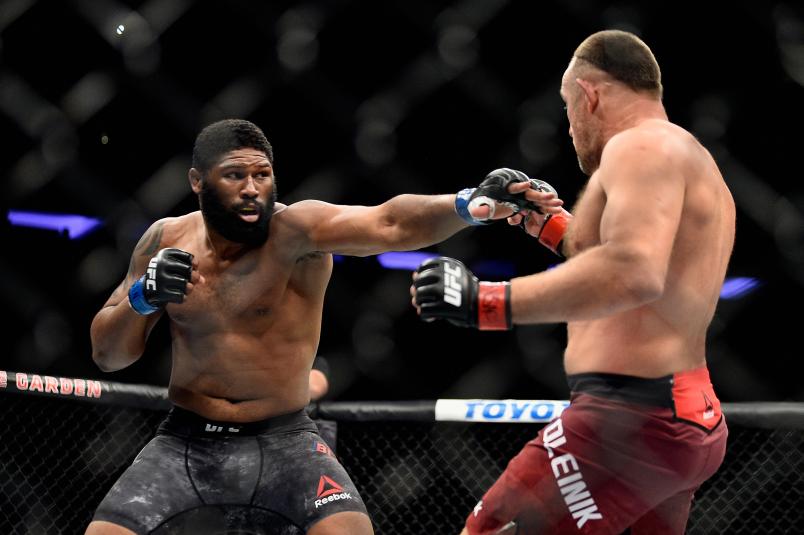 Curtis Blaydes punches Aleksei Oleinik in their heavyweight bout during the UFC 217 event at Madison Square Garden on November 4, 2017 in New York City.

UFC: Willis is on a nice little winning streak. What would a win over a guy like that say about where you are at in your UFC career?

CB: It would mean that I have finally transitioned from prospect into contender, even after the last fight I don’t think UFC is going to hold that against me because Ngannou has been dropping everybody. I think they see me as a legitimate contender and I’m going to try to get a bounce back win.

UFC: What are the keys to getting that bounce back victory?

CB: I think the keys to my victory will be constant pressure like I don’t want to give him any chance to relax and pressure me. That’s when I think he is at his best, when he is walking forward. Another key is that he is a southpaw and I’m orthodox so I have to keep on fighting on the outside foot and keeping that leverage, that angle. I have to constantly be doing it. I don’t want to get caught square, that’s when he lands that heavy left. Third thing is to believe in my conditioning. I can redline for way longer than he can. I train and I live at 5,800 ft above elevation, I don’t know what the elevation is here but it isn’t that. I’m going to believe in my conditioning.

The main card for UFC Fight Night – Thompson vs. Pettis starts at 8pm/5pm ETPT on ESPN+. Make sure you tune in to find out if Thompson can spoil Pettis’ welterweight debut.