'Violent Bob Ross' Talks About His Featherweight Debut and His Surreal Year
By Gavin Porter • Mar. 20, 2019

He let it go to the distance.

“That was the first time in my career that one of my fights went the distance,” Pena said. “And I don’t plan on letting that happen this Saturday.”

Since his fight against Trizano, “Violent Bob Ross” has been focused on fine tuning the little things. Using his fight camp at AKA to sharpen his technique and get his mind right.

“I think before going to AKA I hate to say it, I got a little like not lazy but lackadaisical in my intensity,” Pena said. “I train hard but I wasn’t going for the kill like I should. I think over the course of this last camp I have kind of nipped that in the bud and you’re going to see a newly invigorated “Violent Bob Ross” out there.”

Pena’s next opponent comes in the form of Fortis MMA product Steven Peterson at UFC Nashville. He is also dropping down from lightweight to featherweight for the bout. Pena is very excited to be fighting back in The Volunteer State.

“Man I am super excited to be fighting back in Tennessee,” Pena said. “A lot of people don’t know this but I pretty much cut my teeth entirely during my amateur career here in Tennessee. I’ve had just an insane outpour of support from the local community so honestly it just feels like being back home. I can’t lie, this is like coming full circle for me.”

UFC: So you’re making the drop down to featherweight. Why did you decide to make the switch now?

Luis Pena: One of the main reasons is so easy for me to make 155lbs. To make 155lb I don’t diet at all I just workout, train really hard and just show up. It’s just really easy for me to make. So even before fight week my coaches were asking how much I was weighing. Then they were like dude if you’re weighing this light we have to go down to 145lb after this fight because guys are cutting from 190lb or 180lbs to make 155lb. I was cutting from like 165lb so I knew my coaches were definitely right.

UFC: What do you think it says about you that the match-makers were willing to give you a fight against a tough opponent like Steven Peterson?

LP: I think it says a lot. I think it says that Sean Shelby and everyone there put a lot of stock in me. And I just want to go in there and prove them right. I’m honored to be fighting a guy like Steven. He is a former LFA champion, he’s super experienced and he’s a super tough guy. It’s going to be a tough fight but I’m ready for it. While I do only have a handful of pro fights compared to him, I’ve fought at this point over 40 times across MMA, kickboxing and boxing as an amateur and as a professional. As much as he does have experience on me when it comes to straight MMA, I don’t necessarily see it as him having a ton of experience over me.

UFC: Talk to me about your opponent. What are some things you’ve seen from him?

LP: The biggest thing about Steven is that he is super tough. You’re going to have to throw the kitchen sink at him to put him away. He likes to come forward, he likes to put pressure on guys, brawl, and get them up against the cage and beat them up. The thing is I think I’m really good at like turning guys and getting off the cage and really capitalizing on counterstriking against overly aggressive guys. So I think that will play well but at the same time I trust my jiu jitsu and I trust my wrestling so if I have to I will take him down and try to strangle him.

UFC: What are some of your keys to victory in this fight?

LP: I think the keys to victory for me in this fight are to stay at range, keep the volume up and just work. I want to kind of show my whole repertoire in this fight. I want to show people that if he puts me up against the cage, I’m going to have the advantage there. If it stays striking I’m going to continue to keep the advantage and if it hits the ground, that’s where you don’t want to go with me because I’m going to finish you. I just want to be able to show my full skill-set and man, I don’t know, I just feel really confident and ready to go. 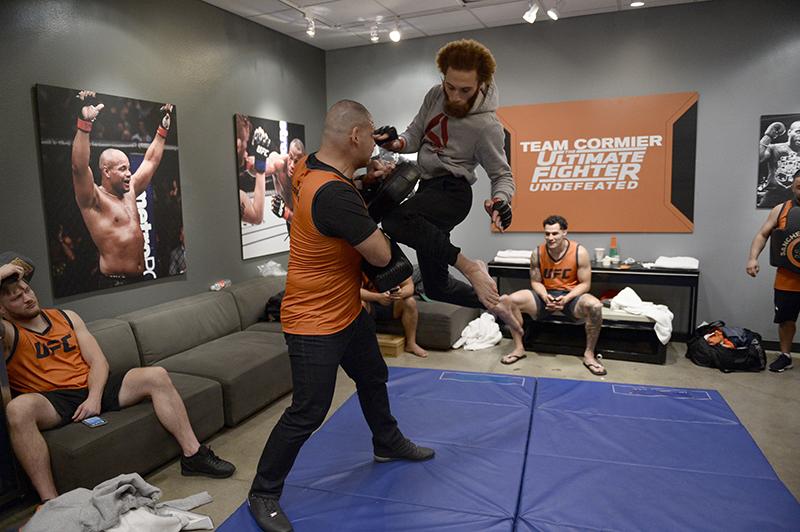 UFC: Can you just talk about how much your life has changed over the last year and what that has been like for you?

LP: It is surreal. I wake up almost every day and I’m like, ‘How did this happen to me?’” Almost two years ago exactly I was getting ready to fight in Elizabeth, Tennessee for like my third pro fight. And now two years later, I’m about to do my sixth pro fight and third technically in the UFC against a dude that’s a former LFA champion. It’s crazy. I never thought this would be my life, this early in my career. The fans are the biggest thing it’s crazy to me when guys are like, ‘I want to get a picture with you’ or ‘I want your autograph’. I never thought I’d be that guy and to go from out of nowhere being some guy to not necessarily being a UFC star, but just a guy that’s known in the UFC, it’s been pretty awesome I can’t lie. I enjoy it.

The main card for UFC Fight Night – Thompson vs. Pettis starts at 8pm/5pm ETPT on ESPN+. Tune in to see if “Violent Bob Ross” can get back into the win column against Peterson.