Hermansson talked with UFC.com about his life during quarantine and how important Saturday’s matchup with Gastelum is.
By Jon Gagnon • Jul. 17, 2020

The 10 months since Jack Hermansson’s last UFC appearance has been the longest layoff of his UFC career.

The pandemic has certainly played in a part in the delay of Hermansson’s return. He was originally supposed to face former middleweight champ Chris Weidman a couple months ago. But when that fight didn’t work out as planned, Hermansson earned – in his opinion - a better opportunity, when he faces No. 7-ranked Kelvin Gastelum in the co-main event of Fight Island 2.

“I’m super happy just to get an opportunity to fight right now,” Hermansson said. “So much of the world is on hold and I’m happy to get in there and not have to wait any longer to fight.”

Hermansson is laser-focused ahead of Saturday’s tilt. To combat the unusual circumstances surrounding Fight Island, he began adjusting to the time zone difference two weeks ago when he was still at home. It’s the type of dedication that a future champion must apply. And after all, Hermansson isn’t new to the pressure of earning a title shot. Before Hermansson’s defeat to Jared Cannonier last September, he had ripped off four consecutive wins and was within reach of the belt.

Hermansson talked with UFC.com about his life during quarantine and how important Saturday’s matchup with Gastelum is.

UFC: It’s been a while since we’ve last seen you. What have you been working on in your time off?

JH: I’ve been working on my whole game. I focused more on my strength training, so I gained a little bit of weight and after that I worked on my punching power. In February, we were starting to talk about fighting again.

UFC: How important is it for you to get back in the win column, especially being in such a stacked division?

JH: Extremely important. That’s what it’s about for me. I have my eyes on the title and that’s my goal. Nothing else matters. A win will put me on the right track towards the title.

UFC: You were originally supposed to face Chris Weidman, but your opponent was switched to Gastelum. Is this a better matchup for you?

JH: I’m happy about the switch from Weidman to Kelvin. Kelvin is right next to me in the rankings so with a win I don’t see why I wouldn’t get a fight against someone in the Top 5. 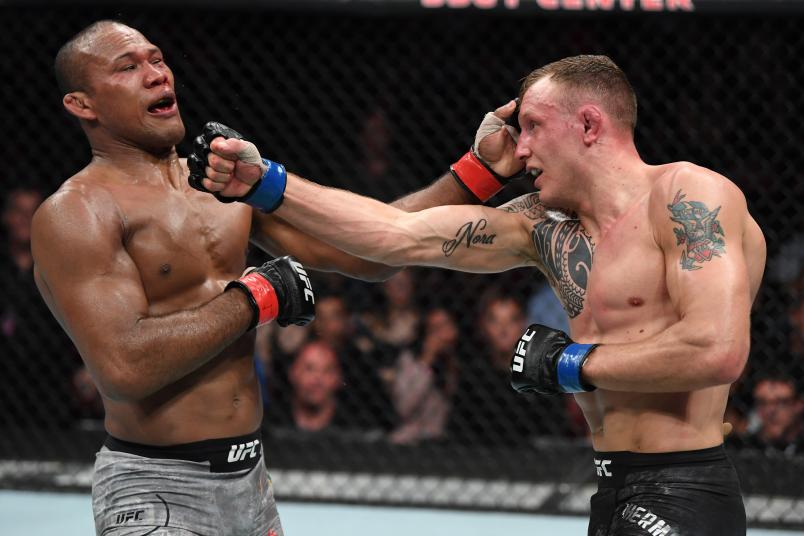 SUNRISE, FL - APRIL 27: (R-L) Jack Hermansson of Sweden punches Jacare Souza of Brazil in their middleweight bout during the UFC Fight Night event at BB&T Center on April 27, 2019 in Sunrise, Florida. (Photo by Jeff Bottari/Zuffa LLC/Zuffa LLC via Getty I

UFC: Gastelum is coming off back-to-back losses. Are you expecting him to be extra motivated for this fight?

JH: I’m expecting the best Kelvin there is and a motivated Kelvin. He had a great performance against (champion) Israel Adesanya, even though he lost. He basically gave Adesanya the hardest fight so far. That’s the Kelvin I’m expecting.

UFC: Do you think this is the hardest fight you’ve ever prepared for? And what your advantages in the matchup?

JH: It’s hard to say because of styles. All the small decisions you make in the cage will make things work for or against you. So it’s hard to say, but he’s definitely one of the hardest opponents I’ve prepared for. I think I have a more all-around game. A lot of my tools are sharper, and I think I have a conditioning advantage against everybody.