It's nearly impossible to dislike Brad Katona. The featherweight winner of The Ultimate Fighter: Undefeated is as thoughtful, good-humored and conscientious outside the Octagon as he is dangerous inside of it.

Still marveling at his own rapid ascent in the sport ("Every time someone wants a picture, I'm more excited than they are!") Katona will use his UFC 231 prelim bout against Matthew Lopez to return to his natural bantamweight style.

An accomplished engineering student, Katona trains in the hallowed halls of SBG Ireland with John Kavanagh, but still proudly waves the flag of his Canadian homeland. We sat down with him in Toronto to talk about the whirlwind of the last few months. 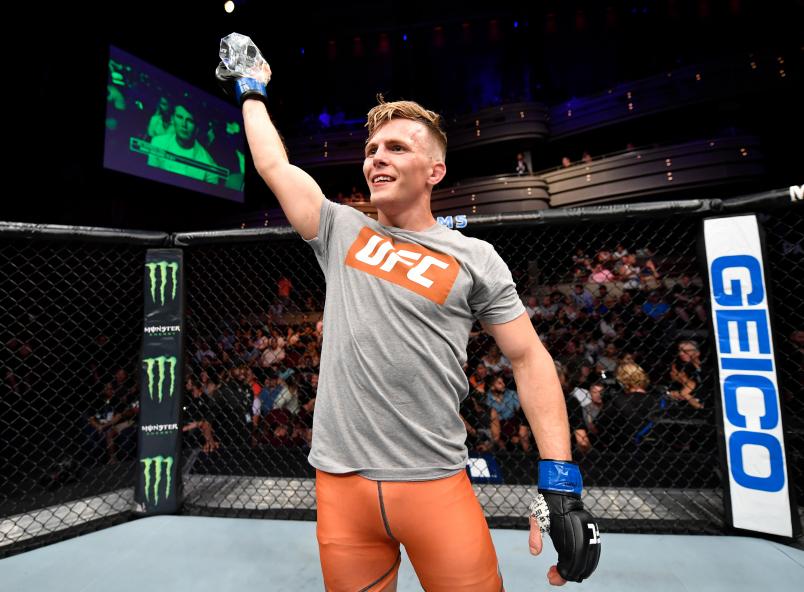 UFC: Is your journey into the UFC unfolding the way you envisioned it would?

BK: I have to say, it kind of is. I always pictured myself since I started watching The Ultimate Fighter at age 13 or 14 as going to the UFC. I was a big fan of Joe Stevenson so I always thought it was going to be through The Ultimate Fighter. I saw him get his trophy and I was like “I want that trophy!” And now I do, which is amazing. When I moved to Ireland, I didn’t think I would be in the UFC this quickly. The plan was to build up in local rankings, get some experience fighting internationally and make that jump. But fortunately The Ultimate Fighter came up. I barely made it, but I made it in there. Taking that risk and going definitely set me on a pretty crazy path.

UFC: Even though you live and train in Ireland, you’re back here fighting in your home country of Canada. Do you ever think about representing an entire country the way Mark Hunt represents Australia or Conor McGregor represents Ireland?

BK: Yeah. You know, there’s only so many of us Canadians in the UFC right now. For awhile, we were kind of ahead of the curve, you could argue. Now there’s less of us. For whatever reason, the Canadian MMA scene is having difficulty building new and great fighters. Having a champion like Georges St-Pierre definitely helped fuel that [in the past], there’s still many great Canadian fighters. But compared to how other countries have grown, we haven’t grown at the same speed. So I definitely feel like I’m representing Canada. I’m very proud to be representing Canada.

UFC: Do you still enjoy the sport as a fan? Do you watch fights when you’re not fighting?

BK: I absolutely still enjoy the sport as a fan. I watch pretty well every UFC [event]. Being in Ireland…that’s one of the hardest parts, besides being away from family and friends, [I miss] watching UFC in the evening. Any time they’re live is a lot of fun. In Ireland I have trouble getting up at 4am to watch them live. I like my beauty sleep, so I’m pretty grumpy.

UFC: Is there anything you learned while you were studying for your engineering degree that actually helps you as a fighter?

BK: I think engineering school, more than any technical knowledge they give you, --you don’t need to really know how to calculate torque, you can find that out---that’s not the most valuable skill they teach you; they really teach you how to approach problems, how to problem solve. That’s definitely benefitted my game.

I’m always looking at improving my process. The training camps are all recorded, and that way I can look back on it and know exactly what I did. What way my conditioning like? Where was my weight? Then we can reflect on that for camps moving forward. When you spar, if you don’t record it, you don’t have a feedback loop. That’s a big thing in engineering is always being able to look back on something; test it. Did it work? Having my sparring recorded, I can look back like “Ok, there’s definitely areas I can improve,” and you can find those areas. Otherwise it’s either a “good day” or a “bad day” and you don’t really know why it was a good day or a bad day.

UFC: You’ve said you want to make a statement in the division this weekend. What’s the outlook for you among the bantamweights?

BK: I didn’t start competing in this sport because I wanted to just try my hand at it. At the end of the day, I’m here to become a champion. That’s what I want. At the end of my career, if I fall short of that, I can look back on it and see the whole amazing journey and appreciate that for what it is. In the moment it’s a fine balance of being happy with where I am—and I’m certainly happy with where I am—but also being hungry for more. I’m chasing that belt, and that’s where I want to be.