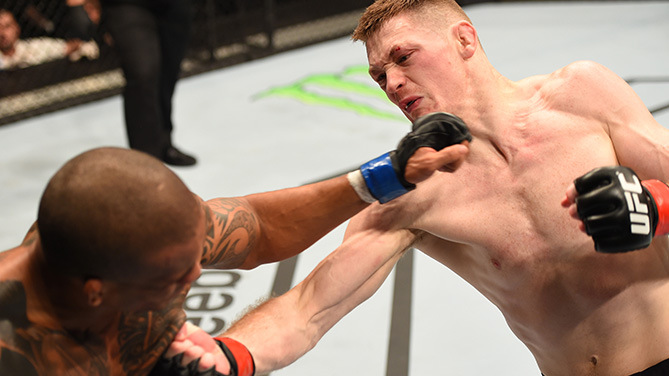 On Saturday, October 24 UFC® will make its highly anticipated return to Dublin, Ireland. And with less than four weeks until tickets to the event go on sale, the organisation has confirmed five exciting match ups that will feature on the fight card.
In the main event Ireland’s own Joseph “Irish” Duffy will face the biggest challenge of his professional career to date, as he takes on top 15 ranked UFC lightweight, Dustin “The Diamond” Poirier.
After signing with UFC in March of this year, Duffy made his debut at UFC 185: PETTIS vs. DOS ANJOS where he enjoyed a round one TKO win over Jake Lindsay. Duffy went on to win his second bout in July, this time defeating Brazilian lightweight Ivan Jorge via submission in the first round, a victory which secured the Irishman a Performance of the Night Bonus.
Poirier, meanwhile, also comes into the headline bout on the back of two straight wins inside the Octagon™. A recent move up to lightweight has seen Poirier go from strength to strength and the American now represents arguably one of the biggest threats inside the 155lbs division.
While Poirier and Duffy have never before met in a professional bout, both fighters have experience in facing off against one of the UFC’s most high profile competitors, “The Notorious” Conor McGregor. With Duffy having secured a win over the interim featherweight world champion prior to signing with UFC, and Poirier suffering defeat at the hands of McGregor just last year, fans all over the world will be eager to discover which of these two fighters will come out on stop, when they meet on October 24th.
UFC FIGHT NIGHT: POIRIER vs. DUFFY will also feature a welterweight bout between Ireland’s Cathal Pendred and English newcomer Tom Breese. Unbeaten in his professional MMA career, Breese – who fights out of Birmingham, England – defeated Luiz Dutra with a spectacular TKO finish in his UFC debut, back in May. His opponent, Pendred, meanwhile began his UFC career by securing four back to back wins, only to suffer a loss to John Howard at UFC 189: MENDES vs. McGREGOR. Having enjoyed a win in front of home fans in Dublin last year, Pendred will no doubt be looking to replicate that success this time around. 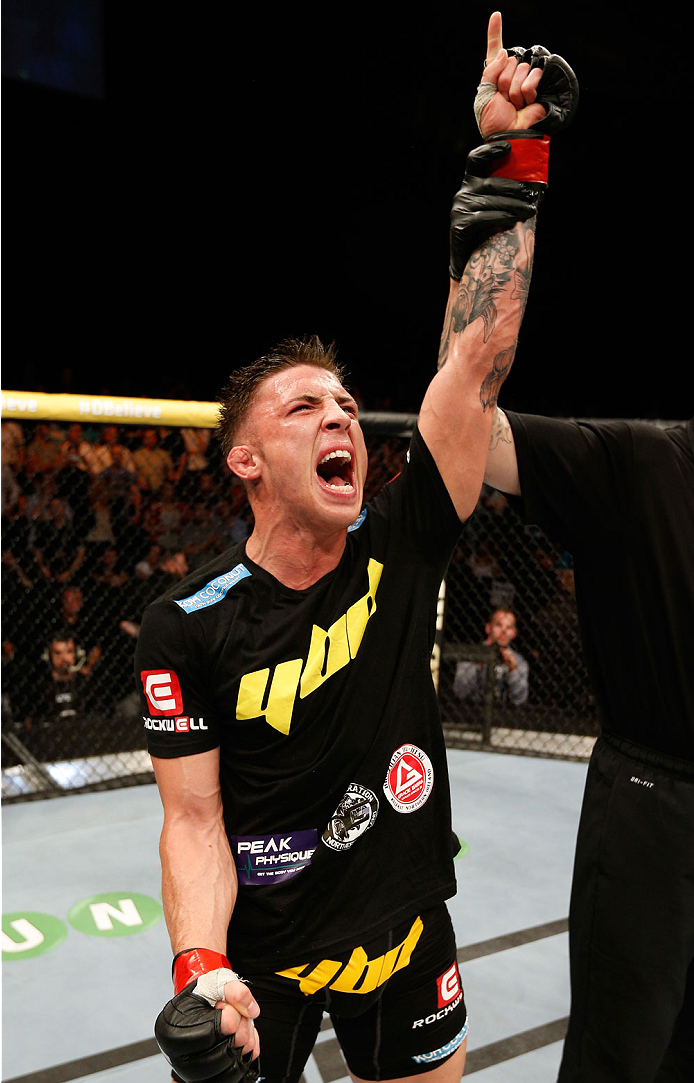 Northern Ireland’s “Stormin” Norman Parke will also feature on the fight card in Dublin, as he takes on Reza “Mad Dog” Madadi. Madadi – a favourite amongst European fight fans – makes his highly anticipated return to UFC, following an absence of more than two years. Parke, meanwhile, will be looking to bounce back following two hard fought losses this year at the hands of Brazilian lightweights Gleison Tibau and Francisco Trinaldo.
Also confirmed by UFC is a middleweight bout between Scott Askham and Krzysztof Jotko, who hold professional records of 13-1-0 and 15-1-0 respectively. In July, Englishman Askham featured on the UFC’s card in Berlin where he secured an impressive TKO win over Brazilian Antonio Dos Santos. Poland’s Jotko, meanwhile, will return to action after almost a year out of action through injury.
South African middleweight Garreth “Soldierboy” McLellan will also make the journey to Ireland to compete on October 24th. McLellan holds a professional record of 11-3-0 and made his UFC debut in April this year, where he suffered a unanimous decision loss to Poland’s Bartosz “The Butcher” Fabinski. McLellan will face USA’s Bubba “The Fighting Texas Aggie” Bush, who fights out of College Station, Texas and holds a professional record of 8-3-0.
UFC FIGHT NIGHT: POIRIER vs. DUFFY marks the UFC’s return to Dublin, following a hugely successful event in the city, in July 2014. Tickets to the 2014 event sold out in under an hour and a similar response is expected from fans this year when tickets are released.
Tickets for UFC FIGHT NIGHT®: POIRIER vs. DUFFY will go on sale to UFC FIGHT CLUB® members at 10:00 a.m. IST on Wednesday September 2, with Sun+ subscribers also getting priority access from 12:00 p.m. IST.
Tickets will become available to UFC Newsletter subscribers on Friday September 4 at 10:00 a.m. IST with general sale taking place from 12:00 p.m. IST.
In order to avoid disappointment, fans are encouraged to register their interest via this LINK for UFC FIGHT NIGHT: POIRIER vs. DUFFY to receive information and reminders about the ticket sale.