Fisher Ready for One More Go Round with Stout

"When people think of Spencer Fisher and Sam Stout, they won’t say one
name without the other, and I think this will really solidify where we
stand." - Spencer Fisher 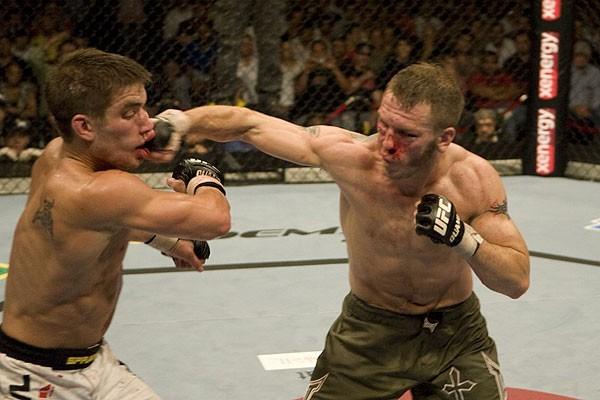 For 35 years, Spencer Fisher assumed he could get things done himself. In year 36, he realized that he needed a little help. So he packed up his bags, left his wife and kids at home for a few weeks and went out west. It was the best thing he could have done for his mixed martial arts career.

“No matter what point in life you’re at, you need a coach, and I’ve been trying to do this myself,” said Fisher, who is approaching his 10th year as a pro. “I probably knew enough to do it, but you need someone behind that watch, someone to tell you ‘one more round.’ You really do need that, and it’s always been a dream of mine to train with the likes of Freddie Roach and Rafael Cordeiro. So now I’ve done these things.”

If you’re a professional fighter, amateur fighter, or a fan of combat sports, the names Roach and Cordeiro should instantly denote ‘world-class’ in your mind when it comes to coaching. Roach currently works with Manny Pacquiao and Amir Khan, among others, and is a multiple-time winner of boxing’s Trainer of the Year award. Cordeiro was the maestro of the feared Chute Boxe team in its prime and still works today with MMA stalwarts like Wanderlei Silva, Mark Munoz, and Fabricio Werdum. So to get a few minutes to pick either man’s brain at the Wild Card and Kings MMA gyms in southern California would be worth the trip; to be out there for a training camp is priceless.

“That’s why I wanted to come out here and change up,” said Fisher. “I wanted a different look, and Cordeiro really compliments my kind of aggressive style and he added a few things. And Freddie Roach is the absolute master. I’ve been at Wild Card and at Kings for this fight, and it’s been a dream come true coming down here, and we’re gonna find out just what the difference is gonna be this time.”

This time is Friday night’s co-main event in Atlantic City against a familiar face in Sam Stout. Fisher and the Canadian have met twice before, splitting their bouts. This rubber match will settle the score and it’s the kind of motivating bout that can push a veteran to new heights in the gym. And Fisher needed both the motivation and the change in scenery after losing four of his last five bouts dating back to October of 2009. But with nearly a year between his August 2011 loss to Thiago Tavares and Friday’s bout, the 36-year old native of Cashiers, North Carolina had the time to rest and get excited to fight again.

“I took some time off to heal up a bit and fix some things, and it’s also given me time to rejuvenate myself,” he said. “And I don’t want to sound cliché, but I’m really just gonna try to go out there and get after this fight again.”

Stout is the perfect foil. In six rounds of action, Stout took fight number one in 2006 and Fisher evened things up in 2007, and both were instant classics that made it clear that when you talked about one of these lightweights, the other’s name would have to follow eventually.

“We kinda go together, like the Forrest Griffin and Stephan Bonnar of the lightweights, and you can expect the same thing coming up,” said Fisher. “He (Stout) is a great fighter, he’s very well-rounded, and he hasn’t shown off much of his jiu-jitsu, but I’m sure he has it. His wrestling takedown defense is great as well, and I’ve been working on all aspects – what to do if I get him down, and where to go from there.”

Groundfighting? With Fisher and Stout? Don’t be so surprised, says the “King.”

“I think this fight’s gonna have everything in it,” he said. “At first I was kinda thinking that it would be all standup, but it’s a fight, and anything can happen. I might be looking for single legs or doubles, who knows, and he might be doing the same thing, so I expect a fight that could take place anywhere.”

That’s the smart approach, the veteran’s way of being prepared for anything, but if you were a betting man or woman, the odds dictate that this one will be decided the way the first two were: on the feet. It’s a daunting proposition for both fighters, knowing that the man who took you to the athletic version of Hell in two previous bouts is going to be standing there once again, likely for 15 more minutes. But that’s what guys like Fisher and Stout do. They fight and fight and fight some more until the bell tells them that it’s okay to stop. For a decade, that’s been Spencer Fisher’s life, but it may not be for much longer.

“Talk to me after the fight,” he said when asked about his future in the sport. He talks about missing his daughters’ birthdays due to his training and fighting schedule, and you can tell that it hurts him more than any punch he’s taken over the years.

“Stuff like that is starting to catch up with me, so I don’t know,” he admits. “You’ll have to ask me again after fight night.”

Fisher knows he can’t do this forever, and his aggressive style was never one meant for longevity. But on Friday night, with his friendly rival staring at him from across the Octagon, he will forget being 36 years old as he fights as if future immortality is on the line. And for him it is.

“No one ever comes up to me without bringing up our fights,” he said. “Win or lose, those fights are great, and I’m looking forward to this. It scares me, it excites me, and I don’t think you can ask for a better fight. A lot of fights don’t live up to the hype, but I’m really looking to do it. Of course, on a perfect night I go out there and finish him, but I think the fans want to see a three round action-packed fight again and that’s exactly what I’m looking to bring to the table. When people think of Spencer Fisher and Sam Stout, they won’t say one name without the other, and I think this will really solidify where we stand.”