In first non-title bout since 2014, nothing has changed for Jedrzejczyk 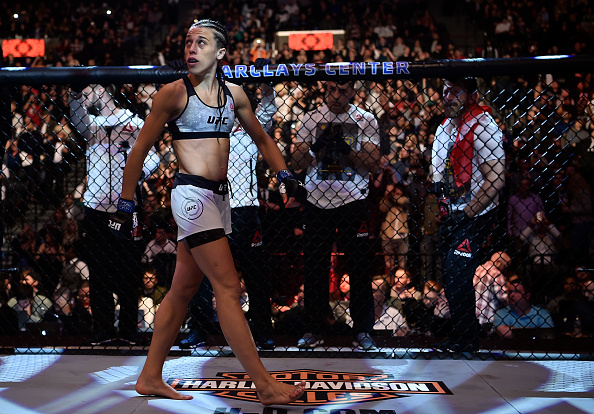 What makes a champion? It’s a question Joanna Jedrzejczyk was asked endless times during her reign at the top of the UFC’s strawweight division from 2015 to 2017, and she had her own answers.

“I thought maybe talent, maybe hard work,” she said. “But after so many years of training and titles, I know that it’s discipline.”

That discipline keeps Jedrzejczyk in the gym, even after the loss of her title to Rose Namajunas in November of last year and a subsequent defeat to the current champ in April. This Saturday, she returns to the Octagon to face Tecia Torres in her first non-title bout since December 2014, but nothing has changed, whether that’s referring to the work she puts in or any external pressure.

“I don’t feel pressure,” she said. “The pressure is the same as always and I keep it on myself. Even when the training is good, I always feel like I can do something better and I can change something. So I push myself. And when they ask what motivates me – it’s myself, my goals and my dreams. There are people who can say, ‘Do this, do that, push more,’ but if you’re not willing to do this, you’re not going to do it. So I keep the pressure on myself.”

Discipline. Hard work. Self-motivation. All key aspects of making a champion, but perhaps the true secret came shortly after Jedrzejczyk’s loss to Namajunas in their UFC 223 rematch. It was a fight that once again proved the Poland native’s elite status, even if she didn’t get the nod on the scorecards. And with that done and the ghosts of her first-round knockout loss to “Thug Rose” put to bed, most expected that Namajunas would go ten pounds north to chase gold in the flyweight division. With five successful title defenses at 115 pounds under her belt, there was nothing left to prove in the weight class, but apparently there was, as it was soon announced that Jedrzejczyk was staying at strawweight to face Torres.

There’s the answer. Being stubborn is what makes a champion, belt or no belt.

And even though Namajunas is the landlord these days, Jedrzejczyk is determined to make a hostile takeover of that strawweight house before all is said and done.

“Tecia Torres fought Jessica Andrade, who is very close to a title shot, but you know what, after I beat Tecia Torres, I will get the title shot,” she said. “Because I will surprise the world and I will prove who is the best. And I keep my head higher because I can’t be ashamed because I gave such a good fight with Rose Namajunas and we showed that the top fighters fighting for the belt are different than the rest of the division.”

Jedrzejczyk, still the number one contender at strawweight, holds wins over the remainder of the top six with the exception of Torres, and it’s clear that she believes a big victory over the “Tiny Tornado” will push her into a third meeting with Namajunas.

“Prove that you’re worth it, prove that you really deserve that and give a championship fight,” Jedrzejczyk said of her peers chasing a meeting with the champ. “But they are just talking and talking and talking. Be quiet. Shut your mouth. If there’s a time to talk, talk. But first prove it in the gym every day.”

And then prove it on fight night, which Jedrzejczyk believes she did in the rematch with Namajunas, only to have the judges score the bout in the Milwaukee native’s favor.

“When Bruce Buffer was saying ‘And,’ for me it was like in slow motion,” she recalled. “I remember I turned my head in his direction and then he said, ‘And still.’ Really? Why? But even though I lost, I didn’t feel like a loser. I felt like a winner. That’s the problem with these sports, that you cannot take second place. You win or you lose. But people shouldn’t call the people who lose the fight a loser because we both are winners. We’re putting in the same work and it’s all about this day, the emotions, everything. But I think I won that fight.”

That’s enough for Jedrzejczyk these days, even though she doesn’t have the belt in her possession. In her mind, she’s still the best strawweight on the planet, and it’s only a matter of time until the world knows it again. There’s that stubborn streak again, but while she is determined to beat Torres, get a third fight with Namajunas and then regain her title, she is not letting that plan take over her existence. Yes, there is hard work to be done, sacrifices to be made and fights to be fought. But that’s not all.

“I know who I am,” Jedrzejczyk said. “Today I’m a fighter. Maybe in a year or two years I’m going to be a mother. I’ve said this before; this is only part of my life. I’m not only an athlete. I’m a good person who loves other hobbies and stuff. I’m enjoying this. Fighting, training, it’s my job to do as well, but I have other things in my life and I’m enjoying my life. And every part of our life is a different story and I will write other stories very soon. So I don’t focus on the past, but on the future, and that’s why I’m looking forward every day.”

In other words, she’ll honestly answer questions about her fights with Namajunas, her championship reign and what got her to this point, but it’s not the kind of information the 30-year-old is volunteering. What matters is today, tomorrow, the next day and so on and so on.

So what’s next for Joanna Jedrzejczyk”

“Okay,” she said. “Beat Tecia Torres and I go for the belt after this because I will prove with my performance that I’m the best. I had to prove to myself that I’m simply the best, and I’m the fastest, I’m the strongest and the smartest and the best strawweight in the world. It’s going to be an amazing fight and that’s what drives me right now. I love it.”