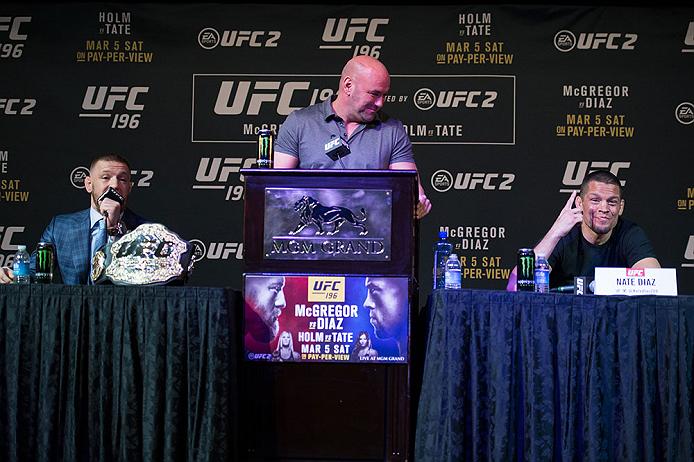 Some things are good on their own, but even better when you put them together.

Sunny days and cold beers; great on their own, unbeatable as a combination. Peanut butter and bacon; terrific individually, but also the most unexpectedly amazing sandwich combination you’ve had in your life, trust me.

Nate Diaz and Conor McGregor fit into this category as well. Individually, both are charismatic and engaging – capable of captivating an audience with their words and their skills once they step into the Octagon – but when you put them together, something even magical happens, even if that magic comes with a NSFW soundtrack.

Just in case you’ve been living under a rock for the past nine months, here’s a quick refresher course in some of the verbal sparring that has taken place between these two in the past.

Fighting for the first time in a year, Diaz returned to the Octagon and put on a boxing clinic against Michael Johnson, stymieing the elite lightweight’s advances with his stiff jab and slick counters. When Joe Rogan asked him about the performance, Diaz made a sharp left, ignoring the question and using the opportunity to make his feelings about “The Notorious” one known on national television.

At the time, the call-out seemed completely out of left field, but there was also something appealing about the potential of the seasoned veteran that had been around the block and never been given a chance to really shine in the spotlight taking aim at the brash upstart that had taken the UFC by storm.

Less than two weeks before he was supposed to face McGregor in a “Champion vs. Champion” clash at UFC 196, then-lightweight champ Rafael Dos Anjos was forced to pull out of the fight due to a foot injury. In the 48 hours that followed, various fighters put their names forward for the opportunity to face McGregor and one quickly came to the forefront as the leading candidate for the spot: Nate Diaz.

Three days after dos Anjos was pulled from the bout, McGregor vs. Diaz was official and the soon to be opponents sat down at the UFC GYM in Torrance, California for an impromptu press conference that quickly became a thing of legend and damn near broke the Internet.

The two went back-and-forth from the outset, usually with more curse words than common phrases with two things being clear at the close of the event: this was going to be an amazingly fun fight and neither guy gives a BLEEP!

Eight days after they declared how few ***** they give in Torrance, McGregor and Diaz were on the stage inside the Ka Theatre at the MGM Grand for the UFC 196 Pre-Fight Press Conference. While the occasional question was directed to both Holly Holm and Miesha Tate, they too were more than happy to sit back and enjoy the free entertainment provided whenever Diaz and McGregor are on the microphone.

While things started slowly, they escalated quicker than the news team melee in Anchorman, even without Brick killing some guy with a trident.

McGregor delivered his trademark verbal takedown of prior opponents and made dramatic predictions about dominating Diaz a few days later, but the former Ultimate Fighter winner earned a knockout victory at the press conference when he rattled off the established names he trains with in various disciplines and then inquired about who was helping McGregor prepare and how.

“All I see is this guy in the park with the goofball with the ponytail,” said Diaz, referring to McGregor’s movement coach, Ido Portal. “You’re playing touch-butt with that dork in the park. My whole team will beat your whole team’s ass, how ‘bout that?”

Not only were Diaz’ comments comical, they were nearly prophetic as well, as things between the two camps got heated after McGregor took a swipe at Diaz’ hand when the two faced off following the press conference. Members of both teams rushed onto the stage, but cooler heads prevailed.

When the two finally hit the Octagon in the main event of UFC 196, McGregor came out quickly, landing clean lefts on Diaz, bloodying his nose and looking poised to cruise to another victory, but midway through the second round, Diaz got loose and started finding his rhythm.

One shot connected and cause McGregor to stumble. Another crashed home and turned him into the “panic wrestler” he so often mocked. On the mat, Diaz’ superior grappling acumen shone through and less than two weeks after getting the call to fill-in for Dos Anjos, Diaz forced McGregor to tap in the center of the cage.

When Joe Rogan asked if he was surprised with how things played out, Diaz once again dropped a gem on the audience.