There's Still Fire In The Eyes Of Andrei Arlovski

Veteran Heavyweight Stares Down 55th Pro Fight At UFC 271...With No Signs of Stopping
By E. Spencer Kyte, on Twitter @SpencerKyte • Feb. 8, 2022

Saturday night, the former heavyweight champion begins his 23rd year as a professional fighter, competing for the 55th time — and 37th time inside the Octagon — when he takes on Jared Vanderaa in the final preliminary card bout before the UFC 271 pay-per-view main card gets underway.

As someone that has been written off for dead more than a couple times in the past, the fact that Arlovksi not only finds a way to stem the tide, but push back in the other direction nearly every time, adds to his mystique and makes you wonder what kind of anti-aging secrets and tricks to maintain longevity in this grueling sport the divisional fixture has up his sleeve.

“My friends call me as a joke ‘Benjamin Button,’” Arlovski said when asked about the secrets to his longevity, referencing the F. Scott Fitzgerald character that was born resembling an old man and aged backwards. “I don’t know what to say. I’m a happy man. I’m doing what I love to do.

The joy in Arlovski’s voice makes it clear that he truly and honestly does love what he’s doing, and you need to in order to continue to pursue a career in the Octagon after that many years and that many appearances.

A genuine passion for your craft is always going to help propel you forward through rough patches and moments when your drive or focus wane, but it also helps to have a strong support system around you, rooting you on through thick and thin.

Arlovski has that team in place as well.

“My wife, she supports me fully,” offered the veteran heavyweight, who has earned consecutive victories and wins in four of his last five heading into Saturday night’s showdown with Vanderaa in Houston. “She understands I’m doing what I love, and she supports me all the time. My kids support me all the time, too.”

Along with still having an honest-to-goodness enthusiasm for going to the gym each day and stepping into the Octagon on a regular basis, Arlovski also draws inspiration and motivation from other older competitors that have enjoyed success late in their careers, including a close friend who recently ascended to the top of his weight class.

“I had great examples because George Foreman became world champion at 45,” began Arlovski, referencing the Houston area resident who claimed the WBA, IBF, and lineal heavyweight championship titles by knocking out Michael Moorer in 1994. “Glover Teixeira became champion at 42 in Abu Dhabi.”

Teixeira, who visited and trained with Arlovski and the team at American Top Team in early January, became the oldest fighter to claim UFC gold for the first time back in October when he submitted Jan Blachowicz to win the light heavyweight title. 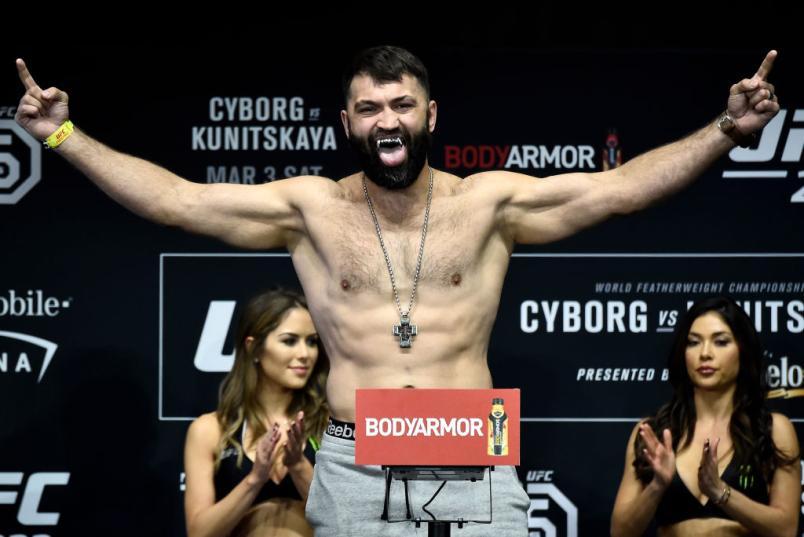 Andrei Arlovski of Belarus poses on the scale during a UFC 222 weigh-in on March 2, 2018 in Las Vegas, Nevada. (Photo by Jeff Bottari/Zuffa LLC)

The two have been friends for some time, and you can hear in the way that Arlovski speaks about the newly minted titleholder that he has a great deal of respect and admiration for his fellow forty-something.

“I was happy for him; he’s an old school guy and I love what he did, how he won the fight,” he said of Teixeira, who is slated to defend his title against Jiri Prochazka at UFC 274 on May 7. “I was truly, truly happy for him because in this world, there are not many people who I have a great (admiration) for and who I fully support, but he is one of them. I was happy that he became world champion.”

He was also inspired.

“I still have some power inside, fire in my eyes,” he added. “Like I said, thank God that I’m doing what I love to do. Every morning when I wake up, I know why I am doing this, who I am doing this for. Every single day I remind myself what I want, why I’m doing this, so that’s it. 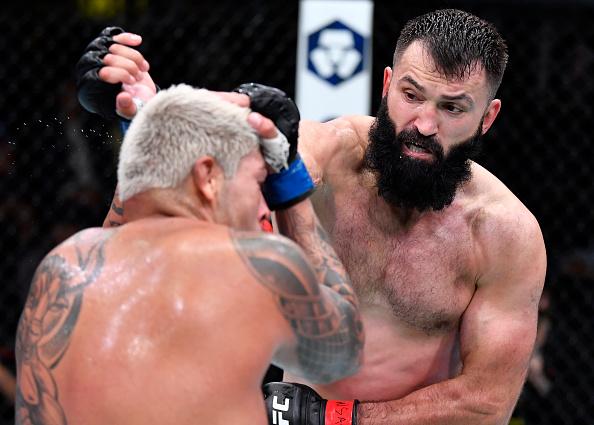 Andrei Arlovski of Belarus punches Carlos Felipe of Brazil in a heavyweight fight during the UFC Fight Night event at UFC APEX on October 16 2021 in Las Vegas Nevada. (Photo by Chris Unger/Zuffa LLC)

More than anything, it’s that last statement — “it’s simple” — that seems to be the defining feature of Arlovski’s approach at this later stage of his career: he keeps things incredibly simple.

Where some competitors get wrapped up in the machinations of their division, caught up in social media firestorms, or focus too much attention on the amount of respect they’re being shown or denied, the 42-year-old “Pitbull” always just keeps it moving.

After defeating Carlos Felipe back in October — a victory he was happy to earn after the Brazilian was quick to bump his gums before and during their fight — Arlovski lobbied to face a Top 10 opponent in his next appearance.

Instead, the UFC opted to align him with Vanderaa, a 29-year-old graduate of Dana White’s Contender Series, who enters Saturday’s event off a loss to Alexandr Romanov.

“One-hundred percent I am happy to compete,” he said. “I get to test my skills against another young, tough opponent; everything is good.”

That doesn’t mean he still wouldn’t like to get a chance to share the Octagon with someone with a number next to their name at some point down the line, it’s just that, as always, the stately heavyweight is far more focused on the task at hand, and happy to let the chips fall where they may in the future.

The Dominance Of Israel Adesanya

“I’m happy to stay busy and win all my fights,” he added. ‘It’s up to UFC and matchmakers to figure out where they’re going to put me. If miracles happen, I would love, of course, to fight Top 5, Top 10, but I understand there are other heavyweights in line, so one step at a time.

“Right now, I have young, tough opponent, so I have to focus on this fight, and we’ll see what happens after.”