"Fire" In the House - Marshall Returns

"The new me is let's go get some. It is win or lose. Someone is going to win or lose decisively.” 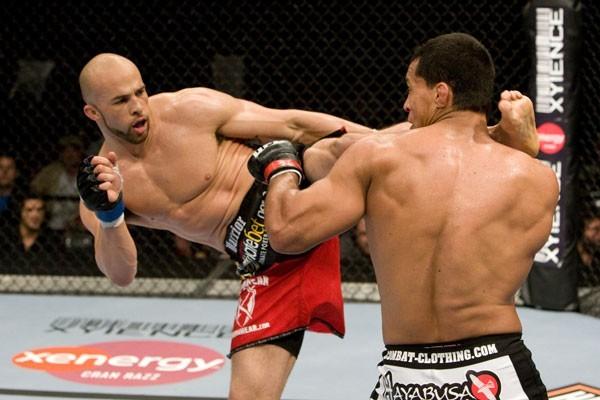 One could describe the above statement as the mantra Eliot “The Fire” Marshall has been living by for the past year. It is a simple metaphor with a simple meaning: Eliot Marshall wants to fight in the UFC and will not accept any substitutes. After an unforeseen cut from the UFC, a full year in exile, a three fight win streak and an injury to another light heavyweight, “The Fire” Marshall is finally back and ready to play in the mixed martial arts version of the NFL.

“It will be almost 365 days since my last fight in the Octagon when I step in on the 19th,” says Marshall, who received his walking papers from the UFC after a less than exciting split decision loss to Vladimir Matyushenko on March 21, 2010. The cut was unexpected because The Ultimate Fighter season 8 alum was previously 3 - 0 in the UFC cage. But the UFC’s roster is not maintained purely on record alone; it is also about fighting with a burning rage to win at all costs and Marshall believes he now has that.

“The old me was more of a boxing style. I could sit back there and not get hit all day. Win decisions all day. The new me is let's go get some. It is win or lose. Someone is going to win or lose decisively.”

At UFC 128, “The Fire” will be unveiling this more aggressive style against Brazilian bomber Luiz Cane. Arguably, there may not be anyone better to do so against, as Cane is known specifically for bringing it early and often to his opponents for better or for worse.

Cain has 11 victories and eight are knockouts. He also has three losses and two are knockouts. Almost all of these fights ended in the first round. Basically, “Banha” is a head hunter looking for a “Knockout of the Night” bonus and he does not think twice about possibly being on the receiving end of it.

In conclusion, Luiz Cane fights to be exciting and that’s exactly what Marshall wants.

“I like it because if a fight starts in a slow dance then I sometimes stick to that slow dance, but he doesn't slow dance.”

It is serendipitous that this matchup is even happening. Cane was originally slated to face recent “Knockout of the Night” award winner Karlos Vemola. Less than a month away from the fight, “The Terminator” was forced to withdraw due to injury. Meanwhile in Colorado, Marshall was busy training and monitoring the internet for UFC injury reports for his chance to get back into the Octagon.

“I contacted the UFC actually. I saw it on the internet that Karlos Vemola got hurt and I told my management group let's jump on this. What's the worst that could happen? I'm already out of the UFC. If you want to fight for the UFC and you keep up on when people get injured and you don't try and get a hold of Joe Silva every single time then to me you would be an idiot. I don’t know about them, but I want to fight in the UFC.”

Fortune favors the bold, but Eliot Marshall’s “fortune” is facing Cane’s heavy handed attack. “He's a tough guy, but I don't care,” explains Marshall who was willing to take on anyone just to get back to his former home. “They could have told me that Junior Dos Santos got hurt and I was fighting Brock Lesnar and I would've done it just to get back in the UFC. A fight's a fight. Cane comes forward and scraps, so I guess we're going to have to scrap.”

“The Fire”, with his black belt in Jiu-Jitsu, has never had an issue finishing fights once they hit the ground with 5 of his 11 wins coming via submission. But this confidence and willingness, almost “wantingness”, to stand and trade with a known knockout artist like Cane is the by-product of Marshall’s training at the Grudge Training Center with Trevor Wittman and Bryan Youngs.

“Trevor made a great defensive foundation for me. I understand the defensive aspects of striking and everything, which is very important. Now when I'm working on the Thai boxing with Bryan Youngs, I can focus on offense, a lot of offense. We're having fun. It's very aggressive. Bryan is never a fan of throwing a kick light in practice. If you pull a kick in practice then you're going to pull them in the fight. You need to have that forward mentality, a go mentality.”

This adjustment in Marshall’s fighting attitude did not happen overnight or even in the gym, it happened where it mattered most: a fight. “My first fight outside the UFC wasn't the best,” says Marshall about his decision victory over Josh Haynes at local show in Denver last August. “I was still fighting in such a way that I was avoiding the other person's style so much because that was the gameplan for my last couple fights in the UFC. In the last round of that first fight though I started to feel the transformation and going into that next fight I felt like I really took it to the guy. In my last fight, I felt like I finally came through the tunnel and out the other end.”

If one wants to know how excited Eliot Marshall is about fighting for the UFC again, look no further than his most recent professional fight. The details surrounding this fight, which took place in Punta Cana, Dominican Republic are sort of hard to come by. “The Fire” did improve his record to 11-3 with a quick first round armbar submission over Chris McNally, but a time signature for it or video of it are almost non-existent. It has been reported that on this card featuring several former UFC fighters that the official clock was kept on someone’s cell phone.

“That show was crazy. No one got paid! Fighting in the UFC and then fighting in that? There were 40 people in the stands in this gymnasium. We, the fighters, were all sitting on this stage in the back of this room. We're just sitting there watching the fights. Three or four fights before it was your fight you would go get warmed up then you would fight and then sit back on stage and watch the other fights. There was nobody in the crowd! The promoters did a terrible job at everything. It was sad. They were great fights. Every fight was an exciting fight or a quick finish. They were exciting fights and it was just sad that no one got to see it.”

Now, the 30 year old Marshall will fight for the thousands in attendance at the Prudential Center in Newark, New Jersey. “I'm excited to go in there and get tired and see who is going to fall apart first,” says Marshall, who will have his work cut out for him in Cane, who is desperately searching for a win after back-to-back losses. “I'm excited that I'm getting some closure to this situation. It bugged me every day and it bugs me right now because I haven't fought yet in the Octagon.”

On March 19th, “The Fire” returns to the NFL of MMA looking to claim his own spot on the roster and not just replace someone. “I hope I go in and destroy Luiz Cane in about a minute - that would be phenomenal,” continues Marshall about an ideal outcome, “and I also hope he doesn't lose his job.” But as he knows firsthand that is not up to him, so “The Fire” Marshall is zoned in on one outcome, “The reality is I just have one thing to do; I have to whoop his ass.”