Finishing Fights is Jim Miller's Business, and Business is Good

“A lot of guys say they’re looking for a war and a Fight of the Night. I don’t train for wars; I train for massacres.” - Jim Miller 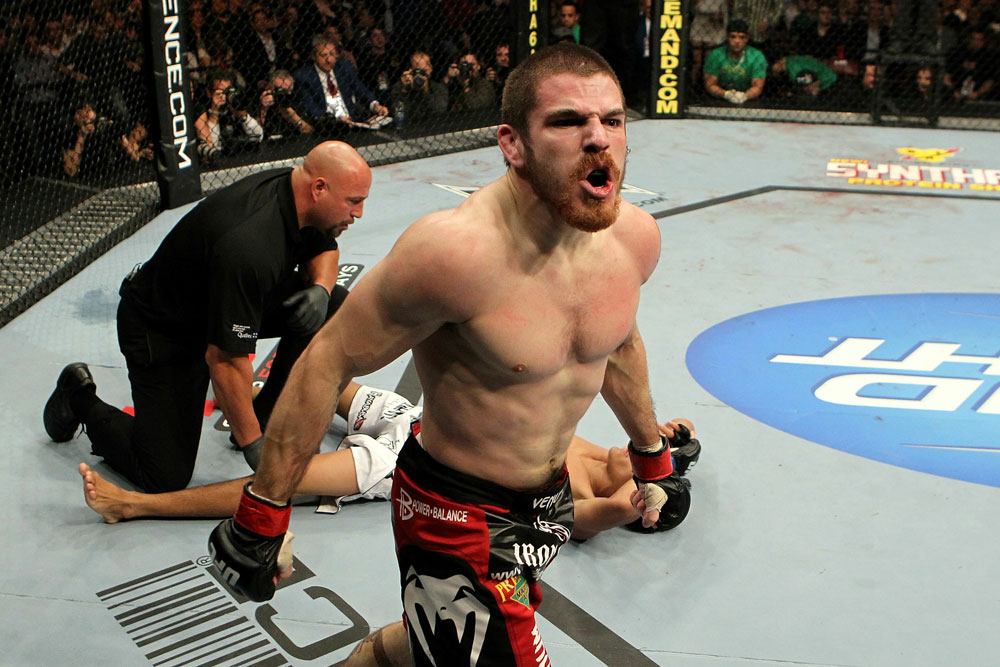 The word on the street when it comes to Sunday’s UFC Live bout between lightweight contenders Jim Miller and Ben Henderson is that, given the styles of both men, this might be not just a Fight of the Night candidate, but a choice for best fight of 2011. New Jersey’s Miller is cool with that if it happens, but he’s not training for that possibility.

“A lot of guys say they’re looking for a war and a Fight of the Night. I don’t train for wars; I train for massacres,” said Miller, 20-2 with a seven fight UFC winning streak. “I’m looking to make this where my first punch that lands is the end of his night or pounce on him in the first couple seconds and sub him out. And if that doesn’t work, then I’m just using it to set up the finish. Knowing that he’s a tough opponent doesn’t really change my attitude or my outlook on the fight. I’ve been in tough fights, I’ve gone 15 minutes hard, so I know I can do it. I don’t need to go into the gym and beat myself up and try to build that confidence. I’d rather just train to get better, knowing in the back of my head that if it goes 15 minutes, I’ve got it.”

In a world where many athletes are content to say what they think you want to hear, or at least what looks good in print, Miller is, to steal the UFC’s tagline, “as real as it gets.” If the first thing you think of when you hear New Jersey is Bruce Springsteen and not Snooki, Miller’s your guy, and he’s no nonsense to the core. So when you hear him field question after question about getting a possible title shot at the winner of the third bout between 155-pound boss Frankie Edgar and challenger Gray Maynard, you can almost hear him cringe. Is it getting a little crazy for him when it comes to that topic?

“A little bit,” he chuckles.

At the same time though, Miller takes each query with grace, and his answer is what would come out of the mouth of any fighter with a major bout coming up BEFORE any serious title discussion can take place. And in Miller’s case, he really means it.

“I take every fight like it’s the biggest fight because it is,” he said. “Every fight has implications on your career. I’ve got nine wins in the UFC and every one of them has been important, so if I lost one of those fights, I wouldn’t be where I am today. So I just focus on the fight in front of me, knowing that anybody that I step in there against has the potential to beat me if I make mistakes. I focus on not making any mistakes and coming out the winner.”

The hype train for Miller and a world title shot has been picking up steam with each passing bout, with his last two victories (both finishes) over Charles Oliveira and Kamal Shalorus really getting the fight world in his corner. Yet while the questions about facing the champ (and the first man to beat him, back in 2006) have been multiplying, the Sparta native hasn’t blinked an eye in the spotlight, primarily because he’s had the same attitude on fighting that’s been with him since he turned pro in 2005.

“I want to win, I want to dominate my opponents, and you can’t take anybody lightly,” said Miller. “This sport is so exciting for me because you haven’t won until you’ve won and you haven’t lost until you’ve lost. The fight can end at any time. You can be technically beating somebody and get hit with a punch and it’s lights out and the fight’s over, you lose. So I think it’s weird that somebody would step in there and take another guy lightly and not look at it like it’s a huge fight, because they’re all big and everybody’s dangerous, and anything can happen. I train for everybody to be the absolute best in the world at every aspect of the fight, and if they can’t live up to those expectations, then I capitalize on it.”

For a 27-year old prizefighter who specializes in being understated, that may be an even bigger understatement because capitalizing on an opponent’s mistakes doesn’t seem to explain the way Miller finished Oliveira and Shalorus sufficiently. If you’ve been around this game long enough, you can usually see when a submission is being worked for, or when a fighter dropping his left too many times is going to get put to sleep by a right hand. But when Miller took care of his last two foes, there was no such luxury. In a split second, he saw openings and then ended the fights. The speed and finality of Miller’s attack was something to see.

“That’s something I guess I’ve been lucky enough to have,” he said. “Even growing up wrestling, I just attack. You can feel that the opportunity’s just about here and there’s a bolt of energy and you just pounce on it. I like to finish guys. I genuinely, genuinely enjoy it, and if there’s an opportunity, I’m gonna explode on it and try to take it.”

That must take plenty of tape study though, right?

“Honestly, I don’t really study anybody,” Miller admits. “I train to make myself dangerous and that’s what I focus on, just getting better and making them deal with me. I knew against Oliveira that he’s a tough, dangerous kid, but he’s small and not very strong at all, especially compared to the other ’55 pounders I fought in the UFC. So I knew once I got my hands on him that I would have the strength advantage. Shalorus, the way it went was that I was able to wear him down and I knew pretty much that after the beginning of the third round that he had enough. Sometimes you know it and you can feel that the end is near, and it’s coming. That was definitely one of those fights where I knew the finish was coming in that round.”

When you hear Miller talk about fights, you can tell that it’s just not a paycheck for him. It’s his passion and a way of life. And while we all know that this is a sport, complete with all the rules and safeguards that go along with it, Miller also remembers that it’s a fight, and that mentality gives him a substantial edge when it’s time for him to pull the trigger on a finishing blow or submission.

“There are some guys that seem to take it like it’s a sparring session, and don’t seem to take it very seriously,” he said. “I’m in there to win, and there’s a lot riding on each fight. I think what has helped me is that I understand the psychological aspect of the sport, the mental game, a little bit more than some of my peers. I kinda just figured how to turn it on and how to show up for a fight. We don’t have the opportunity to say ‘oh, I had a bad night.’ We only get a couple opportunities a year. We’re thoroughbreds, we’re horses. You get one shot every now and then, and if you don’t show up and step up, that’s your career right there. I’ve been able to focus in and turn that switch on in my head that this is for all the marbles.”

It’s heavy stuff, finishing opponents, fighting for all the marbles, and the kind of things that make this sport an intriguing, yet mysterious one to people outside of the fight community. So while those in and around the Miller clan don’t find anything out of the ordinary with how quiet Jim approaches his sport of choice, that’s not always the case with newbies he runs into. He’s okay with that though.

“To other people, like people you just meet, they still get kinda freaked out about it, like ‘oh my God, that’s gotta be dangerous, isn’t it?’” he laughs. “Not really, it’s just another guy. He’s about your same size and what are they gonna do to you? It’s a lot safer than a lot of other things.”