“I need to show that I’m a finisher,” Peterson said. “I’ve been a finisher in most of my fights; I just need to go out there and do it against the best fighters in the world, and finishing Caceres is exactly what I plan to do on Saturday.”
By Gavin Porter • Jul. 15, 2019

If the UFC awarded belts based off toughness, featherweight Steven Peterson would have one heck of a trophy case. And it’s Peterson’s trademark grit that makes him a must watch this Saturday when he faces Alex “Bruce Leeroy” Caceres.

But after his third career UFC bout, a decision loss to now-lightweight prospect Luis Pena, “Ocho” realized something had to change.

“I’ve always been the toughest guy around, but toughness doesn’t win fights; skills win fights,” Peterson said. “Ever since that last fight, it woke a new hunger in me.”

That hunger formed a motivation that translated into months of grueling training sessions with the talent-rich team at Fortis MMA in Dallas, Texas. The long hours in the gym also mean that fight fans can expect to see the best version of Peterson when he makes the walk to the Octagon inside the AT&T Center.

Peterson admits that fighting at the highest level in the UFC is his dream, but he can’t be content with his performances thus far.

“I need to show that I’m a finisher,” Peterson said. “I’ve been a finisher in most of my fights; I just need to go out there and do it against the best fighters in the world, and finishing Caceres is exactly what I plan to do on Saturday.”

Caceres has been fighting in the UFC for over eight years, and while Peterson respects his foe and understands that Octagon experience favors his opponent, he has unwavering confidence that he will pass the test that is Caceres. 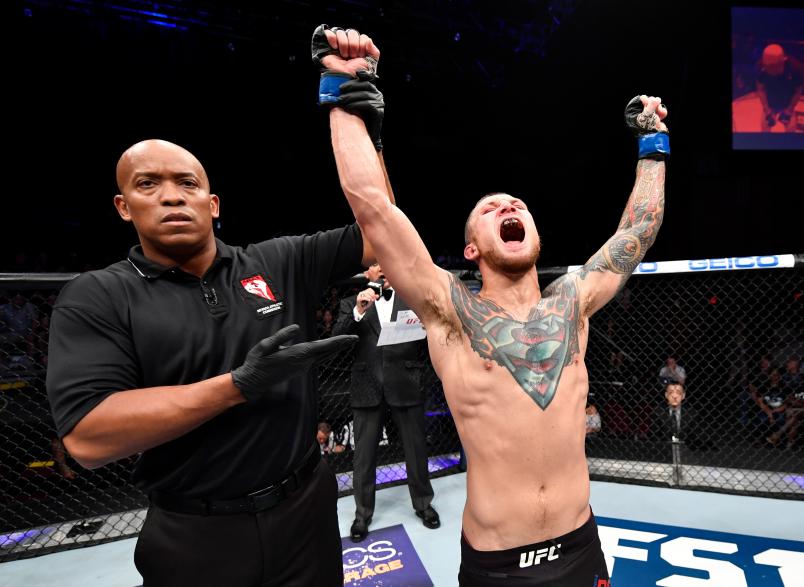 LAS VEGAS, NV - JULY 06: Steven Peterson celebrates after his split-decision victory over Matt Bessette in their featherweight bout during The Ultimate Fighter Finale event inside The Pearl concert theater at Palms Casino Resort on July 6, 2018 in Las Veg

“I feel like ‘Bruce Leeroy’ is kind of a gatekeeper,” Peterson said. “He’s kind of that guy that if you can beat him, then you can be somebody in the UFC.  The fact that I got him means that I can go out there, take this guy out, and make a name for myself.”

Peterson is currently 1-2 since making his debut early last year, but don’t let those losses fool you. “Ocho” made his contests with Pena and Brandon Davis more than competitive, and he showed the UFC brass that he has what it takes to hang with the big boys.

Now that he’s hit a couple of bumps in the road, Peterson is focused on one thing and one thing only: finishing “Bruce Leeroy.”

“Once the fight starts, you can expect a non-stop pace. I’m going to be aggressive and you can expect violence. Violence is a key word,” Peterson said. “Bruce Leeroy’ is a great matchup for me. He’s dynamic, flashy, likes to move around a lot. I’m aggressive I like to come forward, so that plays right into my style.”

With his hunger for winning and technical skill at an all-time high, Peterson is licking his chops to get into that locked cage with Caceres on Saturday. And he has a clear idea of what things will look like once it’s go time.
“It’s going to be like the lion chasing his prey in the cage.”

Make sure you tune into ESPN to watch Peterson take on Caceres in the featured prelim bout on ESPN. The UFC San Antonio prelims start at 6pm/3pm ETPT.