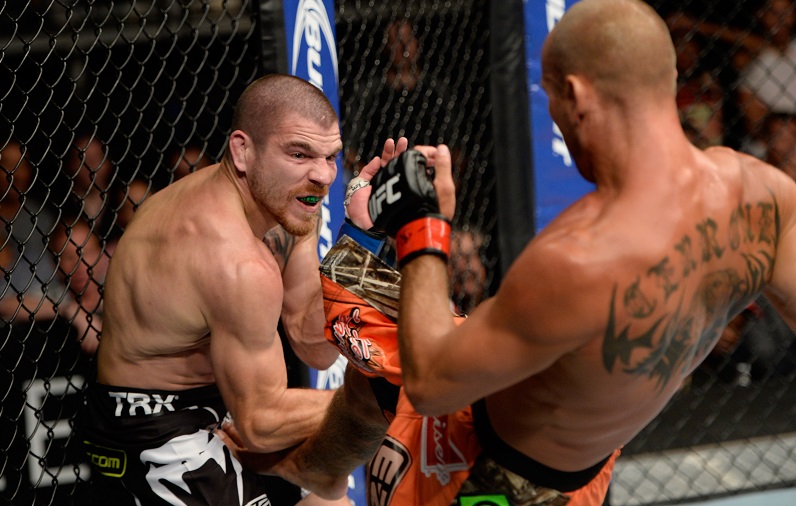 ATLANTIC CITY, NJ, July 16 – Donald Cerrone loves to fight. In fact, he loves it so much that even after apparently stopping Jim Miller in the second round of their UFC Fight Night main event Wednesday at the Revel Casino Hotel, he was willing to do it again. And he did, handing Miller the first knockout loss of his career later in that same round.

The victory was Cerrone’s fourth straight, with each victory coming by way of knockout or submission.

Miller looked to have the upper hand early, as his left hand found the mark several times in the opening stages of the fight, getting Cerrone’s attention and sending “Cowboy” to the mat 90 seconds in. Cerrone bounced back to his feet quickly, but Miller continued to have success with his precision strikes and his grappling. Cerrone did finish the round strong though, with his kicks to the body forcing Miller to slow his pace down until the horn.

In the second, Cerrone’s body attack appeared to finish the fight when he landed with a front kick to the midsection that dropped Miller to the mat. Referee Dan Miragliotta intervened, presumably to inspect the New Jersey native for a low blow, but even Miller said the shot was legal. The bout continued once Miller rose, but Cerrone had a target and he was going to use it, as he attacked the body and even mixed in some head kicks to throw Miller off guard. And it was one of those right kicks to the head that landed flush and sent Miller to the canvas. This time, the bout was called off for good, with Miragliotta halting matters at 3:31 of the round.

Brazil’s Edson Barboza delivered a big win for the fans in his adopted home state of New Jersey, knocking out lightweight veteran Evan Dunham in the first round.

Dunham (14-6) had the right idea as the fight began, using all the available real estate in the Octagon to keep Barboza from getting set to throw his strikes. But you can only keep the Brazilian bomber at bay for so long, and as Dunham stood near the fence, Barboza (14-2) landed with a kick to the body. Dunham dropped to the canvas immediately, with the follow-up barrage from Barboza prompting a stoppage from referee Keith Peterson. The official time was 3:06.

Lightweight prospect Joe Proctor overcame some hard punches from Justin Salas and a nasty welt on the side of his head suffered in the first round to roar back and knock his foe out in the second. 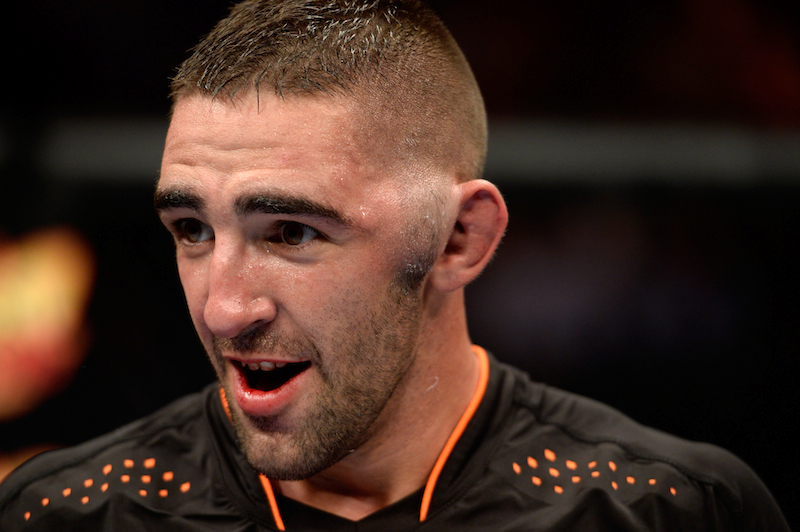 Wrestling, jiu-jitsu – neither came into play in the first round, as Salas and Proctor abandoned their primary disciplines to trade bombs for five minutes instead. When the punishing round was over, Salas was cut and swollen around his right eye, and Proctor not only had a bloody nose, but a huge knot rose on the left side of his head.

New England’s Proctor guaranteed that it wouldn’t be an issue though, as he waited for his moment to strike in the second round, and with his left hand leading the way, he found it with under two minutes left, rocking and dropping Salas and then turning up the heat until referee Gasper Oliver halted the fight at 3:27 of round two.

With a new team and a fresh start, welterweight standout Rick Story delivered his most impressive win in a long time, submitting Brazil’s Leonardo Mafra in the second round.

Story (17-8) said before the fight that he planned to take a more measured approach in the Octagon. That lasted about five seconds before he began throwing haymakers that set up a takedown. From there, Story punished Mafra (11-2) for the rest of the round, preventing him from seeing daylight as he let loose with strikes and kept the Brazilian grounded.

Story’s relentless pace didn’t slow down in the slightest in round two, but this time after getting the takedown, the newest member of the MMA Lab team in Arizona finished the fight, locking in a head and arm choke that forced Mafra to tap out at 2:12 of the frame. 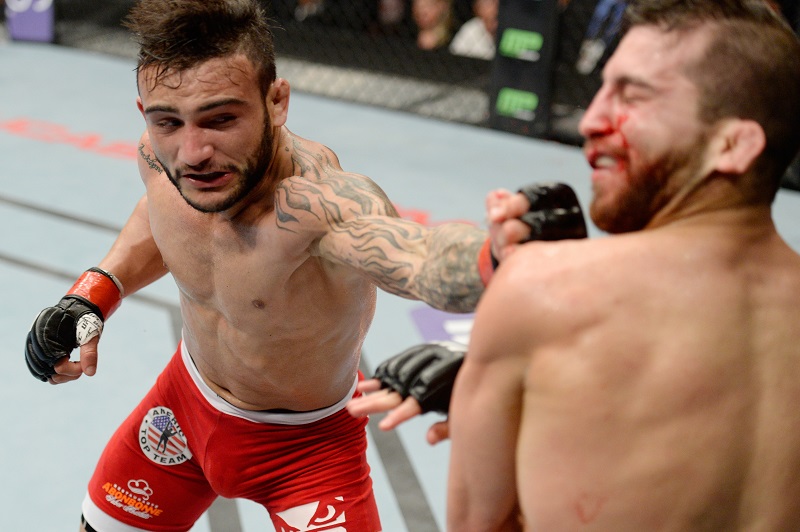 In a memorable scrap between two of the flyweight division’s best, John Lineker pounded out a third-round TKO victory over Alptekin Ozkilic, using his superior firepower to ignite the crowd and cement his place in the 125-pound top ten.

Ozkilic was willing to stand with Lineker as the bout began, and there was a method to his madness, as he let the Brazilian get comfortable before using a couple missed punches to score the takedown. After a spell on the mat, Lineker got to his feet and began landing more of his bombs, with Ozkilic unable to get another takedown, even though he did land his share of hard punches in the midst of some quality exchanges.

The flyweights continued to throw heavyweight bombs in round two, but while Ozkilic’s shots didn’t even make Lineker blink, the body punches and uppercuts thrown by “Hands of Stone” continued to do damage and slow Ozkilic down.

With the crowd roaring and Lineker egging them on, he and Ozkilic didn’t back down from their toe-to-toe battle in the final round, but it was Lineker who kept landing the more meaningful shots. To his credit, the bloodied Ozkilic didn’t shy away from the exchanges, with every punch he took prompting him to throw back two more. By the final minute though, Lineker was unstoppable, and after dropping Ozkilic to the canvas and following up with a couple more shots, referee Keith Peterson had seen enough, calling a stop to the bout at 4:51 of the final frame. 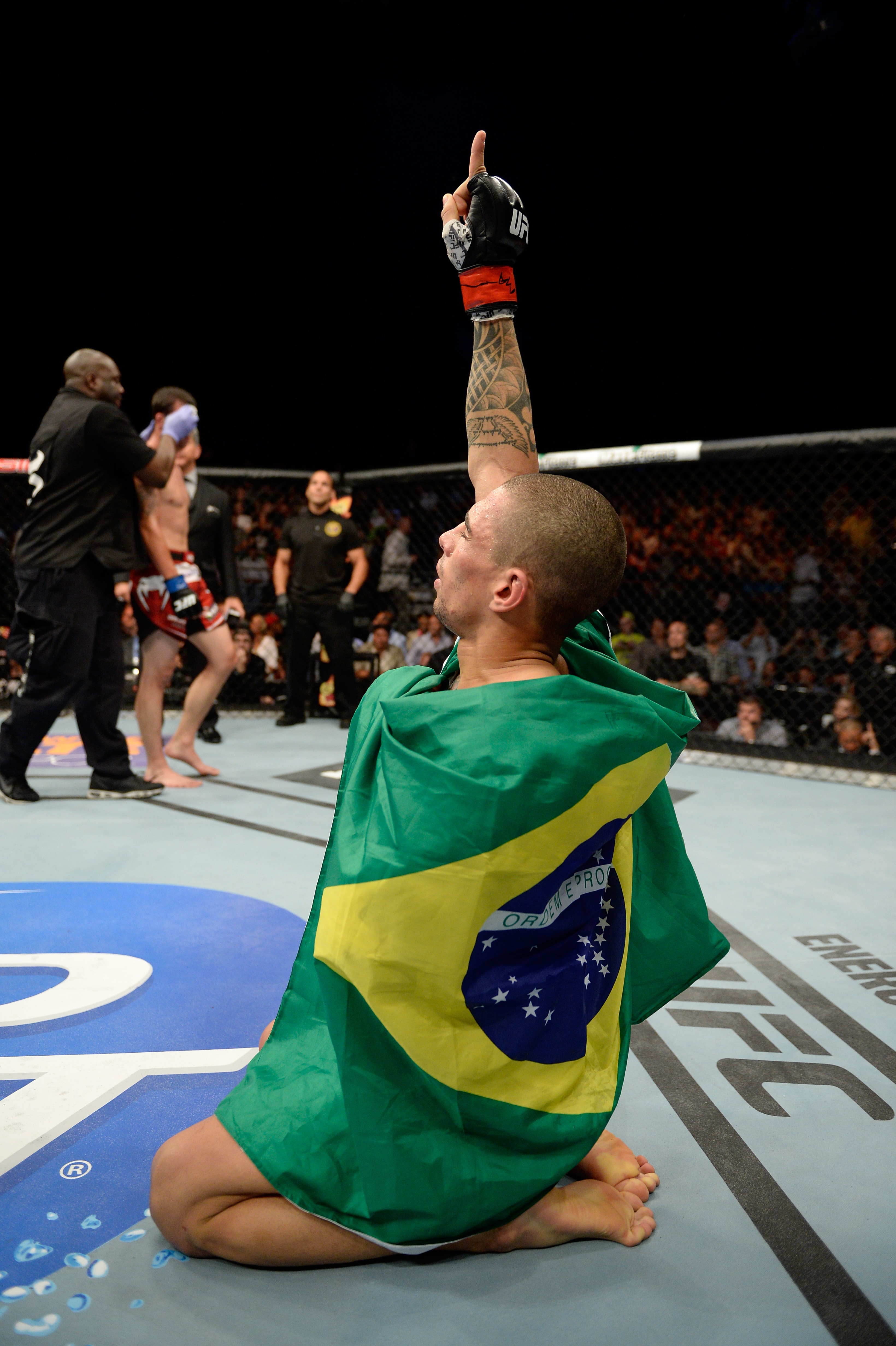 Brazilian prospect Lucas Martins returned to the Octagon after a 10-month layoff and emphatically removed Alex White from the ranks of the unbeaten, knocking “The Spartan” out in the third round of their featherweight bout.

Martins showed no signs of ring rust in his first fight since September of last year, as he calmly stalked White and delivered straight punches that showed the type of chin “The Spartan” had. That wasn’t what the featherweight prospect wanted to display on this night though, and despite the fact that White stayed busy with front kicks and punches upstairs, Martins was unmoved by anything that came his way.

White got on track in round two, as he found his way around Martins’ strikes while keeping his work rate high and even scoring a flash knockdown. But in the third, Martins’ insistence on countering and biding his time paid off, as he cracked White with a straight right that sent him down after a delayed reaction. Once White hit the deck, Martins pounced, with his follow-up attack bringing in referee Gasper Oliver to halt the match at the 2:08 mark.