Finally in UFC, belt is on Gillespie's mind 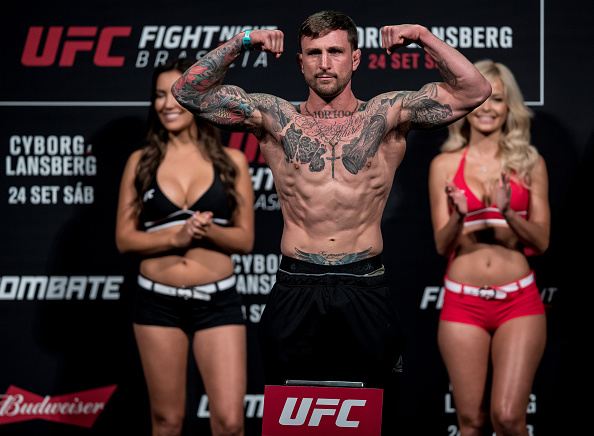 When Gregor Gillespie finished up a stellar wrestling career at Edinboro University, that included a Division I national championship, and began his next athletic chapter as a mixed martial artist, the buzz got going fast. Two, maybe three pro fights, and he would be gracing the Octagon and chasing a world title.

But it didn’t happen that way.

It had nothing to do with his performances, as he won fight after fight, finishing each of them in two rounds or less. No one could even blame the platform he was on, as he competed in the Ring of Combat promotion that graduated several fighters to the UFC. Just call it one of those things, but for over two years, he waited.

“I always want things now, that’s just my personality,” said Gillespie. “But I felt like I had done my time by my sixth fight and I think that hurt me mentality for my seventh fight against Sidney Outlaw, which was definitely my worst performance and I think that was because of a lack of excitement about the fight. I felt like I was beyond that at that point.”
Get ready for UFC 210: Check out the full fight card | Reasons to watch | Cheat Sheet | Ouch! Feel Rumble's power | DC-Rumble, Weidman-Mousasi ready to fight | Listen: Cynthia Calvillo joins UFC Unfiltered, Katlyn Chookagian | Watch: UFC 210 Countdown | Snoop Dogg breaks down DC ... and Rumble | How to order the PPV

Defending his ROC lightweight title for the second time in June 2016, Gillespie almost got caught napping by Outlaw, who took the Rochester native three rounds before “The Gift” pulled out a split decision win. And with that victory, he was done fighting until he got the call to the UFC.

Risky? Yes. But as he explains, life isn’t as easy as it seems on the regional MMA circuit for a hot prospect expected to beat everyone in his path.

“It’s a lose-lose,” Gillespie explains. “You have to win because you’re supposed to win. God forbid you don’t win, and now you lost to a guy you’re supposed to beat and it’s ‘We told you he wasn’t as good as you said he was.’ And if you lose one of those fights, you’ve got to win five in a row again. It’s a tough situation. Plus, I’m a wrestling trainer, I’m a full-time fighter, I’m a ticket salesman, a t-shirt distributor and my own manager trying to get sponsors.”

Luckily, he didn’t have to wait too long, as the UFC signed him for a bout last September against former TUF Brazil winner Glaico Franca. In Brazil. But Gillespie passed his test with flying colors, moving to 8-0 with a unanimous decision victory. Now he was where he always wanted to be, and where he could pursue the championship belt he’s wanted.

“It’s tough to win the (UFC) belt when you’re not in the UFC,” he said. “So getting to the UFC revitalizes you a little bit, and it does change your mentality. I’m in the ballpark. I can’t hit a home run if I’m not at the plate. So that refreshes you and gives you a little bit of new energy about the whole situation.”

This Saturday, the 30-year-old returns to the Octagon to face Andrew Holbrook in the UFC FIGHT PASS featured bout of the UFC 210 card in Buffalo. It’s just an hour away from where he grew up, but don’t expect that having friends and family cheering him on will distract him from the task at hand. Gillespie just isn’t built that way. He’s in town on business and whatever it takes to get that win, he’s going to do it. So don’t call him “just a wrestler.” 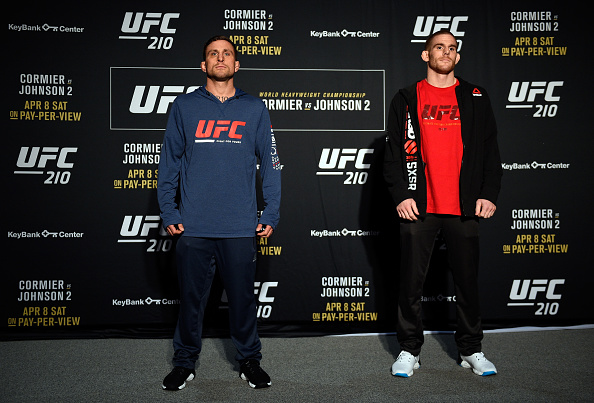 When he does get to wrestling, he’s one of the best. And he knows it.

“They have to get lucky every time I shoot,” he said. “I only have to get lucky one time. Because if I get the takedown, there’s a great chance that they’re not getting back up. And if they do get back up, I’m persistent enough and resilient enough that I’ll probably take you down again. And if I take you down, I’m active. I have several TKOs and several submissions, and I’m looking to finish fights.”

Sounds like the top guns at 155 pounds have someone to look out for in the coming years. And after doing his time waiting to get here, he’s not leaving anytime soon.

“I have a tattoo on my back that says, ‘Like Water to a Rock’ and I think that exemplifies my personality, my style, and my being,” Gillespie said. “I’ll wear you down, and it may not happen right away, but if you’re gonna have the pace I want for 15 minutes, or hopefully 25 minutes in the future, you’re gonna hate fighting me.”