Finally, it's Time to Fight for "Gasparzinho"

"For that being a reality show, I needed to put on a show. Now it's a different. It's a fight. I'm going to fight, I'm going to win." - Anistavio "Gasparzinho" Medeiros 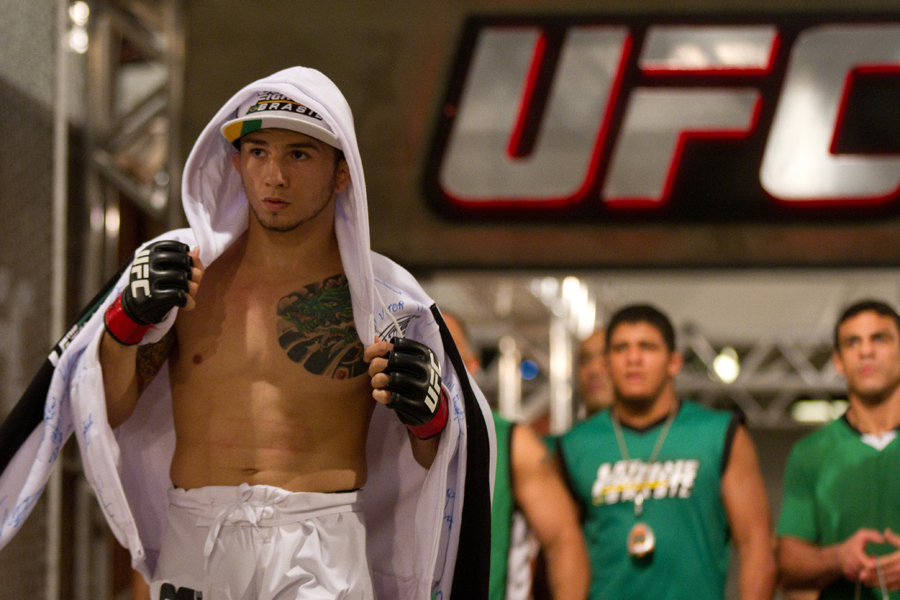 If you told Anistavio “Gasparzinho” Medeiros 10 years ago that he would be locked in a house for six weeks with 15 fighters, but would only have to train during that time while eating whatever he wanted and not worrying about anything, he would probably say that there could be nothing better than that. Today, as an engaged 24-year old with a child on the way, his attitude has changed a bit when recalling his time on the inaugural season of The Ultimate Fighter Brazil.

“It was way too hard, and surprising,” said Medeiros through translator Matheus Aquino. “I'm a guy that left home pretty early at 13 years old and lived alone for a long time. I learned to do stuff by myself; how to get my documents, work, learn about the city night life. So this thing of living alone wasn't very hard. But today I'm engaged, it's been five years I'm with my fiancée, who I just found out is pregnant, and I've got several friends who I'm attached to. I thought it would be easy, but I missed them a lot.”

Yet as he approaches his UFC debut this weekend against Rodrigo Damm, the native of Rio Grande do Norte, Brazil would probably say that the sacrifice was worth it, simply because now, the years of training and the 22 pro fights he has already accumulated have led him to a place where he can make something big happen for himself and his family.

“It means a change in my life,” he said of fighting in the UFC. “I’m able to showcase a little more of my work, of who I am fighting. I can show a little bit more of me to the Brazilian public.”

Not just the Brazilian public though. Through the wonders of television and the internet, TUF Brazil was aired around the world, and one of the most compelling athletes on the show was “Gasparzinho,” who entertained with his jokes and antics and captivated with the tales of his not always sunny upbringing. In the Octagon, he earned a spot in the house with a decision victory over Rafael Bueno, and though he lost in the quarterfinals to Rony “Jason” Mariano Bezerra, the tale of the two friends fighting each other sparked an intense showdown between coaches Wanderlei Silva and Vitor Belfort. In short, if there was “good TV” going on, Medeiros was likely to be involved, and the fans have responded to him in kind.

“I’ve received the best possible reaction,” he said. “A lot of people said I was the best guy on the house. Some said they'd tie me up (laughs). They said that although I lost, they liked my fights and what I did in the house.”

As for his own personal journey through the world of reality television, he said “I thought it was good, and I got to know several famous athletes. I got to know Serginho Moraes, who is a three-time BJJ champion, Vitor Belfort, Demian (Maia), Wanderlei, (Fabricio) Werdum, Babalu (Sobral). It was so many accomplished athletes and I got to know them all at once. The one I would have liked to know more was Serginho Moraes because he's a jiu-jitsu phenom and I come from jiu-jitsu. But I was able to learn a little more with him, get more experience.”

Already one of the more experienced members of the TUF Brazil cast, Medeiros began studying martial arts for a reason far removed from the usual quest for money or glory. As he described in his UFC bio, “I was the youngest of five brothers and I was tired of getting beat up. I wanted to learn how to defend myself.”

“They're very happy, but it's still kinda normal,” he said. “I'm not making success yet, I'm just starting.”

It’s a good start, one that comes after an up and down career that saw him turn pro in 2005 when he was just 17. In 2011, he began to hit his stride though, and with wins in four of five bouts leading up to TUF, he was showing his best form yet and expecting that one day, he would get the call to the big show.

“Of course,” he said. “Independent of wins and losses, which are part of our job, I always thought I'd one day become an UFC fighter.”

He certainly has the right attitude to make some noise in the featherweight division, and having finished all 15 of his wins, he is likely to be as crowd pleasing inside the Octagon as he is outside of it.

“It comes from Antonio Rodrigo Nogueira, Minotauro,” said “Gasparzinho” when asked about his finishing ability. “When I started training Jiu-Jitsu and started training MMA, the athlete that most inspired me was him. I watched all his fights and I think I was able to reproduce his style, something I didn't even expect.”

But what about “Gasparzinho?” Where did that unique nickname come from?

“When I started to train I was pretty small, I didn't have eyebrows, and was very white, so my friend Patricky Pitbull gave me this nickname,” he said. “It's Brazil's name for Casper The Friendly Ghost.”

So do you like “Gasparzinho” yet? Don’t worry, you will. But following six weeks under the camera lights, Medeiros is just happy to have things back to normal and to fight again. The rest is all just icing on the cake.

“In the house I did some different training, some things I wasn't used to and didn't like, and ways to lose weight that I'm not used to doing as well,” he said. “Then there was the participation inside the house with the cameramen and the athletes, and the doubts about if the guy I was talking to was the guy I would fight. But at Team Nogueira and Pitbull Brothers Team I'm doing what I have to, I'm focused, and I'm doing what I need to win. For that being a reality show, I needed to put on a show. Now it's a different. It's a fight. I'm going to fight, I'm going to win.”