"I’ve changed a lot. Now I am an experienced fighter, so I don't like to do the same mistakes I’ve done in the past." - Alessio Sakara 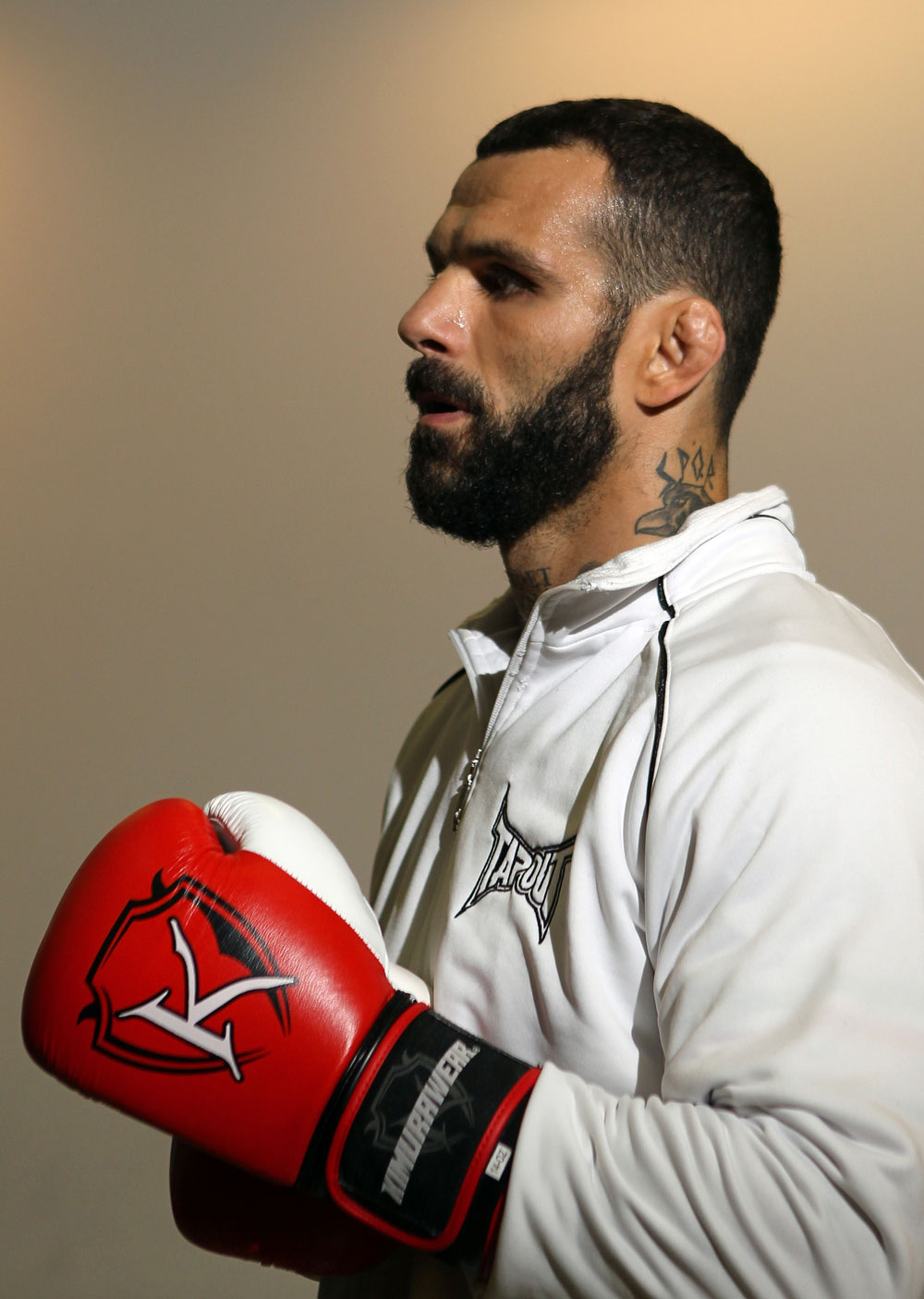 One look at Alessio Sakara, and you would be safe in assuming that he’s not pushing papers behind a desk for a living. Not that there’s anything wrong with that, but whether it’s the athletic build or the mosaic of tattoos that celebrate a world history of combat, it’s clear that the Italian middleweight is cut from a different cloth from most of us.

But looking the part of a fighter and living it are two different things, and while Sakara’s 28 pro mixed martial arts fights, nine pro boxing bouts, and 32 amateur boxing matches should spell out exactly where “Legionarius” is coming from, all it usually took was a conversation with him and the topic of the late Arturo Gatti for him to get a light in his eyes reserved only for those he truly respected and revered. Even now, Gatti is an influence for Sakara, who returns to the Octagon this Saturday against Brian Stann.

“His attitude was to never give up,” said Sakara of “Thunder,” through translator Samuele Sanna. “When he fought in the ring, it was always a war. He inspired me a lot.”

Early on in Sakara’s UFC career, the influence was obvious. Fast-handed and technically sound as a boxer, the Rome native dazzled when he was on top of his game, but when he got into firefights with heavy-handed 205ers like Drew McFedries and Houston Alexander, or ground battles with Dean Lister, things didn’t always work out in his favor.

But as the years went on, the rest of Sakara’s game began to catch up with his striking, and the results have seen him win three of his last four bouts, defeating wrestler Joe Vedepo, jiu-jitsu ace Thales Leites, and fellow striker James Irvin, with his only defeat a short notice decision loss to Chris Weidman last March.

“I’ve changed a lot,” said Sakara. “Now I am an experienced fighter, so I don't like to do the same mistakes I’ve done in the past.”

Winning three of four is the good news. The bad news is that those bouts took place in 2008, 2009, 2010, and 2011, as injuries and bad luck have limited him to one fight per year over the last four. That can be enough to weaken any athlete’s resolve, especially when that athlete is only 30 years old. But Sakara has looked to his support system to help him stay on the right track.

“I just stayed focused in my training,” he said of the last few years of his career. “A lot of people believe in me now, so my strength is my family, fans, and friends.”

And with a co-main event slot in his first bout in over a year, Sakara has landed on his feet. Now he just has to defeat Brian Stann to finally begin a move forward that will stick.

“Stann is a great fighter,” he said. “He’s a heavy hitter with a lot of strength and athletic ability, and these qualities are important, but I’ve trained so hard for him.”

Sakara, a black belt in Brazilian Jiu-Jitsu under Marcus “Conan” Silveira, may even try to turn the tables on the US Marine Corps veteran by taking what is expected to be a striking battle to the mat.

“I’m very good in the ground game, so if something happens, just watch me. I’m confident in my BJJ skills.”

He’s also happy to be back, but ‘happy’ doesn’t even cover the extent of his feelings when it comes to being healthy and back to active prizefighting duty. What may even add to this weekend’s excitement level is that this is his first fight in Europe since his knockout win over James Lee at UFC 80 in 2008.

“I’m very happy to fight near home and I know there is a lot of support from the fans,” said Sakara of fighting in Sweden. “The fans expect a great war and I’m sure it will be.”

The event will mark the latest step in the UFC’s European expansion, with Italy hopefully landing on the schedule sooner rather than later. For Sakara, fighting at home would be “a dream come true. I think Italian fans deserve it, and I’m proud to be there for my fans.”

Not only is Sakara a fan favorite at home, but when he’s not training with American Top Team in the United States, he’s doing his best to expose the sport to a new audience and let them know the positive aspects of MMA.

“Many watch now, but in the gym and in amateur contests there is still a lot of improvisation,” said Sakara. “Because of this I do seminars every weekend throughout the country to try to teach the right method of MMA, and we do a lot of charity programs to show that this is not violence, but a beautiful sport.”

And there’s no greater advertisement than to see a fighter from your country do well on the sport’s highest stage. Doing well isn’t the only goal for Alessio Sakara these days; he simply wants to fight…and fight…and fight some more.

“I worked a lot for this, and I want to prove to my fans that I’m a different fighter,” he said. “I want to fight a lot this year and I’m ready for anybody’s challenge, but I have a dream to fight Michael Bisping in Europe. I think that would be awesome.”