"I don’t know if I’m an idiot or I’m just really, really motivated, or
super stubborn, but with every time I’ve been knocked down, so to speak,
I’ve been able to say, it’s okay, I can do it." - Cub Swanson 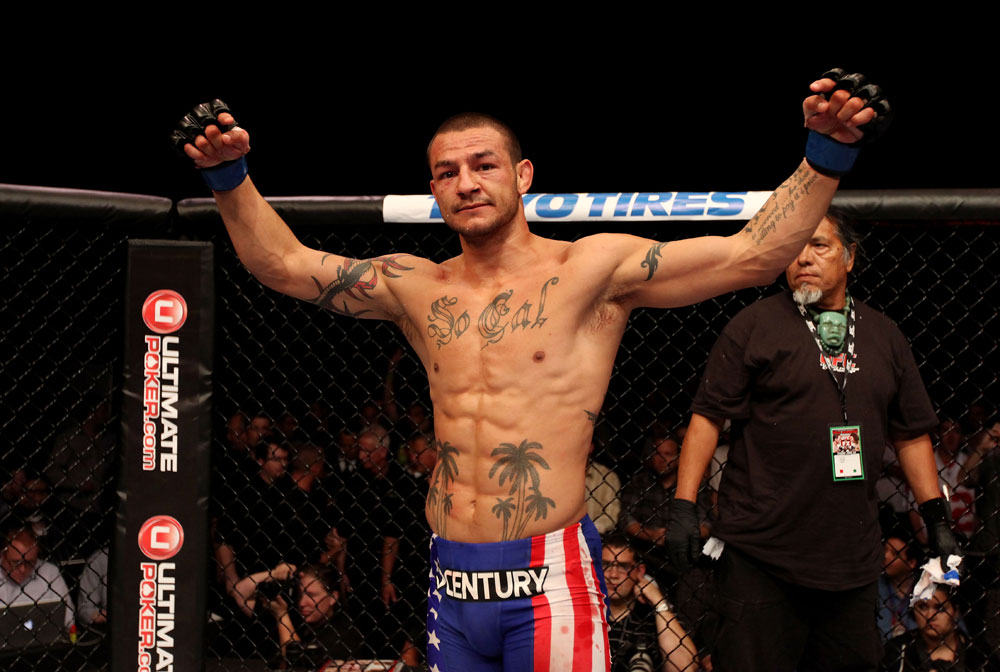 Despite what some people may tell you, adversity isn’t losing a fight. That’s just a notch on your record, an experience you should use to fuel you and help you get better. To many, losing is a gift. But adversity, that’s a different animal altogether. Adversity is getting your head split open in a fight, literally having your face broken in training, and watching your prime years slip away as you try to get healthy enough to compete.

That’s adversity. And when someone gets past that and succeeds, you can’t be impartial; you have to cheer for that person.

You have to cheer for Cub Swanson.

So as we enter the fall of 2012 and prepare for UFC 152 in Toronto this weekend, Swanson isn’t a fighter that could have been. He’s a fighter who is. Winner of two consecutive fights this year via knockout over George Roop and Ross Pearson, the 28-year-old from Palm Springs, California is on the verge of entering title contention at featherweight should he defeat Charles Oliveira on Saturday, and he’s finally starting to see his years of toil paying off.

“I don’t know if I’m an idiot or I’m just really, really motivated, or super stubborn, but with every time I’ve been knocked down, so to speak, I’ve been able to say, it’s okay, I can do it,” he said. “Even when people around me were more bummed than I was at certain things, and there were a couple times where you get down, I’ve always stayed positive and always told myself that I could do better, and that’s always been my mentality. And I’ve had good people around me.”

Those good people, both at home in California and in the Jackson’s MMA camp in Albuquerque, have always known what he could do if given a level playing field – not necessarily in the Octagon, but in life. He always seemed to be dealt a bad hand when it came to freak injuries and his body betraying him at crucial moments though. Yet the worst was watching the world go by as he sat on the sidelines.

“The hardest part is you see certain guys that when you’re in the WEC, those guys were just starting to fight, and they kinda look up to you, and then they make it to the UFC before you,” said Swanson, who fought just five times in two years in the WEC, and then sat out a year before his UFC debut against Ricardo Lamas in November of 2011. “And you’re kinda like ‘man, they’re in the UFC already and I still haven’t fought.’ That’s hard, and it’s hard to not feel like time’s passing you by, but I always felt that the road I’ve had to travel has been rough and it’s had its ups and downs, but when I get there, it’s going to be the peak of my career and I really feel like it can be with a belt. And if I’m standing there with that belt, it’s gonna mean so much more to me than it does to the average champion. And that’s my personality – I like to learn the hard way. It’s just me.”

Like it? Swanson must love the hard way, because he didn’t just take the road less traveled; he took the road no one was traveling. But he made it, and even during the hard times, he would do whatever it took to get to the gym and do something – anything – in order to get better.

“Through all my injuries, I always thought it was funny because I’ve been out for years with a fight here and there, but I’ve been in the gym that whole time trying to get better,” he said. “And I always thought to myself that one day this is gonna pay off and I’m gonna shine and people are gonna be like ‘where did this come from?’”

That was most definitely the case in June, when he put on a clinic of dynamic striking against always tough Ross Pearson, finishing off the former Ultimate Fighter winner in the second round and earning Knockout of the Night honors in the process. The victory put a smile on the face of one of his cornermen that night, former boxing contender Antonio Diaz, and when you heard that Swanson was working with the likes of former US Olympian Vicente Escobedo, rising star Omar Figueroa, and the man who beat Manny Pacquiao – world champion Tim Bradley, it wasn’t surprising that Swanson’s standup was drawing rave reviews.

“I go into the gym and I’ll work one punch for a week,” said Swanson of his boxing training in California. “(Coach) Joel Diaz, who is becoming pretty famous lately, will tell me ‘you’re doing this wrong,’ and I’ll work that one punch and then the footwork to go behind it. It’s been a lot of hard work, and then when I go out to Albuquerque, I use what I learned and I have to translate it to MMA and change the distance and figure it out, and that’s been a whole other thing. And then there’s the sparring. My regular sparring partners are Vicente Escobedo and Omar Figueroa, and any guy who comes into the boxing gym with 20 pro fights, they’re like ‘oh, you could spar Cub,’ (Laughs) because I’m always there. I’ve sparred guys that are on Friday Night Fights and Showtime all the time.”

And yes, boxing isn’t MMA, but working with world-class boxers has had a big effect on Swanson, and the proof is in his performances.

“Because they (boxers) only focus on that one aspect, they’re so good and so fast, and they make you pay for little mistakes,” he said. “I’m able to get so much out of that, and when I go and I spar good MMA fighters, I feel like my reaction time is just a little bit faster. It does take some adjusting every time to translate it into kickboxing with takedowns and do that whole side of it. But it’s something that excites me and keeps me coming back to the gym. Sometimes I’m just hitting the bag and I’ll watch Vicente and (former world champ) Julio Diaz spar, and I’m like man, these guys are bad ass. I’ve watched Tim Bradley spar, and I’m a fan of it. I’m a fan of all the different aspects of MMA – I’m a fan of judo, I’m a fan of wrestling, I’m a fan of boxing and jiu-jitsu. I’m a fan of all of it, and I’m able to see the different aspects and what it takes to make an MMA fighter and I feel like I’m a little bit more open-minded to say what works and what doesn’t and not what style.”

As soon as the bell rang against Pearson, the gap between the two 145-pounders in the striking realm was huge, and that’s saying a lot because the Brit is a solid standup fighter. But whether Swanson was pecking and probing, or shooting in with power shots from non-traditional angles, the fight got one-sided real fast.

“With Pearson in particular, I asked for that fight, and I go man, this kid’s tough, but I feel like I can beat him, I know I can,” said Swanson. “And the whole thing behind it was that I purposely didn’t put on too much weight after the weigh ins, I was very strict with myself, and I put on just enough weight to be content and have my power, but not be too heavy because I knew my footwork was going to be everything. And he’s a guy who marches forward, so I wanted to be able to pepper him in the face and kinda piss him off because he was going to do one of two things: just back up and then let me fire, which I didn’t think was going to happen, or what I really thought was gonna happen, which was him coming forward harder. And when he comes forward, he comes straightforward, and he’s a counterpuncher, so when I hit, he comes forward. So I wanted to hit and cut angles so he could never find his rhythm, and that’s what it was, and my rhythm was making him not find his rhythm.”

In the second, Swanson finished it, lifting him to 2-1 in the UFC and 17-5 overall. Now he’ll battle Oliveira in the UFC 152 Pay-Per-View opener. Oliveira is known for his ground game, but he can bang a little too. Swanson has a BJJ black belt, but striking has become his bread and butter. In short, this is some fight to get the main card off to a good start.

“He’s very dangerous,” said Swanson of Oliveira. “When he came into the UFC he was kind of a one trick pony, but very dangerous at that one thing. Now he’s really brought his Muay Thai along and he’s definitely becoming a dual threat. But I feel like I’ve done everything I need to do, I’m confident in my abilities, and I’m happy with this matchup.”

And what about opening the show?

“My last fight with Pearson, I was so excited just to hear Bruce Buffer say ‘we are live’ starting with my fight because I knew there were going to be fireworks, and I didn’t shy away from it at all,” he said. “I know that this one is gonna be even bigger. Something’s going to infect me when I’m in there, and when we’re in the cage and it’s me and him, I’m gonna bring it, and I’m not afraid of that – I’m excited.”

Why wouldn’t he be? It’s finally Cub Swanson’s time.