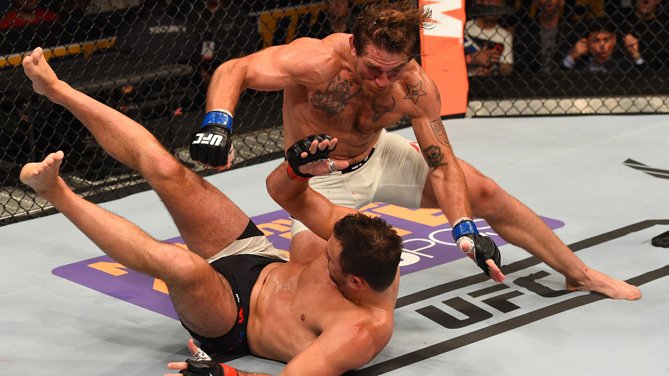 After a rough first round, comebacking "Filthy" Tom Lawlor erased everything in the second on Saturday at United Center in Chicago, knocking out Gian Villante in UFC Fight Night action in the light heavyweight division.

For the past seven years, everybody here at the UFC thinks I’m a joke,” Lawlor said. “Now, I’m stepping up in weight, and people still think I’m a joke. The joke’s on the 205-pound division now.”

Lawlor, sidelined by knee injuries for the last two-plus years, opted against using his wrestling or ground game in the first round, and that was just fine with Villante, who marked up his foe with punches upstairs and kicks to the lead leg. But just as round two opened, Lawlor drilled Villante with a flush right hook and the New Yorker dropped to the canvas as if he were shot. A couple sloppy ground strikes followed, but they weren’t even necessary, as referee Robert Madrigal moved in and stopped the fight. The official time was :27 of the second round.

"It's the filthiest punch you're ever gonna see," Lawlor said. 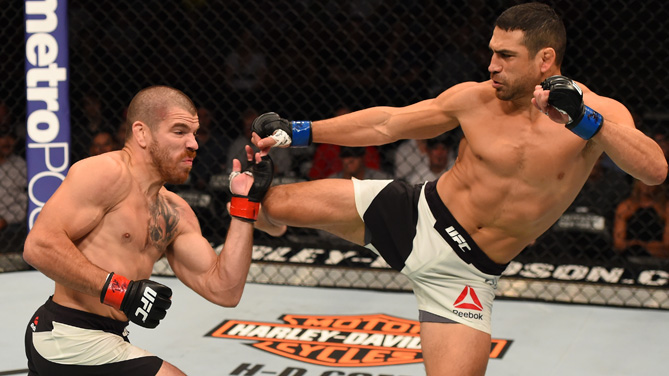 A Castillo high kick was caught by Miller in the opening minute of the fight, leading to a trip to the canvas. Miller was able to work his way into the mount, and as Castillo tried to escape, the New Jersey native nearly locked up a choke, but “Last Call” got loose and into his opponent’s guard. With a minute left, both fighters rose, neither able to pull into the lead before the horn.

The fight stayed standing in round two, the combatants keeping it close throughout, with Miller’s straight counters giving him a slight edge, but Castillo’s kicks were scoring as well.

With the stand-up battle continuing to be back-and-forth, some late ground control by Castillo during a scramble looked like it could be the difference on the cards for the Californian, but two of the three judges disagreed, awarding the ultra-close bout to Miller. 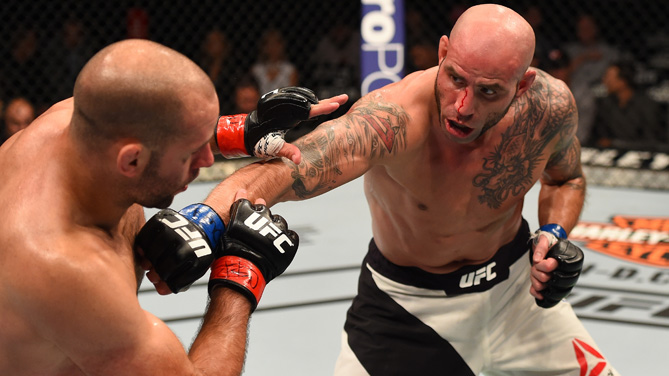 Ben Saunders won his third consecutive bout since returning to the UFC in 2014, but the welterweight veteran had to go through fire with Kenny Robertson to do so, winning a razor-thin split decision in a grueling three-rounder.

It was an action-packed opening round, Robertson swinging right hand haymakers throughout the first five minutes, while Saunders sought submissions on the mat and fired off punishing kicks to the body and arms. The biggest shot of the round came courtesy of Robertson though, as he dropped Saunders with a flush right hand in the final 30 seconds of the frame.

As both fighters slowed ever so slightly in round two, Robertson’s punches began to land more frequently, but Saunders kept his kicks and knees coming, thrilling the crowd for another five minutes.

Saunders looked like he was starting to pull away early in the third, but a takedown in the second minute by Robertson stopped the bleeding momentarily. Saunders stayed busy from the bottom though, cutting his foe with elbows as he sought a submission from his back, and that punishing finish wrapped up the win for “Killa B.” 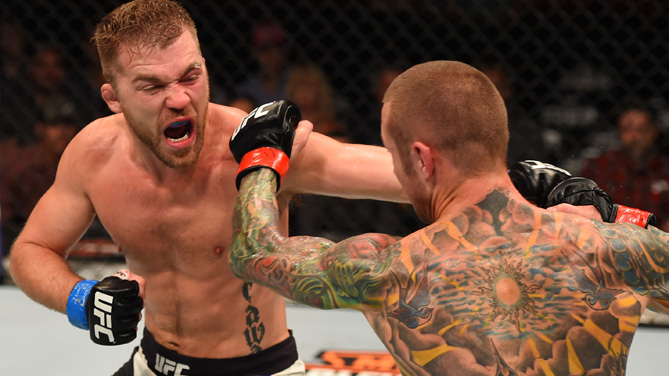 In a meeting of bantamweight contenders, the 12th-ranked fighter at 135 pounds, Bryan Caraway, put a halt to the comeback plans of number six Eddie Wineland, winning a three-round unanimous decision.

The veteran bantamweights engaged in a chess match in the opening round, Caraway holding the edge thanks to a takedown and some solid clinch work, as Wineland looked for – but wasn’t able to find – the power shots he wanted on the feet until a couple hard shots at the end of the round.

Caraway’s improving striking worked well for him in round two, as he bloodied Wineland and kept the former WEC champion from getting into a rhythm after 14 months on the sidelines. By the end of the round, Caraway was even calling for Wineland to exchange, more confident than ever on his feet.

Tearing out of the corner at the start of the final round, Caraway left Wineland with few answers on the feet, and even though he couldn’t get the fight to the mat, he did more than enough with his strikes to get through a late charge from the Indiana product and pick up the win.