If there’s anyone who seems built for the spotlight that comes along with a roster spot in the UFC, it’s Mike Perry. But as he gets ready for his Saturday bout against No. 10-ranked Santiago Ponzinibbio in Winnipeg, “Platinum” says adjusting to everything outside the Octagon is still a work in progress. 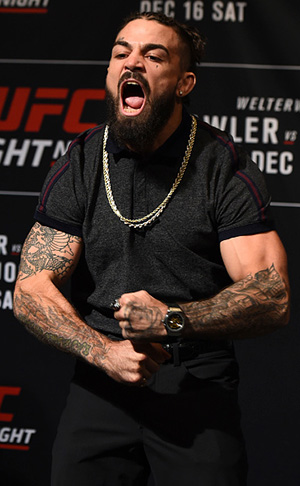 “I’m in the Octagon and that’s where I really shine because I’m best at fighting, not at talking,” he laughs.” The fighting, that’s the easy part, so I’m gonna keep knocking people out and then you can’t deny me.”

Knocking people out put Perry on the map, especially since four of those knockouts have come in the UFC. But as time has gone on since his debut in August 2016, fans that weren’t ready for the confident Floridian are now coming on board.

“People don’t know what they want, but I have seen the change,” he said. “I see comments on Twitter all the time, ‘Aw, I don’t know why I hated Mike Perry, this guy is gold.’ I come out here to fight and bleed and die for this and that’s all I ever cared about from a fighter. And those are the fighters I have on my top ten favorite list. That’s all I’m trying to do is just be the best fighter. I just want to entertain and put on a show. And if people didn’t get that in the beginning, whatever.”

If they didn’t get it then, they’ve got it now, and whether it’s the fact that the 26-year-old has no filter or that he can touch an opponent and make it an early night, there’s something about Perry that has made him must see TV. Maybe it’s the realization that while other athletes become fighters, he was seemingly born for this.

“I’ve been saying I belong at the top of the UFC or at the top of the pound-for-pound list before I even started fighting amateur,” Perry said. “I’ve always been this aggressive person inside and I got into fighting, got in trouble for fighting, and always trained martial arts whenever I had the chance. It was backyard boxing with friends in the neighborhood and people who weren’t friends in the neighborhood. I used to take challenges, give challenges, and I just loved to fight. You’d have to ask God what he put inside of me that I just enjoy this s**t.”

So a pro golfing career was out of the question?

RELATED: Perry looking for perfect 2017 | Road to the Octagon: Ponzinibbio vs Perry

“Don’t say that, I like golfing,” he laughs. “Me and my girl go out and we do 18 holes. I gotta get better first, but golfing is nice because you go out, you have a couple drinks, you ride the golf cart around like you’re crazy, and I live in Florida, so golfing is on point over there. You see beautiful scenery and you really get to enjoy your day.”

For most people, a day like that on the links is the reward for getting through a stressful day on the job, and there is no more stressful occupation than being a prizefighter facing off with an opponent trained to beat you. Not for Mike Perry, though. In his world, fighting is the escape, and if Ponzinnibbio wants to get in the trenches and go to war, he is more than willing to go there.

Since I’ve gotten to #Winnipeg people have been saying it’s not as cold around here as it usually is. Told y’all I was bringing #Heat
— Platinum Mike Perry (@PlatinumPerry) December 13, 2017

“I’m looking for it,” Perry said. “I want to see an opponent who can take it as much as they give it. I’m hoping neither one of us get flashed…or we do and we drop each other ten times apiece and the world can’t even believe what they just watched.”

As someone who makes a habit of ending fights early, Mike Perry saying that he wants one of those knock down, drag ‘em out brawls continues to mark him as a complex character continually throwing curveballs. I ask him where that attitude comes from.

“I grew up watching Dragon Ball Z and Goku was just trying to be the greatest fighter in the universe, and he challenged all the other greatest fighters,” he said. “It’s a kid’s mindset. It’s a young, fresh, ignorant mindset. Ignorance is bliss and I just want to fight in good fights or entertaining fights. Quick knockouts are entertaining too, but when you watch two guys hitting each other and they’re just taking it, and both clash and move forward in the middle, there’s nothing better than that. I had a little one with Danny Roberts, we went through with that, it made us both better and I’m looking to do it this weekend again if he can take it. I’m gonna hit him and if he can take it, then we’re in for a battle.”

Perry chuckles, as if already savoring the fight to come.