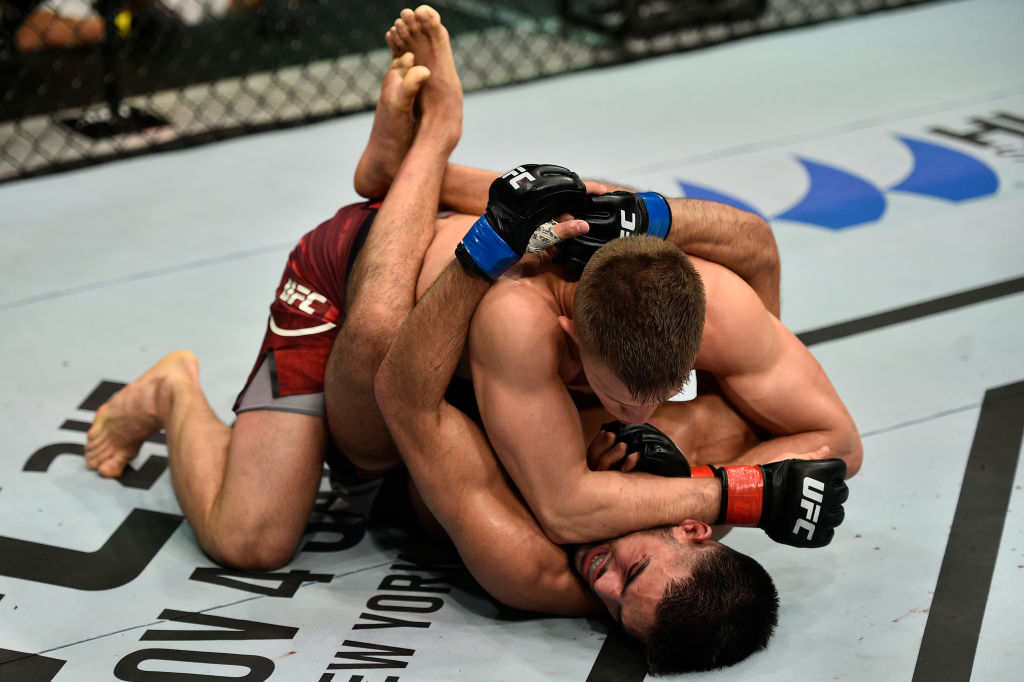 The fourth time was the charm for lightweight veteran Marcin Held, as he finally secured his first UFC victory at home in Poland, winning a three-round unanimous decision over newcomer Nasrat Haqparast at Ergo Arena in Gdansk.

Scores were 30-27 across the board for Held, who improves to 23-7. Hamburg’s Haqparast, who replaced the injured Teemu Packalen, falls to 8-2.

Haqparast got off to a good start, using his aggressive striking and good footwork to take an early lead. But midway through the round, Held began to implement his grappling attack, and with 1:20 left, he got the newcomer to the ground. Held wasn’t able to do much with the takedown, but he did keep Haqparast on his back until the horn.

A left hand by Haqparast put Held on the deck early in round two, and while the Tychy native got up quickly, a trio of takedown attempts came up empty. But in a subsequent scramble, Held nearly locked up his foe’s leg, and when that didn’t produce a finish, he transitioned into a takedown with the crowd chanting his name and, again, he kept Haqparast grounded for the rest of the frame.

Held got the fight right to the mat to begin round three and nearly locked on a heel hook. Haqparast got free, but Held maintained control from the top position. Midway through the round, Held went for the arm, but Haqparast pulled loose, got back to his feet, and he continued to throw all the hard shots his gas tank would allow for the rest of the bout.

Bantamweight Brian Kelleher lived up to his nickname, as he lowered the “Boom” on Poland’s Damian Stasiak, breaking open a close fight to win by a third-round stoppage.

Stasiak was on the attack from the start, and a kick to the body rattled Kelleher briefly. A follow-up takedown attempt came up empty and the respite allowed the New Yorker to get his offense in gear. Stasiak’s kicks continued to score points, but as the two engaged, Kelleher locked in a guillotine choke and brought the fight to the mat. Stasiak was able to escape, though, drawing a roar from the crowd.

The back and forth action continued into the second round, but it was Kelleher who made the biggest surge, bloodying the local favorite’s nose with a left hook before getting the fight back to the mat in the final minute.

Both fighters were intent on emptying their tanks in the final round, and it was one change of momentum after the other, as Kelleher took the lead only to see Stasiak retake it in the punishing battle. But with under a minute left, Kelleher dropped Stasiak hard to the mat with a right-left, and while the Lodz native tried for a takedown to clear his head, the series of unanswered strike prompted referee Piotr Michalak to stop the bout at 3:39 of the third. 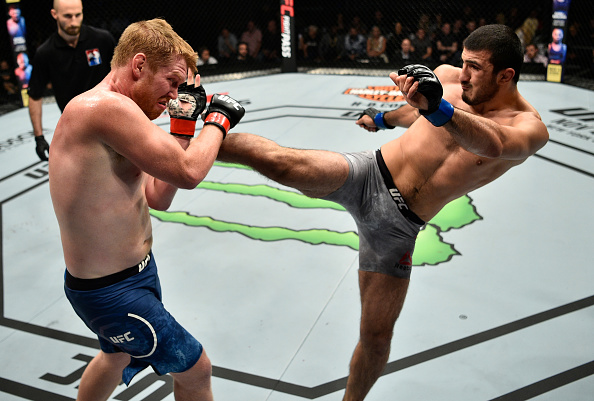 There was little significant action until the final minute, when Emeev got the bout to mat and then landed some hard strikes standing that briefly wobbled Alvey.

Alvey remained largely inactive in round two, and both fighters received a warning from referee Lukasz Bosacki about the lack of action. Emeev did fight in spurts, allowing him to pick up the frame.

The crowd got restless in the third frame, as neither fighter upped their work rate for a final charge, putting a fitting end to a forgettable bout.

With his teammate and UFC lightweight champion Conor McGregor cheering him on, Lobov stalked Fili from the start, but the Californian was able to use his reach and movement to stay a step ahead of his foe and bloody his face. Lobov began using kicks to slow Fili down, but it was a kick to the head by Fili that dropped the Russian hard just before the horn sounded.

Fully recovered from the knockdown, Lobov continued stalking Fili in round two, and he had a lot of success with his punches and kicks, but with under two minutes left, a takedown by Fili slowed his opponent’s momentum, even though he wasn’t able to get much of his own due to a quick stoppage by referee Marc Goddard to warn McGregor to take his seat.

Fili opened the final round with another takedown, continuing to show off all aspects of his game when it mattered.  Lobov was able to get upright fairly quickly, but he was grounded again moments later. This time, Fili briefly looked for an arm triangle before settling for some ground strikes, and while Lobov rose again, two more takedowns followed, extending Fili’s lead on the scorecards and cementing his victory. 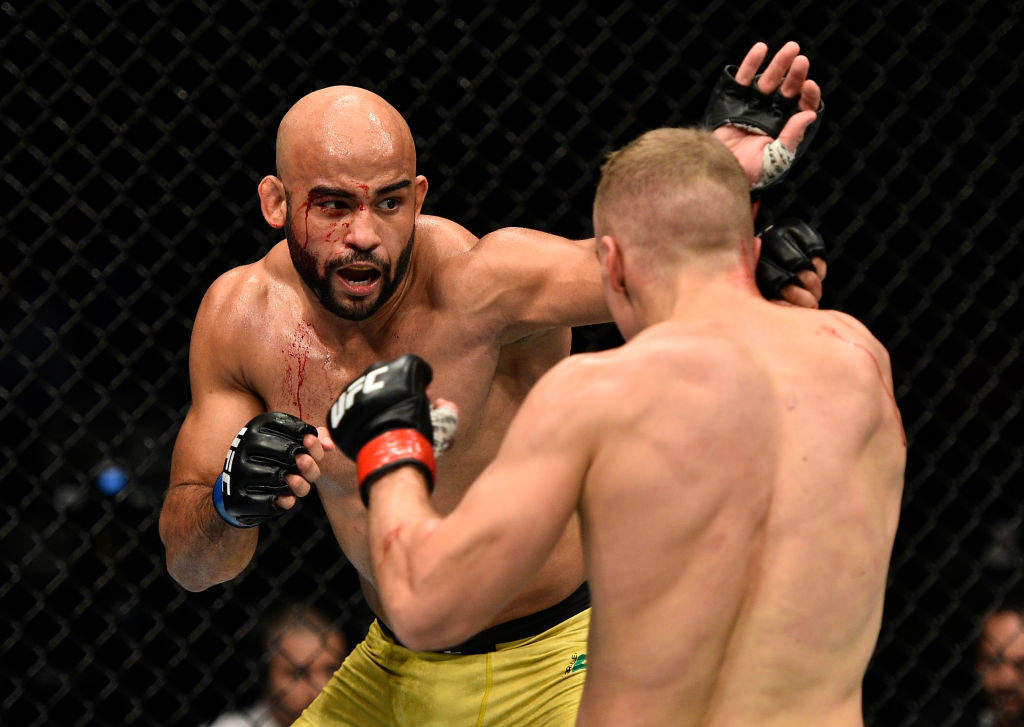 It was a disciplined performance from former TUF Brazil winner Warlley Alves, as he scored a three round unanimous decision over late notice newcomer Salim Touahri in welterweight action.

Touahri had his moments in the first round of his UFC career, but the frame still belonged to Alves, who mixed things up nicely between grappling and striking.

Alves got cut over the eye from a clash of heads early in round two, but he maintained a measured pace as he continued to control the fight throughout the second and third frames. It wasn’t the explosive Alves UFC fans usually expect, but it was the fight he needed to snap a two-fight losing streak.

Ladd closed the distance immediately and pinned Lansberg to the fence, but the “Elbow Queen” was able to reverse position and get several strikes off at close range as she largely controlled the rest of the round.

Opening round two with a takedown, Ladd worked hard to get into the mount position, and with 3:15 left, she got it. Lansberg was able to improve her position briefly, but then a barrage of punches came out of nowhere and prompted referee Lukasz Bosacki to intervene and stop the fight. The official time was 2:33 of the second round. 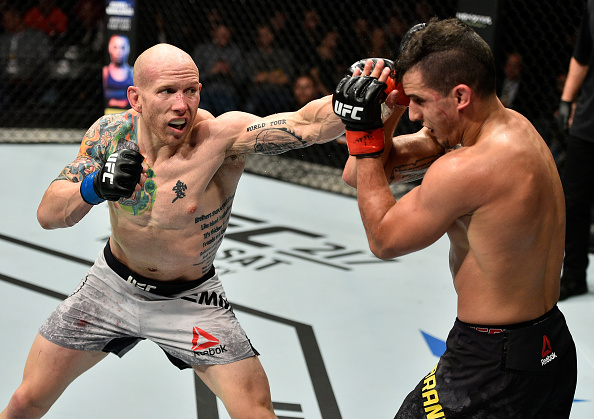 In his first UFC fight at featherweight, Josh Emmett scored multiple knockdowns in the first round and never looked back en route to a unanimous decision win over Sao Paulo veteran Felipe Arantes.

Emmett scored a flash knockdown in the opening minute, but Arantes recovered immediately and rose back to his feet. A second knockdown moments later seemed to have more of an effect on the Brazilian, but after drawing Emmett into some groundfighting, the Californian opted to go back to the feet. A third knockdown followed, and while Arantes rose once more and traded with his foe, he was unable to stay upright, as a fourth trip to the mat was the result. Remarkably though, Arantes got back up and made it out of the round.

Arantes bounced back well in the second round as Emmett’s pace dipped, but a late takedown followed by some ground-and-pound put the Californian back in business heading into the final frame.

Both fighters came out firing to begin round three, but it was Emmett who surged ahead once more to secure the round and a big victory in his first UFC foray into the 145-pound weight class.