Fili determined not only to thrive in chaos, but enjoy it 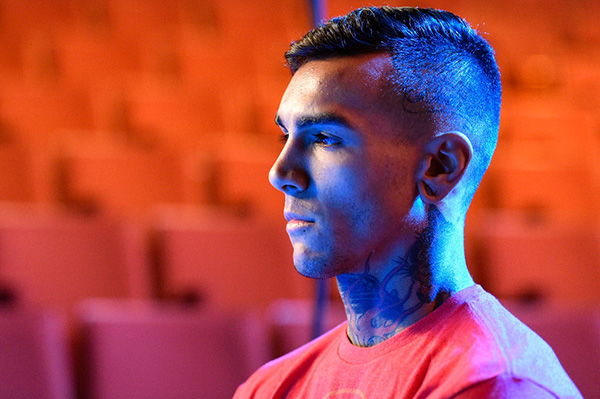 Andre Fili waits backstage during the UFC 214 weigh-in inside the Honda Center on July 28, 2017 in Anaheim, CA (Photo by Mike Roach/Zuffa LLC)" align="center" />If the pattern of Andre Fili’s UFC career holds true, the California featherweight is going to have a good night on Saturday against Artem Lobov.

Fili laughs, well aware that after going win-loss-win-loss over his first eight fights in the Octagon, he’s due for a win, but he also doesn’t this pattern to become the story of his career in the big show.

“It’s a pattern I would like to continue for this fight and then break for the next one,” he said, ready to stop being inconsistent and start getting back to the winning streak he put together on the regional circuit that got him called to the UFC back in 2013. And as far as he’s concerned, the key is not being concerned. Better let him explain.

“It wasn’t difficult for me for a long time (to be consistent), and then it’s been a rough patch these past couple of years where I’ve been inconsistent,” he said. “For a while it bothered me. Now it doesn’t bother me as much. I really started refocusing on myself and started enjoying fighting again and taking it as it comes.”

Fili believes the problem goes back to those early UFC days, where fighting became more than just something he enjoyed. It became the way he made his living.

RELATED: Gdansk Fantasy Cheat Sheet | Cerrone - Till Needs A Reality Check| Darren Till - On The Fly

“This is all I ever wanted, all I’ve been good at, all I’ve ever done,” he said. “I like comics, I like music, I like other things, but fighting is really the only thing I’ve ever been passionate about. I have over a decade in the game already. That’s a long time to do something, and it turned into work, it turned into a job, and that’s something I never wanted it to be. You start clocking in, you put in your eight-hour shift and do what you need to do because you’re supposed to do it, not because you want to do it. It’s the outlook of whether you have to do something or get to do something.”

You could almost see it in his face in recent fights. The happy-go-lucky kid from Sacramento wasn’t there anymore. Sure, he would follow up crushing losses like those to Godofredo Pepey and Yair Rodriguez with a highlight reel win over Gabriel Benitez and a late-notice upset of Hacran Dias, but the fun seemed to be gone. And he knew it. So he fixed it. 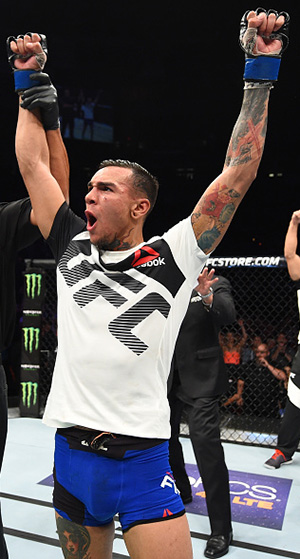 UFC Fight Night event at the Moda Center on October 1, 2016 in Portland, Oregon. (Photo by Josh Hedges/Zuffa LLC)" align="right" />“I’ve changed around some things and gone back to some things along the way, and I’m excited for that,” he said. “I’m resigned to the fact that this sport is mostly chaos and you’ve got to take it as it comes. And I thrive in that chaos. So instead of trying to find some order or some pattern to make sense of it, I’m just going to flow with how chaotic everything is and just enjoy it. That’s what I used to do and that’s what I’m going to get back to doing.”

And along the way, he’s got plenty of good friends and mentors from his Team Alpha Male squad to help him. They’ve seen it all – the good, the bad and the ugly – in this sport, and being around them has helped Fili keep everything in perspective.

“It’s invaluable to have those guys around me,” he said. “They’re like family to me, but they’re also tested veterans of the sport. And something about our team that you don’t find everywhere else is that none of them are ‘Yes’ men. They’ll call me on my bulls**t, and I’ve got plenty of it. (Laughs) I’ve got all these bad habits and baggage from growing up and all this other bulls**t, like we all do, and they’ll call you on it. (Coach) Danny (Castillo) will be the first guy to tell me to get my head out of my ass.”

It all sounds like a plan for Fili, who will attempt to rebound from a July loss to Calvin Kattar, but is it just talk? No, you can hear it in his voice that he’s looking forward to a fresh start and a long, successful career in this game. Yeah, he’s got the love back.

“I was 13-1 after my first UFC win and now I’m 16-5, and it’s a frustrating thing to see the numbers on the other side of the record go up,” he admits. “So many things were going on, and at this point in my life, I’m just happy to be doing it again. I’m enjoying it, I get to go Poland with a bunch of my good friends and I get to go on this trip that some people would kill for. So it feels good to get to do this.”