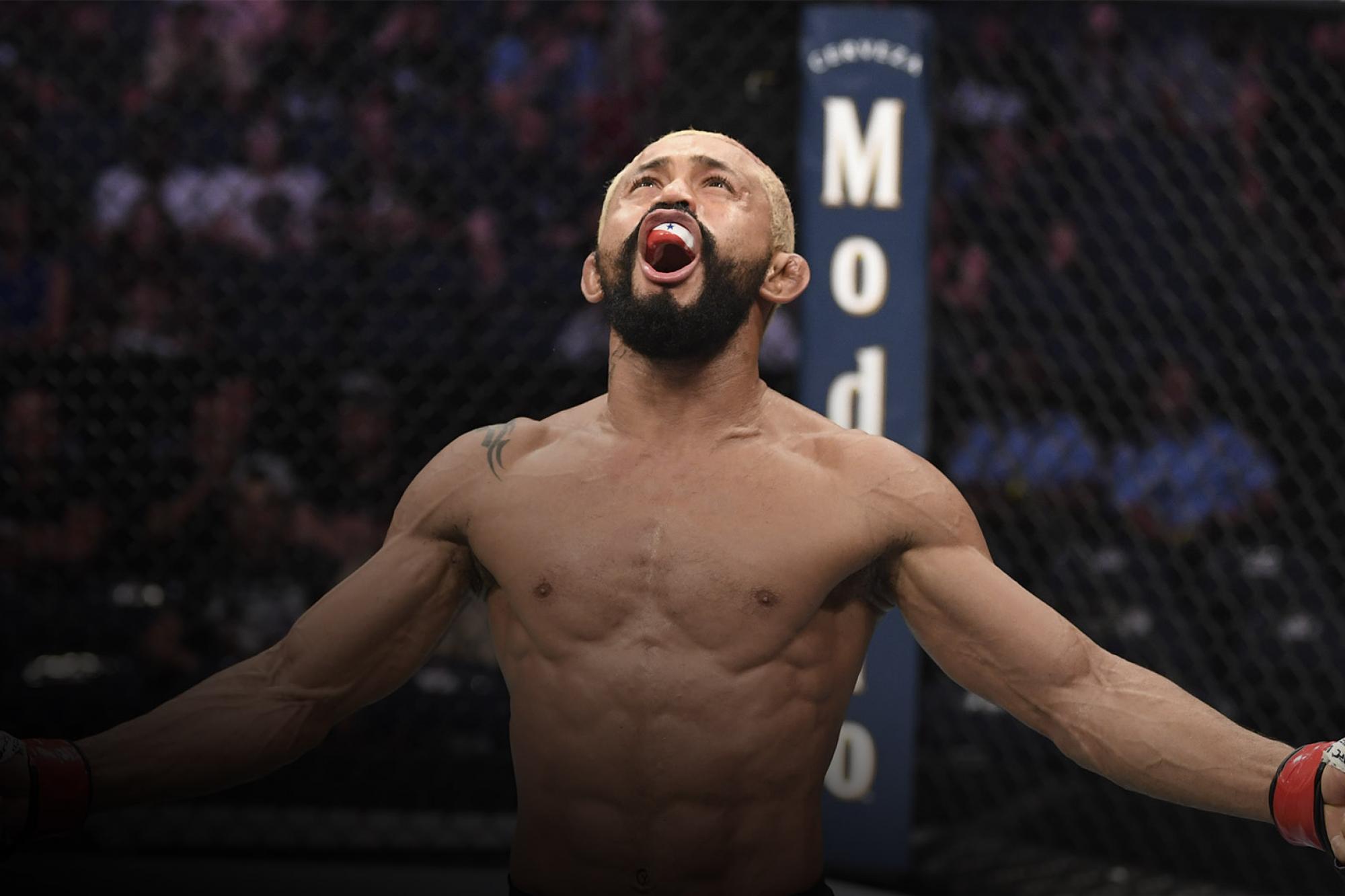 Figueiredo Eager To Prove Anyone Can Make It

“I want to make everybody in the city, the country, and the world proud,” he added. “If a guy from a farm in the north of the country can make it, anybody can make it.”
By E. Spencer Kyte, on Twitter @SpencerKyte • Feb. 27, 2020

Saturday night in Norfolk, Virginia, thousands of miles away from his hometown of Soure in the Brazilian state of Para, Deiveson Figueiredo will walk to the Octagon to face Joseph Benavidez for the UFC flyweight title.

Less than four years after making his first trek into the famed cage, the 32-year-old has amassed a 6-1 record in mixed martial arts’ largest promotion, pushing his record to a sterling 17-1 overall. Since suffering the first loss of his career last March to fellow Brazilian Jussier Formiga, Figueiredo has delivered a pair of stellar performances, outworking countryman Alexandre Pantoja in a Fight of the Night-winning scrap at UFC 240 last summer before swiftly submitting former title challenger Tim Elliott a little less than three months later.

“I was very happy, because I know I deserve this fight,” Figueiredo said through a translator when asked about his reaction to being booked to face Benavidez for the vacant flyweight strap this weekend. “I’ve knocked out or submitted almost everyone (I’ve faced) and I was ready for my call.

“I was campaigning for this fight because I know (Henry) Cejudo cannot make 125 pounds and I’m ready,” continued the confident Brazilian, who had previously been linked to a bout with the man he’ll face this weekend, though the fight never materialized. “I had personal problems with Benavidez and now it’s time to settle those problems. He talked s*** about me, and now it’s time to settle it.”

A fixture in the division since its inception nine years ago, the 35-year-old Benavidez has fought for the flyweight belt twice before, falling to Demetrious Johnson on both occasions. Those two bouts happened in the span of 15 months during the weight class’ first two years of existence, and since then, the veteran contender has posted nine victories in 10 fights, dispatching a host of consistently ranked opponents and former title challengers, while adding a split decision win over Cejudo, who relinquished the belt in order to focus on defending his bantamweight title.

In his last appearance, Benavidez scored a second-round stoppage victory over Formiga, marking the second time he’d finished the highly regarded grappler, further cementing his place as the top remaining talent in the division.

Despite there being some animosity between the two — at least as far as Figueiredo sees it — the talented “Deus da Guerra” is quick to acknowledge he has the utmost respect for Benavidez, although he’s still forecasting a memorable finish this weekend.

“I have a lot of respect for Benavidez — he’s really good — but I know I’m going to knock him out because I had the best camp of my life,” said Figueiredo, who has started tailoring his training camps more like professional boxers do, bringing in coaches and sparring partners to focus on him throughout camp after previously training with the Marajo Brothers.

“Everybody was focused on me and that’s been very important. Everybody has invested in me, in my gym, and it means I’m in the best shape of my life. My weight is down and I feel amazing. I’m better prepared for this fight than any other fight I’ve had in my life.

“I’m much smarter; I learned a lot when I lost,” he added. “You can see in my two fights after that, I was much more focused because I never thought that I could be beaten. I didn’t train well, but after I lost, I trained much better and much smarter. I’ve become a real professional and a completely different fighter over the last year.”

Intensely focused whenever he steps into the cage, Figueiredo fights with coiled aggression, marching forward tightly wound, always ready to uncork the kind of quick, powerful punches that felled Marco Beltran, Joseph Morales and John Moraga as he began his climb up the flyweight ladder.

There is a ferocity to him — a look in his eyes that mirrors that of a hungry jungle cat tracking down its prey — and a drive that is different than many of his contemporaries.

Because fighting in the UFC and competing for championship gold this weekend isn’t just an opportunity to cross a major achievement off his professional “bucket list,” but rather a chance to impact the lives of his family while making a global statement about perseverance and hard work, as well as the importance of inclusion and representation.

“I’m fighting for my family, my kids,” began Figueiredo, the sharpness that flecked his voice when he spoke about Benavidez and the fight itself replaced by a calmer, more emotional tone. “I’m hungry and when you fight for your family, you’re a giant.

“This is going to show the world how important MMA is and the UFC is for inclusion. People need to understand I grew up on a farm on an island, not in the city of Soure. I grew up on a small farm until I was 12 years old.

“I want to make everybody in the city, the country, and the world proud,” he added. “If a guy from a farm in the north of the country can make it, anybody can make it.”

Asked how it will feel to make his dream a reality and have the flyweight title wrapped around his waist this weekend, Figueiredo paused for a moment to find the right words before answering.

“It will be an explosion of happiness on Saturday,” he said. “I have nothing but respect for him, but I’m so focused on this fight and breaking him; I just want to knock him out or submit him.”