Fighting's Not Easy, but Mark Bocek Does It Anyway

"I don’t know what the future has, but I have a good feeling about this next fight." - Mark Bocek 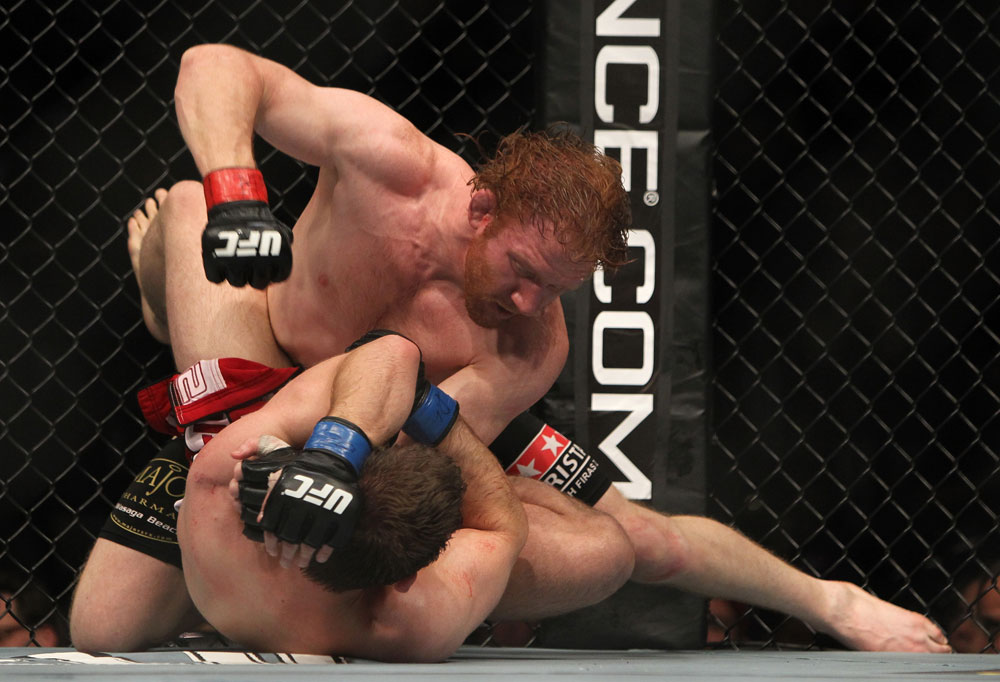 Bocekian? Consider it the new term for going above and beyond the call of duty in order to take yourself to the next step in your chosen profession. It’s named after UFC lightweight Mark Bocek, whose training camps with American Top Team in Florida were preceded by trips south from his native Ontario with his fiancé Mary.

Simple enough, right? Many fighters travel to training camp. They don’t drive for three days though.

“I wanted to have my car down there and I didn’t want to pay for a rental so I drove down like four or five times,” said Bocek, before adding, “and that was crazy. I will never do that again in my life.”

He can laugh about it now, as he now trains at Montreal’s Tristar Gym, a more manageable five hour drive (four and a half by train), but back then, pursuing top-notch training with ATT was anything but a process to joke about.

“If I’m not driving 12 hours a day, that’s a four day drive,” said Bocek of his road trips in “an old Eclipse.” “It was rough. It’s not even an SUV, so you’re getting some serious back pain after that.”

But he did it, all the while continuing to build a UFC resume that started in July of 2007 and that has him currently sporting a 6-4 Octagon record. It’s not an easy life, and not one he’s exactly recruiting family members into. So when you ask for the reaction he gets when he discloses the literal lengths he’s gone to in order to train, he chuckles.

“I guess I just wouldn’t tell them,” said Bocek. “Most people think we’re crazy, but most people think you’re crazy for what you do anyway. This is a crazy sport and I think it’s the toughest sport in the world. So I don’t start telling my nephews or little cousins ‘yeah, I want you to be a fighter when you’re older, and this is awesome.’ I’ve been training from a very young age, and I’ve known what I wanted from a very young age, but in the end, people see 15 minutes on TV and they have no idea what goes into this. I don’t tell everyone ‘yeah, you should be a fighter,’ but everyone wants to be a fighter or thinks they want to be a fighter. But they don’t really know.”

This Saturday night, he’ll look to win his seventh UFC bout when he takes on returning John Alessio, and even though his fellow Canadian is a late replacement for the injured Matt Wiman, there’s no question that Bocek will be prepared for the bout given the folks he’s been spending his days with in Montreal. And if you thought his road adventures were stressful, you ain’t heard nothin’ yet.

“You wake up every morning and go to a gym where there’s ten bad dudes trying to KO you, it’s not that much fun,” said Bocek. “It’s pretty scary. You get in there and you rotate sparring rounds between Rory MacDonald and Nordine Taleb constantly, when I get into the cage, there’s always a chance anyone can get touched on the chin and KOed, but aside from that, I’ll be ready.”

A black belt in Brazilian Jiu-Jitsu and Kempo Karate, Bocek has been training since his teen years and fighting professionally since 2004. Yet despite all his experience, what keeps him sharp before the actual battle are the butterflies that hit his stomach when he gets ready to spar.

“Sometimes it’s just like the first time,” he said. “Sometimes you don’t really want to do it because your body’s sore from the previous day and you haven’t really fully recovered, but I think in order to peak properly and recover that last week, week and a half out prior to your fight, up to that point, you’ve got to train like an engine.”

And while the engine in his Eclipse may be gasping for air, the 30-year old Bocek’s fighting engine is fresh and getting fine tuned by Zahabi and company, and the union has been a fruitful one for Bocek, who just finished up his second full camp at Tristar.

“After sitting down with Firas and talking with him and going out there and training with the guys, I liked his approach to mixed martial arts and strategies for MMA for a jiu-jitsu guy like myself,” he said. “I like that everything was specific, nothing was the same for every individual, and every athlete was looked at closely with a specific gameplan. And there’s a lot of good training within my weight class and also in the next weight class above me. So even though things can tend to be weird or awkward when you’re training with and competing with someone within your own weight class, you know you’re never gonna face a welterweight or a featherweight, so I can get a really good push in training either way and we’ve got (strength and conditioning coach Jonathan) Chaimberg out here, who’s top notch as well, so it was a really good fit and I’m really enjoying it.”

Winner of three of his last four, Bocek appears to have gotten on a roll in the Octagon, and considering that his only loss in that stretch was a competitive decision loss to current lightweight champion Benson Henderson in April of 2011, a victory over Alessio could move him ever closer into the crowded title race. But the Toronto native refuses to look past April 21st.

“Definitely not, because that’s kinda the attitude I had when I fought Benson,” he admits. “I was kinda looking past him, I was coming off a good win against (Dustin) Hazelett, he was coming off that loss to (Anthony) Pettis, and at the time, I overlooked him a little bit, and look where he is right now. It was a very big mistake. So right now, it’s just this fight. You know how it is; a good win throws you right back in the mix, rankings change from event to event and they don’t really mean much. But I’m really focused on this fight right now.”

Bocek won’t even take solace in the fact that he gave the debuting former WEC champ a tough go in Henderson’s UFC debut. He only looks at what he could have done to turn the tables.

“I would have liked to had not fought so much as a jiu-jitsu guy in that fight and maybe not be as desperate for the takedowns,” said Bocek of the Henderson bout. “I felt okay in that first round. I feel I won the first round and lost two and three. He clearly won the fight, but one guy wins, one guy loses, and the main thing is to learn and keep getting better. I lost many times in jiu-jitsu and came back.”

And he’s come back from his MMA losses stronger than he was before he suffered them. That’s the key in this toughest of sports. You take the hits, shake them off, and move forward. It’s not easy, but nothing worth being good at is. And that just may be why this lightweight fighter keeps giving a Bocekian effort every day.

“I enjoy this,” said Bocek. “It’s not always a pure passion; it’s a mix between passion and a job. I like competing, I like getting my arm raised, and nothing matches that feeling. I’ve been competing since I was a kid, it’s turned into my job now, and I definitely enjoy it, but it’s not something you can do forever, so I just want to keep fighting intelligently and do it as long as I can. I’ve never done it to keep coming in second place. Yeah, I have my losses, but I’m trying to learn and improve those weak areas and we’ll see how it goes. I don’t know what the future has, but I have a good feeling about this next fight.”