"I don’t feel old. I still feel like I did in my first UFC fight and I keep plugging away." - Yves Edwards 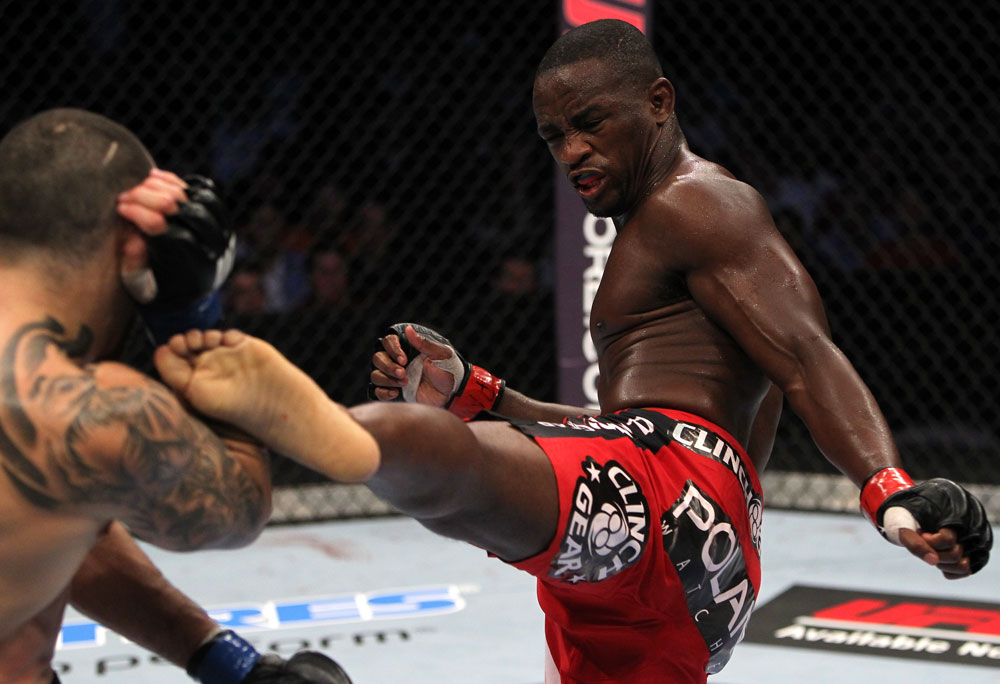 At 35, UFC lightweight Yves Edwards can’t be considered “old,” but when you’ve been fighting professionally for more than 14 years, you do get subtle reminders here and there about just how long you’ve been around.

Recently, the veteran got a jolt when arranging a flight for one of his training partners, Bubba Jenkins, to go out to Austin for some pre-training camp workouts.

“I asked him for his birth date, he said 1988, and I was like ‘holy crap, I’m 13 years older than this kid,’” laughed Edwards, who also saw his opponent on this Saturday’s Ultimate Fighter 14 finale card, Tony Ferguson, respectfully note that he was in high school when the creator of “Thug-Jitsu” was making his Octagon debut.

“A few years ago, that might have made me feel old, but I’ve heard it so much lately,” Said Edwards. “I work out with so many guys that were in high school when I was fighting, and that’s the way it is now. But I don’t feel old. I still feel like I did in my first UFC fight and I keep plugging away. But when people say ‘man, I used to watch this guy when I was in high school,’ I think at this point, I guess I take it as a compliment that I’m still around.”

Edwards is more than just “around” though. Winner of four of his last five (three in the UFC), with the only loss coming by way of a perfect left hook from Sam Stout at UFC 131 in June, the Texas standout is on the right track to introducing himself to new fans and reminding the old ones just why he was considered one of the top 155-pounders in the world back when the UFC had the lightweight division on hiatus. And with a win over TUF13 winner Ferguson on national TV this weekend, he can also erase the last image many had of him, losing to Stout.

“There’s an old saying that you’re only as good as your last fight, but I think, with the way the world works, and how visible things are now, you’re only as good as the last fight people have seen you in,” said Edwards, who bounced back from the Stout defeat with an impressive second round TKO of Rafaello Oliveira in October. “So the fact that some people haven’t seen my fight with Oliveira, even though they know the result, the last thing seared into their brain is me and Stout.”

That’s the power of TV, and it’s been the curse for Edwards and the many fighters who came up with him in late 90’s and early part of the new Millennium. There weren’t fights on TV nearly every weekend back then, and certainly none on basic cable or now on the FOX network, so reputations were spread by word of mouth, with the most intrepid of fans hunting down VHS tapes or early DVD versions of fights like Edwards’ two classics with Aaron Riley (who ironically was Ferguson’s last Octagon victim). So there’s a whole new education process when it comes to reintroducing the vets, but what they may lack in exposure, they make up for with experience, savvy and talent when the bell rings. And luckily, Edwards is able to mix up old and new at the American Top Team gym in Coconut Creek, Florida.

“At ATT, we’ve got a lot of veterans – myself, Thiago Alves, Mike Brown – and you get a lot of young guys like Bubba Jenkins, and Mirsad (Bektic) and Anton Kuivanen, so it’s like a tradeoff,” he explains. “The old guys bring their experience, their tricks of the trade and everything they’ve done for years and the things they’ve had success with to the room, and the young guys bring that energy and that wide-eyed innocence, and it all comes together and meshes and makes this delicious fight ratatouille thing.”

Being in an era where top-level athletes can stay on top a lot longer than they used to benefits Edwards as well, and by staying disciplined, eating right, and living a clean lifestyle, he’s been able to beat younger opponents like Oliveira (29), Cody McKenzie (23), and John Gunderson (32).

“Things are changing,” he said. “They say 40 is the new 30, or something like that, and I don’t necessarily agree with that – I think 40 is 40 (Laughs). But I think the way the world is now, people are competitive longer, people are healthy longer, and with better food, better medicine, and better things like that, guys are able to compete at a higher level for a longer amount of time. You get guys like Junior Seau, who just recently retired, and they say you can’t play 14-15 years in the NFL, but he did. And it has to do with how well you take care of yourself, the people you surround yourself with, and the way you train. You have to find that middle ground where you’re pushing yourself constantly and constantly improving, but at the same time, you’re not breaking your body down and putting yourself in harm’s way.”

In boxing, 40-somethings Bernard Hopkins and Glen Johnson have been fighting at a world-class level far beyond what used to be the standard combat sports retirement age. Dan Henderson is currently doing the same thing in the UFC, and we all know what Hall of Famer Randy Couture was able to pull off in the Octagon. Yet it’s more than just eating and training right. When you’ve been fighting and competing for much of your adult life, you learn subtle things that younger athletes just can’t pick up until they’ve been through the wars. And in a tough fight, sometimes guile makes up for youthful energy and athletic prowess.

“That’s where experience comes into play,” said Edwards. “When you do something so many times, over and over again, the little subtleties of it become things that you use to your advantage, but you also take for granted because you don’t think about them. Subconsciously you know those little details and know how to work around them or work with them.”

At the same time, Edwards (41-17-1) knows that he can’t rely on experience alone, because with many young fighters coming up learning MMA from Day One and others coming into the sport with years of experience in other disciplines, it’s always going to be a race in which you’re trying to stay one step ahead of the competition.

“That experience gap is smaller now because you have these guys that are coming in from college wrestling and that have had 120 matches throughout college,” he said. “Although they haven’t been punched in the face or kicked in the head, they’ve been in combat and competition, and they know the feeling. So I definitely think that those things help, but the gaps are smaller now.”

And getting punched in the face always equalizes things.

“That changes everything,” laughs Edwards, who has done that whole punching in the face thing better than most in his profession over the last 14-plus years. He’s not finished yet either. In fact, the only goal at this point isn’t to be a gatekeeper for the next generation, but to be the man at the top they’re all gunning for.