As Journey Newson approaches his second UFC fight, he's out to prove he belongs.
By Thomas Gerbasi, on Twitter @tgerbasi • Feb. 4, 2020

Warning: It’s okay to go up and say hello to UFC bantamweight Journey Newson if you see him this week before his bout against Domingo Pilarte.

“I have ‘resting bitch face’ constantly,” Newson laughs. “But I try to smile when I’m walking up to people to let them know that it’s okay to approach me and I’m not a hard ass or anything.”

That even goes for Pilarte and the other four bantamweights competing on the UFC 247 card in Houston.

“I always try to be nice,” he said. “Some guys are pretty nice, some show off that mean mug, but I’m usually pretty nice to guys. In the cage, there are no smiles. This is the job and we’re getting paid for this and we’re not friends at this point. But outside of it, it’s nice to talk to people.”

It’s also nice to be Journey Newson these days, as the 30-year-old from Portland has made it to the point in his career where he doesn’t have to work a day job as a truck driver to make ends meet anymore.

“I’m just getting used to it,” said Newson, who put his job behind as soon as he got the call from the UFC for a short-notice fight against Ricardo Ramos last summer. “It was a lot of toll on my body at first, but my body’s used to it now.”

Now two or three a day practices replace long hours on the road that saw him getting up by 3:30 or 4am. Now he gets up at a leisurely 6am (note sarcasm) and the focus isn’t on someone else’s business, but his own.

“I’m on my own free time, which is really nice,” he said. “Now I’m looking at it as investing in myself instead of another company and I’m trying to enjoy every single minute of it, even with this fight coming up. I reached the goal of quitting my job and training full-time and now I’m there and it feels really good. It’s good to put in that extra work now knowing that you’re dedicating yourself to just you, not someone else.”

He expects that dedication to his craft on a full-time basis will be evident at Toyota Center against Pilarte, though he doesn’t have anything to hang his head about when it comes to his first trip to the Octagon against Brazil’s highly-regarded Ramos, who decisioned him over three rounds. Yet over that 15 minutes, Newson showed the world – and himself – that he belonged in the big leagues.

“Before that fight, I wasn’t sure if I belonged or not,” said Newson, who had a 9-1 record on the regional circuit. “Once that call happened, I figured, ‘Okay, I can stand with this dude – he’s tall, he’s lanky and I definitely have power in my punches.’ And after that fight, it a hundred percent felt like I belonged there. All three rounds, he hit me with his best shots and couldn’t take me out. I even threw a submission that was close. That’s my go-to guillotine, but he’s a tall guy and very knowledgeable on the ground, so he defended it very well.” 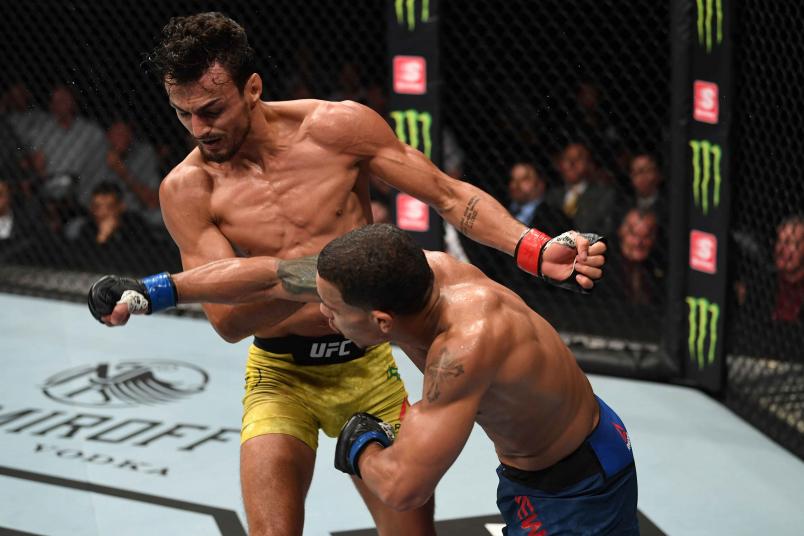 Vs Ramos in Minneapolis, 2019 (Photo by Josh Hedges/Zuffa LLC)

Newson laughs about the guillotine, as he felt the whole world saw his reaction to sinking it in, then losing it.

“I got a little too excited,” he said. “That was the only mishap I had in that fight where I’m just like, ‘I can’t believe I let that go.’ I thought I had it. And I’m pretty sure you can see it in my face. My eyes are just bugged out, shocked that he got out of it.”

That’s the fight game. And the best part about that game is that when a fight doesn’t go your way, there’s always another chance to get it right. For Newson, that chance is this weekend and, if anything, at least he’s used to the whole UFC experience the second time around.

“Everything was pretty new,” he recalls. “I didn’t know what I was doing and I knew I didn’t know what was gonna happen. So I went down to Minneapolis and told myself, just be a yes man. They say go this way or go that way, you do it. Now I know what to look forward to, which is nice.”

As for the fight itself, he expects it to be business as usual like it was the first time.

“Even in the fight I didn’t feel like I had the jitters,” he said of the Ramos bout. “I felt pretty composed in there. And even watching the fight afterwards, I was pretty surprised how composed I looked. It didn’t look like my first time in there.”

Maybe it’s because fighting’s in his blood. And with a dad who once boxed but had to give it up to be a father, it’s up to Journey to carry on the Newson name in combat sports. That’s fine with him.

“I’m only in this to prove myself that I belong.”