Fighting In Rio Was Meant For Jose Aldo

“There is a different flavor fighting in Rio,” he said. “I have the support of everyone here and I’m very excited, very positive that it’s going to be a good outcome."
By E. Spencer Kyte • May. 7, 2019

What a difference a year can make. Or in the case of Jose Aldo, 10 months.

This time last year, the Brazilian superstar was readying for a bout with Jeremy Stephens in Calgary, Alberta, Canada — his first non-title fight since WEC 41 when he took out Cub Swanson in eight seconds with a ridiculous double flying knee attack that remains one of the most impressive knockouts in the history of the sport.

He was on a two-fight losing streak, having suffered back-to-back third-round stoppage losses at the hands, literally, of reigning featherweight champion Max Holloway, first at home in Rio de Janeiro and then again in the rematch six months later in Detroit.

Not only had he suffered consecutive defeats, but after going nearly a decade without suffering a loss, Aldo was suddenly in the midst of a skid, sporting a 1-3 record in his last four fights, with all three defeats ending inside the distance. Despite being just 31, many wondered if the years of competing at the highest level and subjecting his body to the grueling weight cut that it takes to get him to the 145-pound featherweight limit was finally starting to catch up to him.

The bout with Stephens was viewed as a contest that would provide clarity about Aldo’s place in the division and future inside the cage.

Ten months later and a handful of days away from stepping back into the Octagon inside Jeunesse Arena in Rio, the thought of drafting Aldo’s career obituary and declaring his days of being a contender over seem like absurd ideas that couldn’t have been bandied about less than a year ago.

“I think letting my body rest was something my coach (Andre Pederneiras) and I figured out was something good for me,” said Aldo, who logged seven months between his second bout with Holloway and his engagement with Stephens in Calgary.

When he did return to action, the long-time featherweight champion returned to the win column as well, stopping Stephens with a blistering left hand to the body that was vintage Aldo and left him fighting back tears as he celebrated the victory in the Octagon.

Seven months later, he stepped into the cage in Fortaleza against fellow Brazilian Renato Moicano, a dangerous contender who had amassed a 5-1 record in the Octagon and was entering off a dominant first-round win at UFC 227 in August. Just 44 seconds into the second round, Aldo collected his second straight stoppage win, burying Moicano under an avalanche of punches before tearing out of the cage to celebrate amongst the crowd.

“We lost to the champion and I have to give him all the credit in the world for that,” Aldo said, reflecting on the twin losses that preceded the twin stoppage win that have returned him to contention and reminded everyone of his place in the division. “But I really think it’s his credit for beating me, not any mistakes on my end that made me lose.

“I really don’t see any pressure in fighting,” he added when asked if the reduced pressure of being in non-title fights contributed to his recent return to form. “I’ve been doing this since I was 17, so I really don’t feel any pressure; it’s not something that gets in my way.”

Pressure may not get in his way, but this weekend in Rio, there is a surging Australian focused on fighting for the featherweight title before the year is out standing between Aldo and a third straight victory.

While Aldo has enjoyed a resurgence over the last 12 months, Alexander Volkanovski has broken through to establish himself as a legitimate championship contender in the 145-pound ranks.

After racking up a double-digit winning streak on the regional circuit, the former rugby player added victories in each of his first four Octagon appearances to extend his run of success to 14 and establish himself as a new name to watch in the featherweight division. Then last summer in Idaho, he battered Darren Elkins while dealing with a couple busted ribs and followed it up five months later by scoring a second-round stoppage win over long-time Aldo rival Chad Mendes. 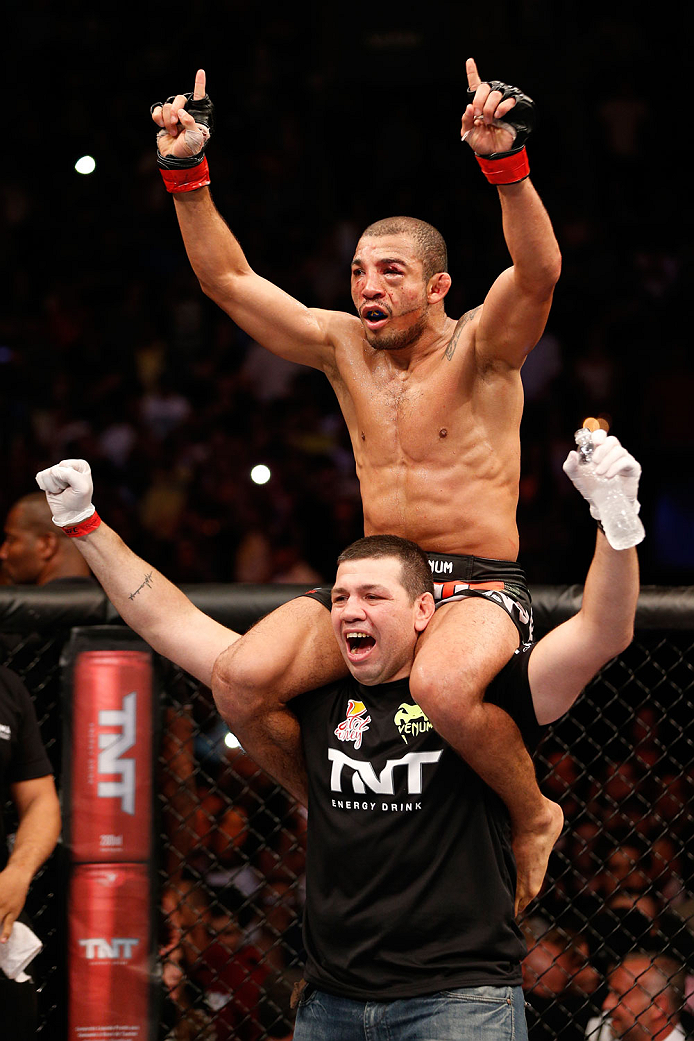 “I think that Chad hasn’t been fighting as well since he lost to me here in Rio the second time,” Aldo said, giving his thoughts on Volkanovski’s fight with Mendes at UFC 232 in December. “We felt that he hadn’t prepared enough and if he didn’t win the fight right away, he was going to have some trouble. That’s what we got from that fight.”

Though it sounds dismissive — and maybe it is — Aldo’s comments come from a place of confidence and belief in his abilities, not malice and disrespect.

He’s looked like himself again in the cage of late and delivered the kind of performances fans hadn’t seen since his WEC days, when he burst onto the scene as a fresh-faced bundle of kinetic energy and ran roughshod over the division, winning eight fights in 26 months, including claiming the title and defending it twice.

Now, he’s back home in Rio, energized by the atmosphere and support that comes with competing in familiar, friendly surroundings, ready to take on Volkanovski and secure another victory.

“There is a different flavor fighting in Rio,” he said. “I have the support of everyone here and I’m very excited, very positive that it’s going to be a good outcome.

“We’re really going in there to win. Hopefully I can get out with a knockout, but I’m going to do whatever I need to do to get the victory.”

And then, he may just celebrate in the crowd once more.