Fighting is More than a Job for Michael Chiesa 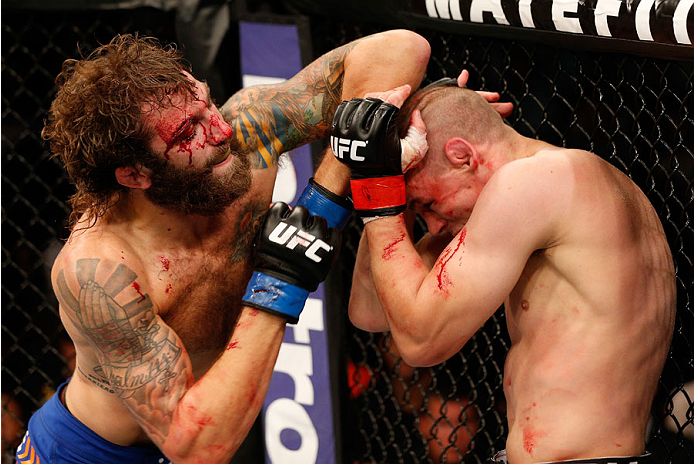 Michael Chiesa’s mom wasn’t having it. No way, no how. She wasn’t about to let her 13-year-old son watch the Ultimate Fighting videotape he begged her to rent, not with all the negative press and “two men enter, one man leaves” marketing of the then-outlaw sport of mixed martial arts.

But the teenage Chiesa was a resourceful sort, so when he found the UFC Ultimate Japan tape that featured Olympic wrestler Kevin Jackson against Frank Shamrock, he had his hook.

“I knew who he was because I was a wrestler,” Chiesa recalled. “So I said ‘Mom, you have to let me get this; Kevin Jackson’s a wrestler.”

She agreed, and Chiesa and his buddy Travis were giddy with anticipation to see Jackson take on this Shamrock guy.

“I said he (Jackson) is gonna throw this guy on his head and just kill him,” Chiesa laughs. “Then I watched Frank Shamrock armbar him and I’m going ‘how the hell did this happen?’ In a matter of two minutes I went from wanting to see Kevin Jackson to ‘oh my God, let’s go find some more tapes of Frank Shamrock.’”

Chiesa was hooked, and 14 years later, despite competing in the same UFC Octagon that Shamrock and Jackson fought in, he is still, first and foremost, a fan.

“For me, that’s important because I’ve always maintained that same feeling I’ve had since I was a 13-year-old kid in the movie store picking out the UFC tapes so I can watch. And I don’t have any kids, I don’t have a family; it’s just me chasing glory. It’s not about picking up paychecks. But now I have the opportunity to be that guy to another 13-year-old kid.”

That’s always good to hear, because while many fighters share Chiesa’s feelings about the sport, there is certainly a segment of the fighting population that isn’t scouring the internet for morsels of news or watching every fight every weekend. Chiesa isn’t one of those.

“It’s hard for me not to be a fanboy,” he laughs. “I love the sport so much. I was on the Underground (Forum) when it was on dial-up internet. But now that I’m here, I can’t put anybody on a pedestal; I have to treat every guy the same.”

That’s a lesson he learned the hard way back in July of 2013. Unbeaten as a pro, Chiesa had won season 15 of The Ultimate Fighter with a submission of Al Iaquinta in June of 2012 and he finished Anton Kuivanen eight months later. Next up was a bout in his home state of Washington, and he was holding all the aces when it came to his opponent.

“I was always a fan of (Jorge) Masvidal,” Chiesa said of the lightweight veteran. “And I had options of who I wanted to pick. I got a list of names because my opponent (Reza Madadi) fell out and when I saw that he was on there, I was like ‘man, awesome, this will be great.’ And I put him on this pedestal and I paid the price. I had a great first round, and in between rounds, there was a small wrinkle in my mental game and ultimately I crumbled. I learned a lesson from it, and that was to not put anybody on a pedestal. You can always be a fan of guys, but come fight night, they’re just somebody standing in my way. I’ve got to run through him.”

Chiesa has only lost once in three fights since the Masvidal bout, submitting Colton Smith and decisioning Francisco Trinaldo before losing a Fight of the Night matchup against Joe Lauzon due to a nasty cut over his eye. Chiesa was far from happy with the stoppage, but looking back he takes the blame for being in the position to let Lauzon cut him.

“This is nature of the business,” he said. “It’s one of those things where I trained really hard for that fight, just like I do for every other fight, and I don’t want to let all my work be cut short by something like that. I know it was a bad cut, but it’s not like I was getting beat; in my opinion I was winning the fight. I go back and look at it about as unbiased as I can, and the tide was swinging in my favor. But it’s my mistake. In my head, I was like ‘you know what, I’m gonna play rope a dope, I’m gonna let him punch himself out, and then I’m gonna turn it on and win the fight.’ Unfortunately, that didn’t work, and ultimately I can only be mad at myself.”

So he moves on, ready to take on Mitch Clarke this Saturday in Fairfax, Virginia. It’s a new year, but not a new start for Chiesa, who is just continuing a journey he began when he was 13. Along the way, he’s learned valuable lessons that he keeps with him, but when pressed and asked if there was any fighter around that he would have a hard time not putting on a pedestal like he once did before, his answer is immediate.

“He retired, but it would be BJ Penn,” Chiesa said. “BJ, to me, is always going to have that aura of greatness. In the prime of his career, he was phenomenal, and if you were to say ‘okay, name the first fighter that comes into your mind when I say lightweight division,’ I’m gonna say BJ Penn. Other than that, I look at all these other guys - and I follow the sport very attentively - and every time I watch them fight, I’m coming up with a game plan of how I’m going to beat them. But right now, I’ve got all my focus on one guy.”