Fighting has always been a part of Tai Tuivasa

Fighting has always come naturally to Tai Tuivasa, who fights Cyril Asker this Saturday on the main card of UFC 221 at Perth Arena in Perth, Australia.

When he was growing up, maybe too naturally.

“Well yeah, I’m from a place where fighting is pretty regular and it kind of makes up who you are and where you stand, in other words. And yeah, I’ve always liked to have a fight, and I’ve come out on top most times.”

Standing 6-2 and weighing almost 300 pounds as a teenager didn’t stop “Bam Bam” from finding plenty of trouble on the streets of Western Sydney.

“I’m from an area where there’s a lot of (300-pound) guys, so there was enough of them around (to fight), but I also hung around an older crowd as well, so I was hanging around adults at a young age.” 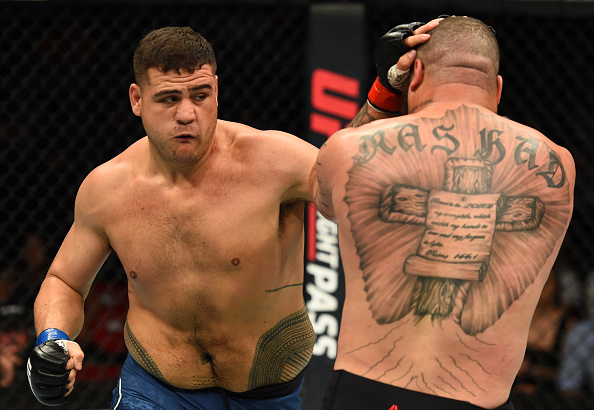 But fighting wasn’t Tuivasa’s only talent. And coming from a family that struggled to make ends meet, it wasn’t his ticket to a better life. That was rugby league.

Tuivasa was well on his way to a lucrative future in the sport, having been recruited by Australia’s National Rugby League (NRL) club, the Sydney Roosters, at age 17.

But as his NRL career was taking off, Tuivasa was realizing there was a better place to use his talent for fighting than the street.

“We were sitting around, this was when UFC started coming on TV. I was sitting with a few of the boys and we were watching some fights and some of the boys were like ‘Tai, I reckon you could smash these guys,’ and I was like, ‘yeah ,I reckon I could too,’” said Tuivasa. “And I went down to the gym, and instead of street fighting against nobodies, (I thought) why not test myself against guys who are trained and say they can fight?”

According to Tuivasa, rugby league is a sport that rewards obedience and a cookie cutter personality.

Get on the wrong side of your coach or club officials, and you will find yourself on the bench.

But Tuivasa found less politics in MMA. As long as he kept winning, he could just be himself. If he lost, there were no teammates to blame.

“(In rugby league) You have to try and be a certain person, but fighting just came natural to me, and I always liked the fact that if I stuff up it’s on me.”

So he did the unthinkable for the many young Australian men who dream of playing professional rugby league: he left the NRL and made his MMA debut in 2012.
RELATED CONTENT: Tuivasa featured on Fighters On the Rise | UFC 221 Fantasy Preview

The fighter of Aboriginal and Samoan descent quickly gained a reputation on the Australian scene as a talent to watch, finishing his first opponents via first-round knockout.

Soon, Tuivasa thought he could get by on talent alone - which is forgivable considering the hype he created - until he ran into Australian kickboxing legend Peter Graham in a bout on April 27, 2013. It wasn’t an MMA fight, but a cross with boxing, meaning fighters couldn’t kick, elbow or knee and only had 30 seconds of ground time.

While Tuivasa managed to land heavy shots on the K-1 veteran in the first round, his gas tank failed him in the second, giving Graham the opening he needed to KO “Bam Bam” with a straight right.

“(At the start of my fighting career) I was just knocking everyone out and I just thought, this is easy, I don’t need to train, I don’t need to do none of that. And then I came up against a real champion, a person who’s been around a long time and had a lot of experience, and he handed my ass to me,” said Tuivasa. “So then I had to wake up myself and realize maybe you’re not as good as you think you are. You have to train and you have to work hard to be running with the best, and fortunately, I’ve lived and I’ve learned, and my attitude to training and all that sort of stuff has changed dramatically.”

The KO loss was one of two important turning points in the career of Tuivasa, who is trained by Tama Te Huna and Steve Ashby at Western Sydney’s Lions High Performance Centre.

The second came in 2016 as Tuivasa and his partner Briony Pedro (the sister of UFC light heavyweight Tyson Pedro) welcomed their first child.

“Bam Bam” is motivated to give his firstborn, a son named Carter, a better start in life than he had.

“I don’t want him to grow up like how I have. I’ve been given, like I said, some talent, and when hard work meets talent, I can be something good, and I know I can make something out of this for my son and my little family,” said Tuivasa. “So that pushed me, it really pushed me. I don’t want him to go through what I went through, so if I work hard for a bit, I’m sure he’ll be okay.”

The fruits of a noticeably trimmer Tuivasa’s hard work were apparent in his UFC debut against Rashad Coulter at UFC Fight Night: Werdum vs Tybura in Sydney on November 19, 2017.

The debut was a long time coming, as after signing with the UFC a year prior, Tuivasa was forced to sit on the sidelines while he recovered from knee surgery.

For Tuivasa fans, an early KO may have seemed a foregone conclusion. But the method was anything but expected as he knocked Coulter out cold with a jumping knee at 4:35 into the first round.

When an excited Tuivasa remarked in his post fight interview that “You never know what ‘Bam Bam’s’ gonna do,” that was no joke.

The knee wasn’t expected by anyone, including Tuivasa, who says it was the first time he’s ever attempted the technique. And that includes training.

“No, never, (have I practiced that knee before). I just kept noticing his head going to the side and yeah, it’s just something that I saw and I thought I’ll give this a go.”

Tuivasa uses Vanessa Carlton’s “1,000 Miles” as his entrance music, drops F bombs on the microphone after the fight, and moonlights as a social worker for elderly Indigenous Australians. There is nothing forced or formulaic about Tuivasa inside or outside the UFC Octagon.

Tuivasa’s lack of pretense cut his NRL career short, but it might win him support in MMA. After all, few things in sports are more transparent, or irritating, than an athlete putting on an act.

But when it comes to fighting, he does have one parameter: he wants to knock you out early. All of his wins have come via first-round KO.

That’s the plan against France’s Asker. Holding two wins and two losses in the UFC, the Frenchman is a BJJ brown belt with solid skills in wrestling, submission and ground-and-pound.

“I wouldn’t say (I have) an exact game plan, more just being aware of what his strengths are, and that’s getting to the cage and pulling his opponents down. Obviously, he’s a ground fighter, I’m not stupid, I know he’s going to try and get me to my back,” said Tuivasa, the first Indigenous Australian to win in the UFC. “I’m not very hard to read as well; I’m sure he knows I’m going to try and stand up with him, so at the end of the day I suppose it’s what happens on the night.”

Come Saturday, Tuivasa says he will do what has always come naturally.

“Just gonna keep doing what ‘Bam Bam’ does; get in there and get it over and done with, put a show on for the crowd.”