“I just love doing it, plain and simple,” she said. “There’s nothing in this world that’s ever made me feel the way fighting and competing does. There is literally nothing else I want to do.”
By Thomas Gerbasi • Feb. 15, 2019

If the best version of Cynthia Calvillo we’ve ever seen shows up to fight Cortney Casey on Sunday, the Sacramento strawweight may have a few words of thanks to someone who won’t be in her corner in Phoenix.

“David Goggins has been my man this fight camp,” said Calvillo of the retired U.S. Navy SEAL whose motivational speaking and new book “Can’t Hurt Me” has been both an inspiration and a reminder to athletes in all disciplines. “I listen to his book every morning and when I’m driving and it’s been very motivating and inspirational. I love being able to enjoy the grind and understanding that you’re one of the baddest mother**kers on the planet and this is what you get to do.”

And while adopting that embrace the grind mindset is important, there’s a physical element as well in the form of Goggins’ “40 percent rule,” which states that when you feel like you’ve hit your limit, you’ve only hit 40 percent of it, meaning that there’s more left to give. And Calvillo has been giving it in preparation for her sixth UFC bout.

“You’re giving your 40 percent, you’re working this hard and when I’m tired, I got another 40 percent,” she said. “Just telling yourself that, it’s a big game changer. You’re not giving in when you think you’re fatigued because, in reality, our bodies can do some amazing things.”

Sometimes, all it takes is a new book, podcast or video to give a fighter a spark that can ignite that competitive fire again. Calvillo is always fired up for a fight, saying her life consists of training and hanging out with her dog, but with this added motivation, it may be tough to hold her back on fight night.

At least that’s what fans are hoping for, as Calvillo-Casey is a Fight of the Night waiting to happen. And with Casey already throwing down the gauntlet for a bonus-winning bout, Calvillo is eager to join the fray as well. 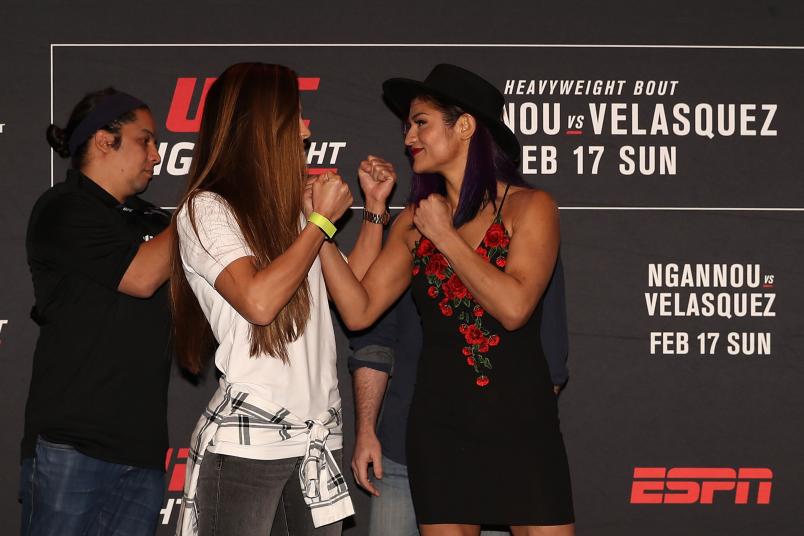 “For sure, I’m ready,” she said. “I’m ready for all of it. I want to get the job done in the first, but I’m ready to go for a banger because I know Cortney Casey is not easy to put away. She always stands there and fights. She loves it. I’ve seen her get emotional in fights, her and Felice (Herrig) are flipping each other off, but I love that because I know they love fighting, and I like seeing that fire in them because that’s what I’ve got inside myself too. I’m ready. It can be a brawl standing or it can be a brawl on the ground.”

Back for only her second bout since December 2017, Calvillo would likely be excited to fight anyone this weekend, and it’s a reminder of how much she missed the sport while on the sidelines for 11 months following the lone loss of her career against Carla Esparza. And when she did come back last November to face Poliana Botelho in Argentina, she admits that those familiar – and welcome – nerves arrived right on schedule.

“Honestly, anytime that I’ve ever gone in there, I’ve always been nervous, and I feel like when I am nervous and I am worried, I perform better,” said Calvillo, who submitted Botelho in the first round. “I felt really great. I was really excited to get in there and I felt really grateful and blessed. Sitting out for 11 months was driving me crazy, and when I was making the walk out, I was taking it all in. I was just super happy and grateful that I was able to make that walk to the Octagon again after having such a long layoff. So, if anything, it just put me in a good headspace, and once the bell rang I was able to focus and get the job done.”

The win put Calvillo back in the rankings and back on the path to a title that she was on before she lost to Esparza in the last fight of a wild 2017 campaign that saw her arrive on the UFC scene with three consecutive wins. Going 3-0 to start her UFC career was impressive enough, but it was the way she fought that garnered the 31-year-old a huge fan base. That fighter returned against Botelho, and it’s expected that Casey will bring that out of her too. But what if a firefight breaks out in Arizona and the game plan says go for a takedown?

“Well, the last time I went in with a game plan, I came up short,” Calvillo laughs. “When I fought Carla, I felt so good, I had my game plan, and it just went the way it did. I stuck to it and never made the adjustments. So now I’m just prepared for everything. Cortney Casey is a veteran of the sport, she’s fought the Who’s Who of the strawweight division and she’s not an easy person to finish, by any means, and she has really tough fights. She does not back down, she is ready to fight whoever, whenever and I’m excited. I think we’re gonna see the best Cortney Casey fighting me because this is probably the longest fight camp she ever had. I know she’s taken some last-minute fights and has always had close fights, so I expect a super tough fight. But I’m gonna look for the finish whatever way I can get it. If I can get in there and get it done in the first round, then heck yeah. But I’m ready to fight a five-round fight if they gave me a five-round fight.”

And as Goggins would say, “Don’t stop when you’re tired; stop when you’re done.” Calvillo likes the sound of that, because other than hanging out with her dog, fighting is the only thing on her radar.

“I just love doing it, plain and simple,” she said. “There’s nothing in this world that’s ever made me feel the way fighting and competing does. There is literally nothing else I want to do.”