Fighting Is In Gavin Tucker's Soul

With degrees in music and a former life as a jazz guitarist, Gavin Tucker would have been excused with no questions asked if he thought about going back to his old gig after a punishing loss to Rick Glenn in September 2017.

He won’t deny that it did cross his mind.

“That little inner voice creeps in sometimes,” Tucker admits. “But you’ve just gotta tell that guy to shut the f**k up.”

Tucker laughs, knowing that the only ones who will understand what he’s talking about are those who have walked up those four steps into the Octagon or ring. Everyone else will scratch their head.

“People ask why you do it, and I actually came up with a good answer for it,” he said. “I always tell them that in this world, at least for me, there are things that are way more important than my happiness. People do things and try to self-serve because they want to be happy or feel a certain way, but once this gets into your soul, it’s more important than happiness, it’s more important than anything else. This is a battle for the direction that your life goes in. This fight and the outcome is gonna push my life in one of two very drastic directions. I could win this and I’ll continue on this path and have success and make some money and my personality and self-image turns into the fighter. Or, like in the last fight, it can break you and make you see yourself differently.”

Nova Scotia’s Tucker hasn’t fought since his decision defeat at the hands of Glenn, one which marked the first loss of his professional career. Before that, Tucker was a fighter on a rapid rise through the ranks, and after an impressive win over Sam Sicilia in his UFC debut in February 2017, he was the hottest thing since pizza. Then Glenn got in the way and handed out a one-sided thrashing that left everyone from UFC President Dana White to fans on social media wondering why the fight wasn’t stopped.

Tucker wasn’t one of them. He signed up for a 15-minute fight and he gave what he had for 15 minutes. It wasn’t enough for the victory, but he never stopped chasing it. And he never thought of quitting.

“(Coach) Firas (Zahabi) told me there are two reasons people really quit,” said Tucker. “They give up and you lose heart, basically. Or you have an injury that takes you out and you can’t do it anymore. For me, I’ll never lose heart and I’ll never change how I see myself. That doesn’t just change in a moment when you’re getting an ass whupping and you’re not the hammer no more. I’m not saying I’ll never break – everyone has a breaking point and they’re buried in different spots – but I feel like I am that person who won’t quit, and I pray to God I get a chance to go out this time and show people. I’m serious and I’m here.”

At the moment, “here” is Edmonton, Alberta, Canada. Tomorrow night, Tucker will make his first appearance since 2017 and he will do it in the same building where he lost to Glenn. That’s not just a coincidence; it’s a chance for the 33-year-old featherweight to exorcise some demons when he meets South Korea’s SeungWoo Choi.

“It is exactly that,” he said. “When Rocky (Balboa) got beat up by Clubber Lang (in Rocky III), he comes back and Clubber’s hitting him and he’s getting the flashbacks of the last time he got his ass whupped and he had to overcome the moment. (Laughs) I know in the fight there are gonna be very uncomfortable moments. You can plan all day long, but a fight’s a gravel road. You don’t get to drive it like you want to. So I’m excited to see what kind of obstacles come up. Every time I run into some obstacle, it always turns into an awesome opportunity for me to grow.”

The Glenn fight was an obstacle, for sure. And in the ensuing months, Tucker has done everything in his power to get back to active duty. There have been setbacks in the form of injuries, but he’s kept training, whether at home at Titans MMA, in Montreal with Tristar, or even in locales such as Amsterdam and New York City.

“It’s been a crazy couple years,” said Tucker, who was also awarded his jiu-jitsu black belt from Renzo Gracie. “There’s been a lot of injuries, from broken hands to pinched nerves, and a lot of crazy stuff has happened, but I’ve been consistent. I’ve been all over and I can’t wait to get that door locked again so I can get back in this cage. It’s gonna be a much different version of me than people have seen.” 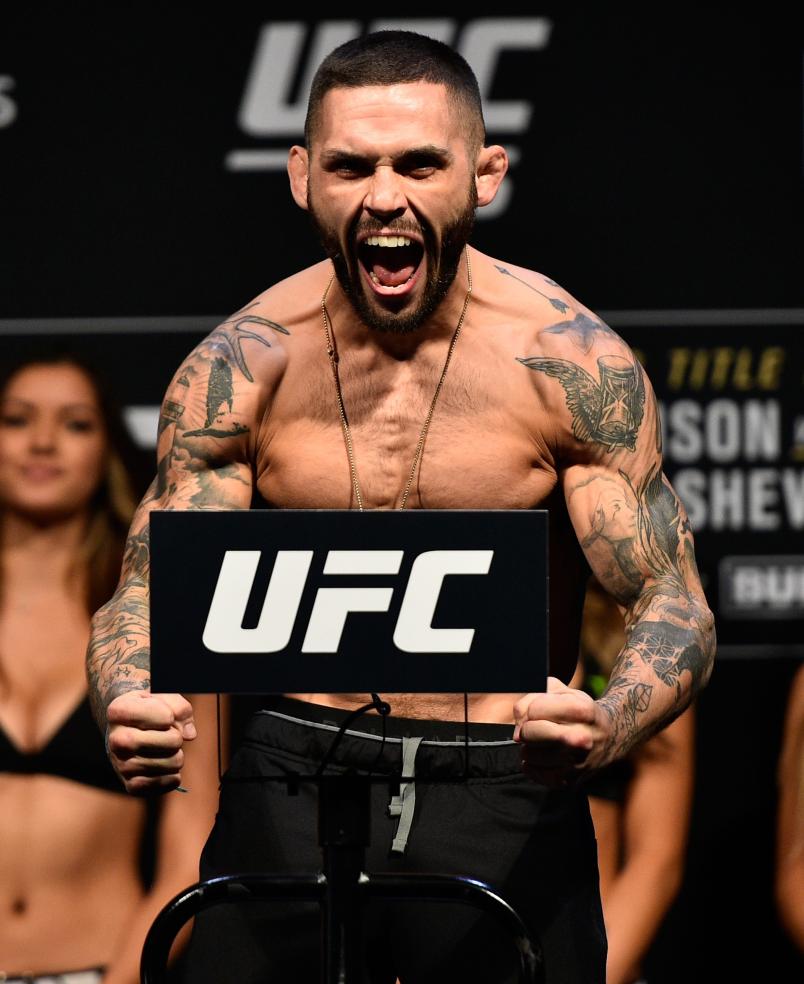 EDMONTON, AB - SEPTEMBER 08: Gavin Tucker of Canada poses on the scale during the UFC 215 weigh-in inside the Rogers Place on September 8, 2017 in Edmonton, Alberta, Canada. (Photo by Jeff Bottari/Zuffa LLC/Zuffa LLC via Getty Images)

EDMONTON, AB - SEPTEMBER 08: Gavin Tucker of Canada poses on the scale during the UFC 215 weigh-in inside the Rogers Place on September 8, 2017 in Edmonton, Alberta, Canada. (Photo by Jeff Bottari/Zuffa LLC/Zuffa LLC via Getty Images)

The last year has been particularly intense for the Newfoundland native, as he’s taken matters to a new level when it comes to his dedication to the game and living a life few would understand.

“I put everything into it,” he said. “I spent times this year literally living in the basement down at Titans or sleeping in gyms. I put a futon in there and didn’t really have a residence for a while. I had my mail coming to the gym, and I kept telling myself this is gonna be worth it. It has to be. I need it to pay off at this point. And this fight, I’m not thinking about the financial reward. Obviously everyone wants to be wealthy and have options, but just getting to this fight is the reward and I’m gonna get in there, control my emotions this time, do a proper weight cut, no more trying to be this crazy character they painted for me who’s a big finisher and doing crazy s**t from the get-go. I’m gonna stay composed, be sharp, do the things I do in the gym every day and not let the moment take me over.”

That is a lot to think about for one 15-minute segment of his life, and he hasn’t stopped thinking about it. But he’s not complaining or wishing something else can occupy his thoughts. He wanted this, and now it’s here.

“I’ve been waiting two years for this, it’s an important moment, so let it be important, let the pressure sink in and just deal with it and do it,” said Tucker, who is asked again why he does this.

“I smashed a lot of life into 33 years and this fist fighting s**t gets right into your soul like nothing else,” he said. “After you get a bit of battle in you, it’s too late. There’s nothing else to do, there’s no other option. I can’t even think past the 27th. This is the most important thing in the world to me.”