Fighting in Germany brings an extra bit of responsibility that you don’t have to carry in Las Vegas, Montreal or London. In a country where UFC fights were banned from free TV for six years and media used to rip the sport apart for just as long, first impressions count. Just ask Stefan Struve about the reception he got after he suffered a huge cut on his forehead during Cologne’s UFC 99 in 2009.

Now that the Octagon is back on TV for the first time since 2010, there will be lots of eyes on UFC Fight Night from all directions. Putting on a clean, diplomatic performance for the critics in the country is not what’s on Josh Barnett’s mind going into his headlining bout inside Hamburg’s Barclaycard Arena on September 3.

“I don’t really care what they want or don’t want,” he says of the people who would prefer the UFC to stay off of German soil. “I don’t care if people want to talk poorly about it or if people find it to be brutal.”
RELATED CONTENT: Josh Barnett fighter bio | Free Fight - Barnett vs Mir | UFC Breakdown - Fight Focus | On the Mat

Barnett is here to fight, and if you don’t like it, just don’t watch him do it, he feels. “The Warmaster” has always been a vocal advocate of his opinions. Bringing up concerns about the sport he loves seems to have triggered those instincts. Having MMA banned from TV for political correctness is not what’s going to get you Barnett’s sympathies.

“(Political Correctness) actually makes us weaker. Worse. Less capable, less great, less honest and less able to not only be better as an individual but to increase and move human society further, which is really the ultimate goal.”

So, it seems like there’s more to Barnett’s bout in Hamburg against Andrei Arlovski than the naked eye can see. For Barnett, a fight – in the UFC or anywhere else – is not merely a physical contest in search of glory and gold, but a “means to an end to have a more fulfilling life.” 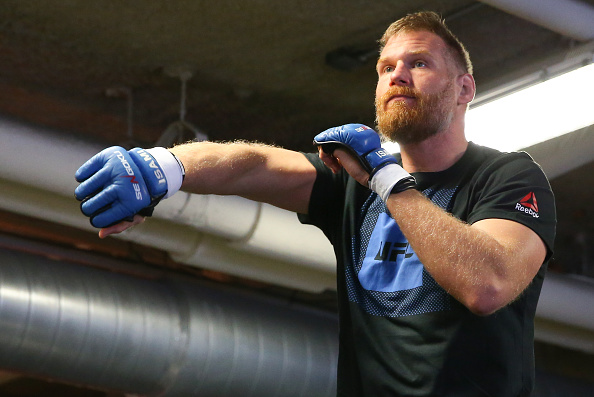 And as such, even the 5,500-mile-trip from California to Hamburg is not what it would be for most of his peers – a strenuous distraction – but a welcome addition to his ever-growing collection of life experiences.

“When I started fighting, almost all the fights required some level of traveling. The idea that I could use this as a career to go out there and achieve some sort of fortune and to be able to test my skills and travel the world on someone else’s dime, that was really enticing to me.”

Barnett is out to collect experiences, and traveling to the country that his ancestors lived in certainly falls into that category – the Seattle, Washington native will even be wearing the German flag on his Reebok clothes. Once he strips those off on fight night, his travel will continue in a different way.

“Not just in a material way, but in an intellectual and more deep and meaningful way as an individual. Everything I do in life for me is an opportunity to try and experience the most of what life has to offer; to grow as much as I can and to become the best version of myself with the most experiences that I can gather.”

Still, it’s not just all fun and – philosophical – games for Barnett when it comes to fighting.

“As a competitive athlete, part of it is to go out there and express my will and my strength, to show my intent as far as being the best. And to deliberately go and face challenges, to find these challenges and overcome them, to destroy them and impose my will upon people in this sport.”

Barnett is a man of many passions and talents. But as sophisticated as he is when you meet him with his gloves off – once the cage door closes, you can be sure that he will try to ruin you with the same intensity and passion that he takes on anything else in his life with.

Next, he’ll try to take “it” from Andrei Arlovski. With 80 professional fights and 35 years of experience between them, it’s almost a miracle that the two of them never faced off inside the cage before, and Barnett wants to make up for lost time by getting the whole thing over with as quickly and decisively as possible.

“He’s ranked higher than me right now. People have their doubts on whether or not I can win, and that is enough to give me that inspiration. I want to go out there and completely run over the top of him. I want to make this fight look bad.”

That’s not to say that he’s not aware of the qualities that have led Arlovski to wins against names such as Frank Mir, Travis Browne and Fabricio Werdum.

“He’s proven himself time and time again. If you look at his accomplishments, they speak for themselves. He was the UFC heavyweight champion; he fought in several high-profile fights in various companies. The guy is clearly capable and competent. But, right now, the only thing that I can really consider him is an enemy.”

An enemy who will be more “friendly” to him than Roy Nelson, who Barnett said he was upset with because he took him all five rounds this past September?

“I really can’t expect any charity from Arlovski,” he laughs.

“He might deliberately make this fight go five rounds just so that we have to take our book and shuffle it around the cage for longer than we’d like to. And in some way that would be my own fault. So if I want this to be a short fight, I have to go out there and take care of business.”