FIGHTERS YOU SHOULD KNOW - UFC 258 EDITION

When Demian Maia first arrived in the UFC, he rattled off five straight submission victories to establish himself as a contender in the middleweight division.

Rodolfo Vieira is two-fifths of the way there and heads into his UFC 258 matchup against Contender Series alum Anthony Hernandez looking to move one step closer to replicating the efforts of the multiple-time title challenger.

The 31-year-old is a truly world-class Brazilian jiu-jitsu practitioner, earning five gold and two silver medals during a four-year stretch at the World Championships where he won his division every year, while earning a first and twin second place finishes in the absolute division. Vieira followed that up by claiming gold in the 99kg division of the ADCC Submission Wrestling World Championship in 2015 before ultimately transitioning to MMA in 2017.

After amassing a perfect 5-0 record, including a four-pack of first-round finishes on the regional scene, Vieira matriculated to the UFC Octagon, where he maintained his run of success. Debuting in the summer of 2019, he pushed his record to 6-0 with a second-round submission finish of Oskar Piechota, a BJJ black belt under Robert Drysdale, in Montevideo, Uruguay, before returning last March for his sophomore showing, which culminated in a first-round finish of Saparbeg Safarov.

Built like a tank, but still figuring out the nuances and intricacies of competing inside the cage, Vieira gets a step up in competition this weekend as he faces off with Hernandez, one of several former LFA middleweight titleholders currently stationed on the UFC roster and a graduate of Season 2 of Dana White’s Contender Series. Though he’s struggled to string together consistent results over his first three trips into the Octagon, the 27-year-old Californian has been in there with a handful of quality opponents and has the skills to push Vieira on Saturday night.

This is a big opportunity early in the year for the talented Brazilian, who has the potential to be a dangerous specialist in the 185-pound weight class over the next several years. If he can maintain his success and add another finish to his resume, Vieira will be on a three-fight winning streak in the UFC and in a good position to earn another step up in competition next time out.

And given how much the middleweight landscape has changed over the last couple years, he could very well find himself in the fast lane to contention with a couple more quality outings later this year.

Nicknamed “The Future,” Barber returns for the first time in just over a year after suffering a torn ACL in her UFC 246 loss to Roxanne Modafferi when she takes on Alexa Grasso this weekend.

The 22-year-old garnered a ton of deserved attention while earning four wins in as many starts over an 11-month stretch in 2017 and 2018, resulting in a main event assignment on the second season of Dana White’s Contender Series in July 2018. Barber punched her ticket to the Octagon with a third-round stoppage victory over Jamie Colleen, then rattled off three consecutive finishes to begin her UFC tenure, stopping Hannah Cifers, JJ Aldrich, and Gillian Robertson to establish herself as one of the top young talents on the roster.

UFC 258: Inside the Octagon - Usman vs Burns

She stumbled, but showed her toughness last time out against Modafferi, battling to the final horn despite injuring her knee early in the fight, and now looks to resume her winning ways as she squares off with Grasso.

Barber has long talked about wanting to break Jon Jones’ record for being the youngest fighter to hold UFC gold, but whether she achieves that goal or not, she is undoubtedly someone who should be a factor in the flyweight division for the foreseeable future, excuse the pun.

The Colorado native has only gone the distance in one of her eight career wins and brandishes the kind of power and ferocity with her striking that differentiates her from the majority of her contemporaries and counterparts. Couple that with the toughness and resolve she exhibited against Modafferi, a strong work ethic, and a ton of quality coaching, and there are plenty of reasons to believe that Barber is someone who will remain in the thick of the chase in the 125-pound weight class.

Before Barber was the unbeaten rising star rocketing her way onto the UFC roster, there was Grasso, who established herself as a star on the rise while amassing an 8-0 record that included four victories inside the Invicta FC cage.

The talented Mexican fighter earned a unanimous decision victory over TUF alum Heather Jo Clark in her promotional debut but struggled to find consistency as she battled elite competition, injuries, and weight-cutting issues, which ultimately prompted her move to the flyweight division.

While there is a tendency to rush to judgment with fighters as soon as they stumble, a closer inspection of Grasso’s resume shows losses to seasoned veteran (Felice Herrig), a powerhouse wrestler and rising star (Tatiana Suarez), and a former titleholder (Carla Esparza), with good wins over Randa Markos and Karolina Kowalkiewicz falling in between those setbacks. 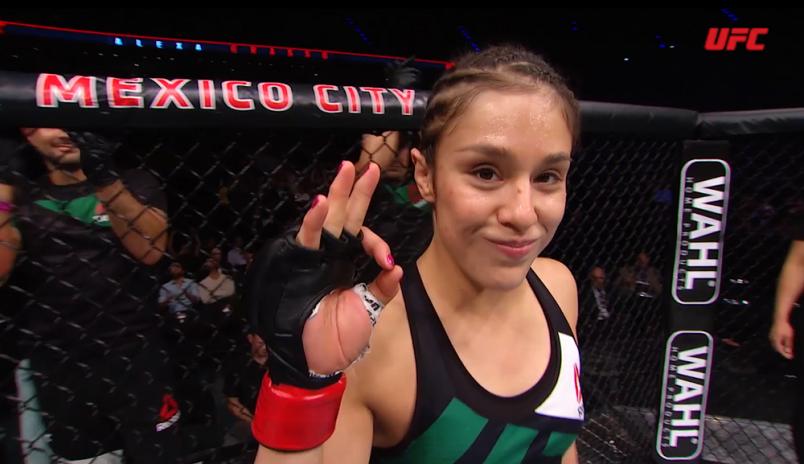 Back in August, Grasso made her flyweight debut, earning a clean sweep of the scorecards in a bout against Ji Yeon Kim where she showcased the footwork, movement, and fluid striking that made her such an intriguing talent as she climbed the ranks and arrived in the UFC. She’s always exhibited toughness and showcased the sharp boxing that helped make her such an intriguing prospect during her rise through the ranks, but she’s also added in more kicks, making her offensive output a little more varied.

Having successfully navigated the cut to flyweight last time out and showing no impact to her speed and movement, it will be interesting to see how the 27-year-old looks in her second appearance in the 125-pound weight class, as she’s now more settled in and focused on preparing to compete at this weight.

This pairing with Barber is an exciting matchup that is sure to carry divisional significance both now and going forward, so you won’t want to miss it.