Before each event, Fighters on the Rise shines a spotlight on three athletes set to compete that weekend that are, as the series name suggests, climbing the ranks in their respective divisions.

As the year winds to a close and we all start looking ahead to what 2022 may bring, I wanted to put together an advanced list of competitors to familiarize yourself with now and keep an eye on next year — The Dynamic Dozen for 2022, if you will — because I have a feeling several members of this collective will be championship contenders at some point in their UFC careers.

(Note: they’re listed in alphabetical order, not some kind of hierarchy; it’s just the easiest way to do things)

A member of the Fortis MMA team, Johns needed a minute to really find his footing inside the Octagon, registering a narrow split decision victory in his debut before getting stopped in his sophomore appearance. He rebounded with a third-round stoppage win in his third showing, and replicated that effort in his lone fight of 2021, sending him into 2022 on a tidy two-fight winning streak and designated as a person of interest in the ultra-competitive 135-pound weight class. 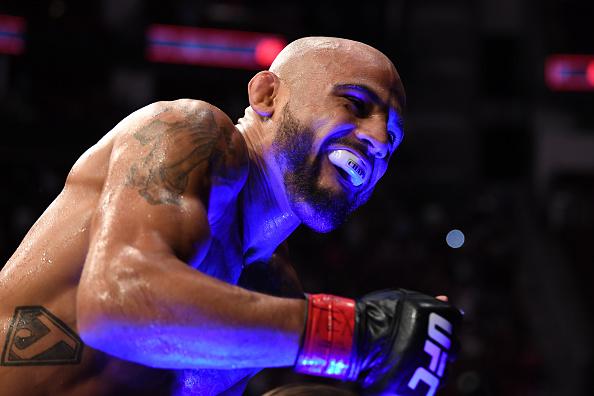 Miles Johns reacts after defeating Anderson dos Santos of Brazil by knock out in their bantamweight bout during the UFC 265 event at Toyota Center on August 07, 2021 in Houston, Texas. (Photo by Josh Hedges/Zuffa LLC)

Johns, who earned a UFC contract with a unanimous decision win over Richie Santiago on Season Three of Dana White’s Contender Series, is 12-1 overall and came up facing quality competition on the regional circuit, much like the rest of his teammates at the Dallas training outpost. His last five fights prior to his Contender Series appearance came under the Legacy banner and include a unanimous decision victory over Levi Mowles and a split decision win over Adrian Yanez in a five-round championship battle.

“Chapo” looked outstanding in his UFC 265 bout against Anderson Dos Santos, displaying sharp, quick striking and good movement, picking his spots, attacking different levels, and battering the Brazilian veteran before putting him away with a brutal combination, digging a left hook to the body and chasing it with a clubbing overhand right.

Bantamweight is flush with talent and ultra-competitive, but do not sleep on Johns as an emerging name to watch in 2022.

Though he signed with the UFC in early 2020, Kape didn’t make his promotional debut until February 2021, dropping a unanimous decision to flyweight contender Alexandre Pantoja. Five weeks later, he hustled back into the Octagon and landed on the wrong side of a split decision verdict in a clash with the returning Matheus Nicolau. 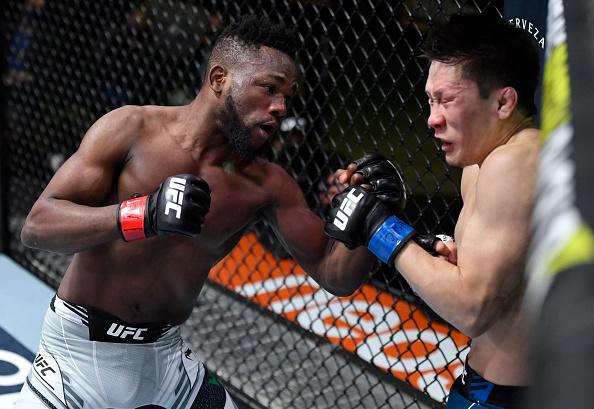 Manel Kape of Angola punches Zhalgas Zhumagulov of Kazakhstan in their flyweight fight during the UFC Fight Night event at UFC APEX on December 04, 2021 in Las Vegas, Nevada. (Photo by Jeff Bottari/Zuffa LLC)

Less than three months into the year, the highly touted new arrival looked like a potential bust. He was too hesitant, showing only scattered glimpses of the explosive style that made him a fan favorite in Japan and a highly regarded addition to the UFC roster. Since then, however, Kape has enjoyed a return to form.

He finally broke into the win column with a first-round stoppage win over Ode’ Osbourne at UFC 265, though he did miss weight, but did everything right in early December, making weight before finishing Zhalgas Zhumagulov in just over four minutes to end the year on a two-fight winning streak.

Kape has “The It Factor” and if he can continue to deliver performances like his last two outings, he could very well find himself in the championship conversation in 2022.

Tagged in to replace Frank Camacho on short notice opposite the veteran lightweight, McKinney walked to the center of the Octagon, cracked Frevola with a clean one-two, and wrapped up his first UFC victory in all of seven seconds. It was one of the best debuts of the year — and one of the best debuts in UFC history, especially considering he’d fought eight days earlier — and established “T.Wrecks” as one of the top breakout fighters of the first half of the year.

He was supposed to return to action in late November, but his bout with Fares Ziam was postponed the morning of the fight when one of the members of his team tested positive for COVID. The young lightweights have already been re-booked for a late February engagement, and you would be well served to keep an eye on the 27-year-old from Spokane that evening and beyond. 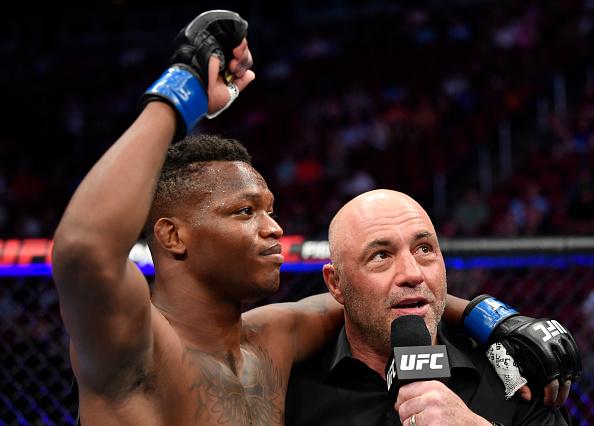 McKinney earned four wins in 2021 in a combined 112 seconds, finishing each of his four opponents by stoppage due to strikes. The scary thing to think about is that everyone you ask about the promising lightweight swears that his wrestling is even more developed and dangerous than his striking.

If debuting fighters can make the weekly editions of this series with regularity, then I don’t see any reason why I shouldn’t include Mokaev on this 2022 preview.

The 21-year-old flyweight, who signed with the promotion in mid-November, went 23-0 as an amateur, winning back-to-back IMMAF titles before racing out to a 5-0 start as a professional, most recently choking out Irishman Blaine O’Driscoll in September.

Born in Dagestan, he’s lived in England since leaving Russia with his father at age 12, settling in Wigan before shifting his training to Manchester. He’s won British wrestling championships, European Brazilian jiu jitsu accolades, and has designs on breaking Jon Jones’ record for being the youngest fighter to claim UFC gold.

It’s a lofty goal for Mokaev to set for himself, and the competition in the flyweight division continues to deepen and improve with each passing month, meaning it certainly won’t be easy, but with roughly two years to meet the challenge and his debut penciled in soon, I suggest circling your calendars and remembering his name, because chances are you’re going to hear a great deal about the promising prospect in the first quarter of 2022.

Speaking of talented fighters from Britain…

A case could be made for Murphy being “The Mayor of Fight Island,” as the featherweight has made all four of his UFC appearances in Abu Dhabi, following up his split draw result against Zubaira Tukhugov at UFC 242 in the fall of 2019 with a first-round stoppage win over Ricardo Ramos in his lone appearance of 2020. 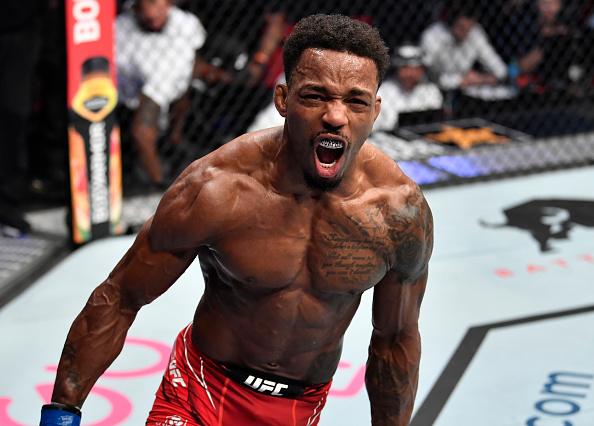 Lerone Murphy of England celebrates after his knockout victory over Makwan Amirkhani of Finland in a featherweight fight during the UFC 267 event at Etihad Arena on October 30, 2021 in Yas Island, Abu Dhabi, United Arab Emirates. (Photo by Chris Unger/Zuf

“The Miracle” made two more trips to the UAE in 2021, scoring a unanimous decision win over Douglas Silva de Andrade in January before knocking out Makwan Amirkhani with a perfectly timed knee just 14 seconds into the second round of their clash at UFC 267 at the end of October. Now 10-0-1 for his career, the 30-year-old should land another step up in competition in 2022.

There are similarities between Murphy and welterweight contender Leon Edwards, and it extends beyond the fact that both are relatively low-key British standouts. Like Edwards, Murphy has a complete skill set and has quietly been flashing those diverse talents without much fanfare to begin his UFC tenure.

His victory over Amirkhani opened a lot of eyes, and if he’s given the chance to really shine next year, do not be surprised if continues to replicate Edwards’ efforts in the featherweight ranks and makes a run towards the top of the division.

Closing out this Euro-centric collection of emerging talents to pay close attention to going forward is Shore, the undefeated 26-year-old Welshman who pushed his record in the UFC to 4-0 with a pair of gritty decision wins in 2021.

“Tank” has never tasted defeat in 27 fights, earning a dozen wins in as many starts as an amateur before posting 15 consecutive victories and counting as a professional. He claimed Cage Warriors gold before signing with the UFC and has kept the ball rolling since arriving on the biggest stage in the sport, earning stoppages over Noehlin Hernandez and Aaron Phillips before out-hustling Hunter Azure and Ludovik Sholinian this past year. 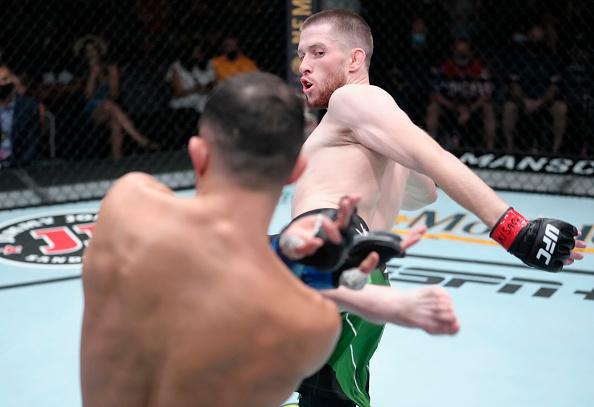 Jack Shore of Wales kicks Liudvik Sholinian of the Ukraine in their bantamweight fight during the UFC Fight Night event at UFC APEX on September 04, 2021 in Las Vegas, Nevada. (Photo by Jeff Bottari/Zuffa LLC)

There is nothing flashy about Shore’s game — he’s a hard-nosed grappler that looks to get inside, get his opponents on the deck, and create finish opportunities. While he went the distance in each of his two appearances this year, the talented bantamweight from Abertillery had earned stoppages in 12 of his first 13 pro appearances prior to those contests.

He entered the bout with Sholinian with a jacked-up shoulder and broke his thumb early in the contest, but once he’s back to full health and firing on all cylinders, Shore should be on the very short list of fighters with the talent to challenge for a place in the bantamweight rankings in 2022.