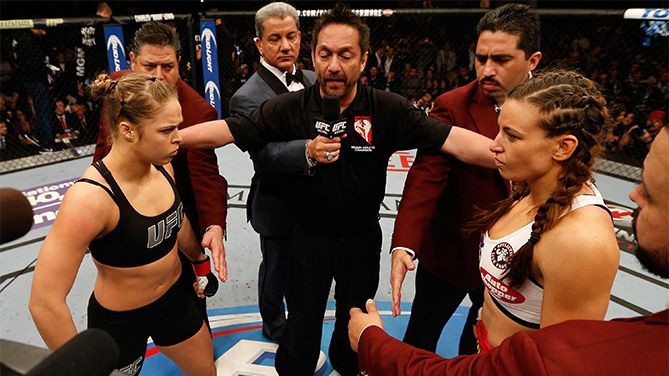 Miesha Tate knows better than anyone what it’s like to look across the Octagon and see Ronda Rousey or Cat Zingano. She’s done it – three times.

Unhappily for Tate, all three ended in defeats: two armbar submissions to Rousey and a third-round TKO loss to Zingano in a fight she appeared to be winning. 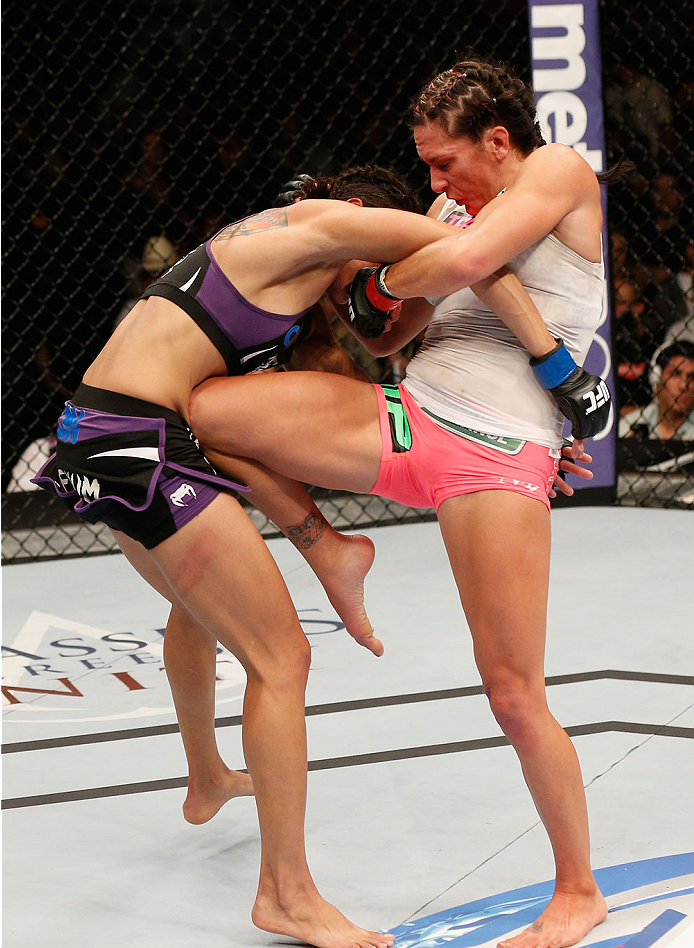 Ronda’s boxing and eye-hand coordination have come along very well, and she’s improving in her accuracy. But where
I think Zingano is going to be better is with her kicks and knees, anything with her lower body. She’s worked a lot of Muay Thai, so her striking is different. Even when they’re in a clinch, she’s going to be very dangerous. She mixes in elbows, she mixes in knees and she kicks from a distance.

Ronda has said she’s had problems with her knees, and Zingano has good power in her kicks, so I wonder if she’s going to target that area and use the kicks to keep Ronda away, maybe take away some of that forward pressure that Ronda is so well known for by chopping her legs down.

Ronda is going to do what she usually does. She’s going to throw hard punches and she’s going to look to grab hold of the head or an arm and get the throw or a trip and get it to the ground eventually. I don’t think Ronda is going to be scared to strike with her, but she knows where she’s probably going to win the fight -- on the ground.

Ronda is more efficient in her takedowns than Cat. Cat does have a wrestling background, so she’s going to be a little more difficult to take down than a lot of Ronda’s previous opponents. She’s going to have more awareness and more stability, more core strength and just overall balance than a lot of the girls Ronda has fought.

Ronda’s judo is bar none. I was able to body lock and throw Zingano around for the most part in our fight, so I think Ronda will be able to do the same thing. If she gets her in the right position, it’ll cost Cat.

Ronda’s defense is her offense. When Zingano tries to take her to the ground, she’s going to be looking to get those quick reversals, quick throws and turn her defense into her offense.
> Read: Hollywood Beckons, But Ronda Rousey Only Has a Title Shot in Her Sights

Zingano has the edge. Her ground and pound is nasty, and her top pressure is really, really good. I will give her that. If she gets on top of you, she has that wrestling, that writhing, grinding style. But she will also posture and throw. She’s good at doing the transitions from there, sticking when she needs to stick, floating when she needs to flow and also good at inflicting damage while she’s there. She’s not a lay-and-prey wrestler like other women in the division. She’s very active. When she gets on top of someone, she’s looking to finish the fight.

That’s how Ronda finishes 99 percent of her fights. That’s where she has the biggest advantage. But it’s not to say Zingano has nothing for going her there. Zingano has the ability to catch submissions. I just don’t think that’s where she should look to play. It’s playing with fire. 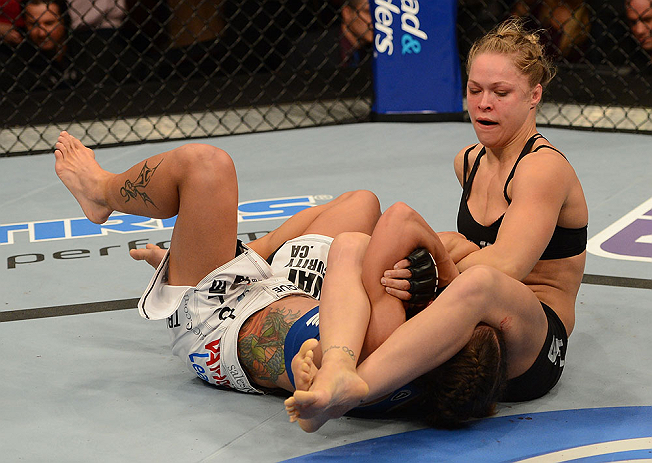 I don’t think Zingano is looking to be on the ground, but if she is on the ground, Ronda will be looking to submit her with an armbar. Zingano doesn’t want to stick around on the ground with Ronda. You can’t just be playing defense. That’s how Ronda catches girls.

If I was Cat, any time I was on the ground I’d be looking to mix in offense and defense. But I don’t think that’s where she wants to go. But if Ronda gives up her back on one of the throws, if Zingano gets her hooks in you, she can be very dangerous. She’s used to wrestling. She’s used to riding people. For sure she would be looking to finish the fight right there.

I really feel like it’s going to end quickly in the first round. The fact Zingano is a slow starter is not good for her in this fight with the style matchups. She really needs to be mentally prepared to match the pace of Rousey.

What Zingano does have going for her is that she rallies. As the fight goes on, she gains momentum. And it seems like Ronda starts to lose momentum. She comes out at such a fast, furious pace, she usually is able to finish people in the first round. But if she doesn’t get it, it seems like she definitely slows considerably, where Zingano is going to gain momentum.
> Read: Cat Zingano, A Fighter in Every Sense, Embracing Every Moment

I think it’ll either be a quick first round finish or go to a decision.