Make Sure You Know Which Fighters Are On The Rise Heading Into UFC Fight Night: Tsarukyan vs Gamrot
By E. Spencer Kyte, on Twitter @SpencerKyte • Jun. 21, 2022

We’re going to do things a little differently off the top of this week’s edition of Fighters on the Rise because the ability to adapt and make changes on the fly is critical both inside the Octagon and generally in life, as well.

There will still be time and space dedicated to a trio of emerging talents stepping in to compete this weekend below because we’re not looking to re-invent the wheel or anything, but before we get to those individuals, we have to at least briefly talk about three FOTR graduates slated to compete on Saturday that also deserve a tip of the cap in this space.

Arman Tsarukyan and Mateusz Gamrot have each been mentioned in this series on multiple occasions, and now they’re facing off against one another in the main event. They are two of the absolute best up-and-coming fighters in the 155-pound weight class, if not the UFC as a whole, and the victor could very well find himself on the fringes of the championship conversation by the time the year is out.

Shavkat Rakhmonov has made consecutive appearances in Fighters on the Rise after being the final cut ahead of his promotional debut at UFC 254. He got the same designation afforded to Tsarukyan and Gamrot above prior to his win over Carlston Harris in February, which landed him a place in the Top 15 and a date opposite Neil Magny this weekend.

The reason I want to be sure to shout these three out before getting into this weekend’s spotlighted trio is because they are the precise reason I put out this column every week: to introduce people to new names and unheralded talents that have the potential to become entertaining additions to their respective weight classes, Top 15 fighters, and in some cases, if everything breaks right, potentially champions.

All three of these fighters are on the cusp, and the three below stepping into the Octagon before them on Saturday each has the potential to follow in their footprints in the months and years to come.

This is the June 25 edition of Fighters on the Rise. 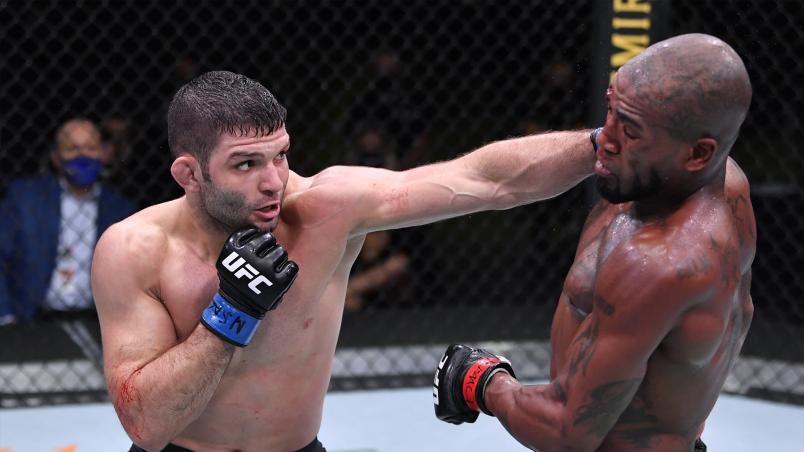 Spotlighting someone on a two-fight skid with a 4-4 record through eight UFC starts probably feels like a weird way to start given that I was just talking about potential contenders and Top 15 talents, but Moises has already had a number next to his name once before and is a prime example of someone who should not be judged simply by what his record is inside the Octagon.

The Brazilian’s four losses have come against, in chronological order: Beneil Dariush, Damir Ismagulov, Islam Makhachev, and Joel Alvarez; two Top 5 talents and two fighters on the edges of the rankings, with the loss to Alvarez coming when the Spaniard missed weight.

Preview Every Fight On UFC Fight Night: Tsarukyan vs Gamrot

In addition to having shared the Octagon with those elite competitors, Moises also holds victories over Michael Johnson, Bobby Green, and Alexander Hernandez; another trio of proven, experienced competitors who, when added with the quartet that have beaten him, present a clear picture of where he fits in the division.

What makes Moises someone I feel can still progress further up the divisional ladder is that he just turned 27 towards the end of March, which means he’s just now starting to come into his athletic prime. Before Jiri Prochazka won the light heavyweight title a couple weekends ago in Singapore, every UFC champion was north of 30 years old, and they’d all spent a number of years competing on the biggest stage before reaching the summit.

Saturday’s clash with Christos Giagos is a chance for Moises to get things moving in the right direction again and affirm his position in the lightweight hierarchy. Stylistically, it’s a quality matchup with an opponent who prefers to grapple, but can also throw some hands, and will force the American Top Team representative to be fully focused in order to avoid a three-fight slide.

Given the ebbs and flows we’ve seen from some of the top names in the 155-pound weight class, would it really be that surprising if Moises really hit his stride a couple years from now and became a permanent fixture in the Top 15? 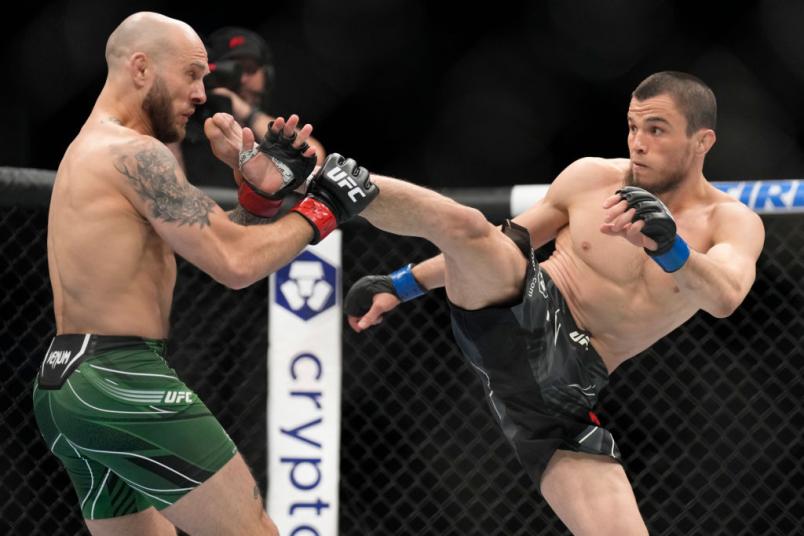 Umar Nurmagomedov of Russia kicks Brian Kelleher in their featherweight fight during the UFC 272 event on March 05, 2022 in Las Vegas, Nevada. (Photo by Chris Unger/Zuffa LLC)

Umar Nurmagomedov of Russia kicks Brian Kelleher in their featherweight fight during the UFC 272 event on March 05, 2022 in Las Vegas, Nevada. (Photo by Chris Unger/Zuffa LLC)

Nurmagomedov is another repeat mention in this space. In fact, he made Fighters on the Rise for UFC 254 over Rakhmonov, only to be scratched a few days before his bout with Sergey Morozov.

Since then, the 26-year-old cousin of former lightweight kingpin Khabib Nurmagomedov has made a pair of successful trips into the Octagon, choking out Morozov in the second round of the delayed joint debuts, and following it up earlier this year with a first-round submission finish over veteran Brian Kelleher. Now 14-0 as a professional with more than half of his wins coming inside the distance, Nurmagomedov gets another reasonable step-up in competition this weekend when he takes on Nate Maness.

Despite the familial connection, Nurmagomedov is a very different fighter than his now retired cousin, working from more of a bouncy, almost karate stance than the wrestling-first approach his lineage and heritage might lead you to assume he would favor. He throws a lot of kicks, mixing them up to all levels, flashing good speed and dexterity in the standup game, while still having slick grappling and smooth transitions whenever the fight does hit the canvas.

Maness should be an excellent test for him this weekend — an unheralded member of the emerging set with a 14-1 record that includes three wins in as many UFC starts and consecutive second-round finishes over Luke Sanders and Tony Gravely.

Regardless of what happens this weekend, Nurmagomedov is yet another name to keep tabs on in the ridiculously deep bantamweight division. 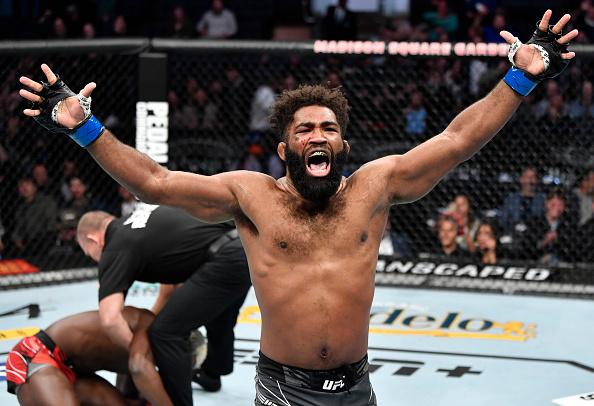 Chris Curtis reacts after his TKO victory over Phil Hawes in their middleweight fight during the UFC 268 event at Madison Square Garden on November 06, 2021 in New York City. (Photo by Jeff Bottari/Zuffa LLC)

The oldest member of this group at 34, Curtis might have the clearest, most immediate opportunity to break into the Top 15 of any of the three, entering Saturday’s bout with Rodolfo Vieira off a pair of impressive stoppage wins over Phil Hawes and Brendan Allen and riding a seven-fight winning streak overall.

“Action Man” had a strong showing on Dana White’s Contender Series (DWCS) in Season 2, scoring a third-round knockout win over Sean Lally. He didn’t get a contract and briefly retired, kicking off a two-year stretch with mixed results, a couple more sabbaticals, and some genuine uncertainty about what the future held for Curtis.

The veteran entered 2021 bent on fighting as much as possible and trying his best to reach the highest level, rattled off four wins in seven months across multiple divisions, and was quick to raise his hand to face Hawes when the DWCS alum needed a dance partner on short notice. That fight didn’t happen that particular weekend, but instead came together at Madison Square Garden, where Curtis won his UFC debut by first-round knockout.

A month later, he stopped Allen less than two minutes into the second round of their clash, giving him six wins on the year and one of the coolest comeback stories in recent memory.

Now he steps in with Vieira, an extremely dangerous grappler still getting acclimated to being a mixed martial arts competitor. After suffering a submission loss to Anthony Hernandez last February, Vieira got back into the win column in the summer with a third-round submission win over Dustin Stoltzfus, pushing his record to 8-1.

There are always greater opportunities to climb the ladder in the middleweight division, and a third consecutive stoppage win would certainly move Curtis closer to breaking into the rankings, if not earn him a place in the Top 15.

And given what he did in 2021, are we really going to say the resilient veteran can’t keep stringing together wins and eventually settle in comfortably to a spot in the Top 10?