Make Sure You Know Which Fighters Have Momentum Heading Into UFC Fight Night: Santos vs Ankalaev
By E. Spencer Kyte, on Twitter @SpencerKyte • Mar. 8, 2022

One of my favorite things through the first several cards of the year is how many impressive emerging talents we’ve seen grace the Octagon.

Maybe I’m biased because I write a series spotlighting emerging talents every week, but seriously — each and every week, somebody or a couple different somebodies has turned in the kind of performance that makes you say, “I’m gonna make a note of that for later,” and there is no sign of it stopping.

This weekend, three competitors that closed out their 2021 campaigns with efforts that made you sit up and take notice look to carry that form over into their first appearances of 2022, and join the crush of promising up-and-comers that have made an impact inside the Octagon already this year.

This is the March 12 edition of Fighters on the Rise. 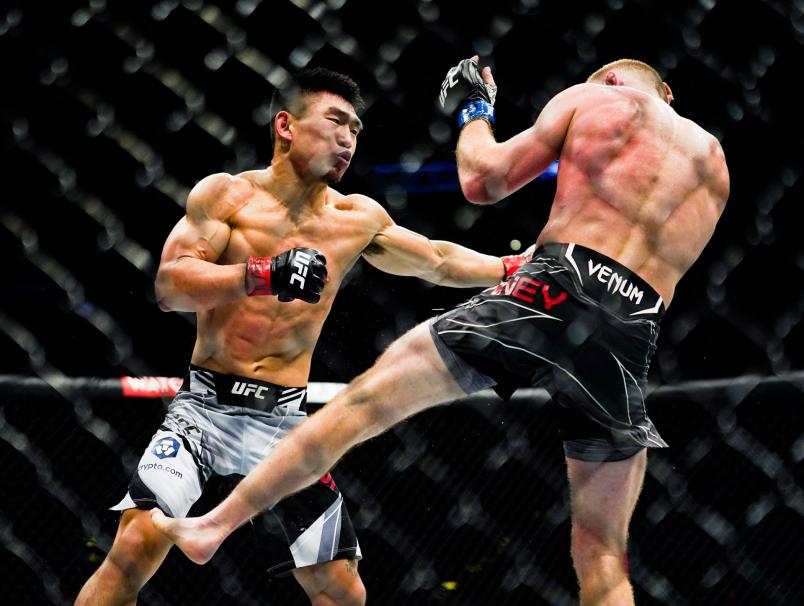 Song Yadong lands a punch on Casey Kenney in the 2nd round during their Bantamweight fight at Toyota Center on July 7, 2021 in Houston, Texas. (Photo by Alex Bierens de Haan/Getty Images)

You’ve heard of the famous icebreaker “Two Truths and a Lie” before, right? Well let’s play a round, but for the purposes of this exercise, I’m going to be Song Yadong. Here we go:

Which two are true and which one is the lie?

The first one is true, as Song checks in at No. 14 in the latest edition of the UFC Fighter Rankings, four spots behind Marlon Moraes, the man he faces this weekend.

The second one is true as well, as the Chinese standout earned victories in his first four appearances and went unbeaten in his first six UFC appearances before losing to Kyler Phillips last year at UFC 269 and then rebounding with victories over Casey Kenney (split decision) and Julio Arce (technical knockout) to close out the year.

That means No. 3 is the lie — Song is not 27 years old; he’s only 24, which makes the two truths all the more impressive and why he is absolutely someone folks should be paying close attention to this weekend.

It’s difficult to articulate just how impressive what Song has already accomplished inside the Octagon is, given his age. Even if you want to question the results of his draw with Cody Stamann and his win over Marlon Vera, the fact that he went the distance with those two divisional stalwarts and ran level with them the entire way speaks to the level of talent and upside he possesses.

Song’s athleticism has never been in question and he showed early in his career that he’s a powerful striker, but what he’s shown over the last two fights is that he’s developing as a fighter in terms of understanding the dynamics of a fight, how to pace himself, and how to best deploy his weapons.

Arce isn’t a guy that gets thoroughly outworked and finished, but Song was a step ahead and clearly quicker from the jump and never relented, getting the Queens native out of there early in the second round. The fact that he’s positioned behind some of the people he’s positioned behind in the rankings feels like a mistake, but one that could get remedied with a strong showing on Saturday.

Moraes has certainly struggled as of late, entering this weekend’s contest on a three-fight slide and having dropped four of his last five, but each of those contests came against elite competition. The Brazilian had positive moments in his last outing against Merab Dvalishvili, is the most experienced opponent Song has faced, and is still a threat to finish anyone, especially early.

If the Team Alpha Male representative can ace this test and up his winning streak to three, a move forward in the rankings and a date with another ascending bantamweight next time out wouldn’t be out of the question. 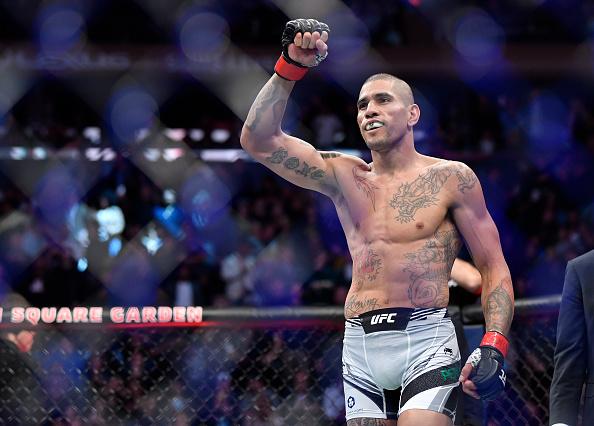 You have to appreciate that Alex Pereira isn’t taking the slow and steady approach to his transition into the UFC.

After securing a second-round stoppage win over Andreas Michailidis in his promotional debut at UFC 268 in November, the 34-year-old kickboxing superstar is diving into the deep end of the middleweight ranks for this sophomore appearance, squaring off with fellow Brazilian finisher Bruno Silva on Saturday night.

There was a lot of hype surrounding Pereira’s debut at Madison Square Garden and the former Glory Kickboxing two-division world champion did not disappoint, looking sharp through the opening five minutes before felling Michailidis with a flying knee just 18 seconds into the middle stanza.

While he’s just five fights into his mixed martial arts career and has only fought twice since the start of 2020, the first five minutes and change that Pereira logged inside the Octagon illustrated why so many were keen to see him make the transition to the MMA and jump right into the fray with the UFC. There are a small number of people that can be considered on the same level as Pereira when it comes to his kickboxing skills, and the more comfortable he gets inside the cage, the more he’ll be able to deploy all of his weapons, which is a scary thought for anyone else looking to scale the middleweight ranks at the moment.

Saturday’s clash with Silva should serve as a solid challenge for Pereira, who trains alongside light heavyweight champ Glover Teixera.

Silva has posted seven consecutive victories heading into this weekend, all by stoppage, with the last three coming during a blistering seven-month rookie campaign in the UFC. The 32-year-old has nasty power and a Brazilian jiu jitsu black belt in his back pocket just in case, so we should get to see Pereira’s defensive abilities tested and get a truer read on where he stands in the division at the moment.

Pereira earned a pair of victories over middleweight champ Israel Adesanya during their kickboxing days and the matchup remains at the top of list of fights many fans want to see for “Poatan.” If he can secure another win this weekend, that dream matchup will be one step closer to becoming a reality. 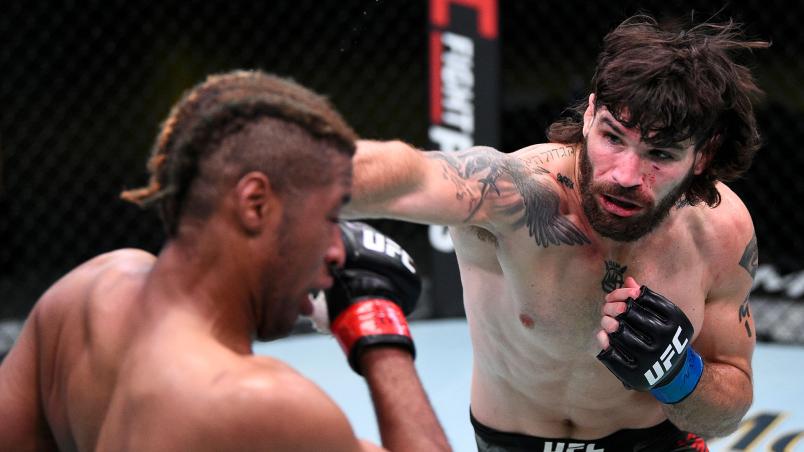 Matthew Semelsberger started his 2021 campaign with a 16-second knockout win over Jason Witt, and yet it wasn’t his fastest victory of the year.

Six months after dispatching “The Vanilla Gorilla” and three months after dropping a unanimous decision to Khaos Williams, Semelsberger made the walk at UFC 266, competing in front of an audience for the first time in his UFC career against Nick Diaz’s chief training partner, Martin Sano. Just like the fight with Witt, it was “one shot, one kill” for the former collegiate football standout at Marist College, as he clocked Sano with a clean right hand that ended the fight in a flash.

His tandem sudden finishes in 2021 and the fact that he’s already logged four appearances in the Octagon can obscure the fact that Semelsberger is still relatively early in his mixed martial arts career, having only made his pro debut in April 2017. He reached the UFC is a shade over four years, but is still learning how to combine his competitive spirit, clear athleticism, and obvious power into a complete fighting package.

As he put it ahead of his fight with Sano, “I have all the tools that I need and I’m sharpening them up every day, but I haven’t done the greatest job of bringing all the ingredients together.”

Saturday night, “Semi the Jedi” welcomes another explosive athlete to the Octagon, as he squares off with AJ Fletcher, a member of the Dana White’s Contender Series Class of ’21.

Unbeaten through his first nine professional fights, the Gladiators Academy product kicked off last season by knocking out Leonardo Damiani less than halfway through the first round of the year. He’s earned finishes in eight of his nine career wins and has been logging rounds with Lafayette’s favorite son, Dustin Poirier, in the build to his debut this weekend.

Semelsberger feels like one of those fighters that is going to make a real run at some point when he gets things dialed all the way in, as he’s competitive as all get-out and a dynamic athlete, and he might already be started down that road. How Saturday’s contest with Fletcher plays out will go a long way clarifying where he’s at in his development as a fighter and what the rest of 2022 may hold for him.

And if it’s anything like his two victories from last year, the Maryland native could find himself on the fast track towards the Top 15 in the welterweight division.