Fighters on The Rise | UFC Fight Night: Ortega vs Rodriguez

See Which Athletes Are On The Rise Heading Into A Stacked Night Of Fights In Long Island, NY.
By E. Spencer Kyte, on Twitter @SpencerKyte • Jul. 12, 2022

Eight months after opening its doors for the first time, UBS Arena in Elmont, New York will play host to the UFC, as the mixed martial arts leader touches down at Belmont Park for an exciting collection of fights with the main card airing on ABC.

Just a couple weeks after Alexander Volkanovski cemented his place atop the featherweight division, former title challenger Brian Ortega and perennial contender Yair Rodriguez face off in the main event. While that contest should bring further clarity to things in the 145-pound ranks, two sets of veteran female contenders face off in crucial main card matchups with their own divisional ramifications, as Michelle Waterson faces Amanda Lemos at strawweight, and Lauren Murphy welcomes Miesha Tate to the flyweight division for the first time.

In addition to the established set poised to make the walk this weekend, there are also a host of emerging talents looking to use this opportunity to further establish themselves in their respective divisions, including an all-action featherweight, another streaking bantamweight, and a strawweight newcomer.

Here’s a closer look at those competitors in this week’s edition of Fighters on the Rise. 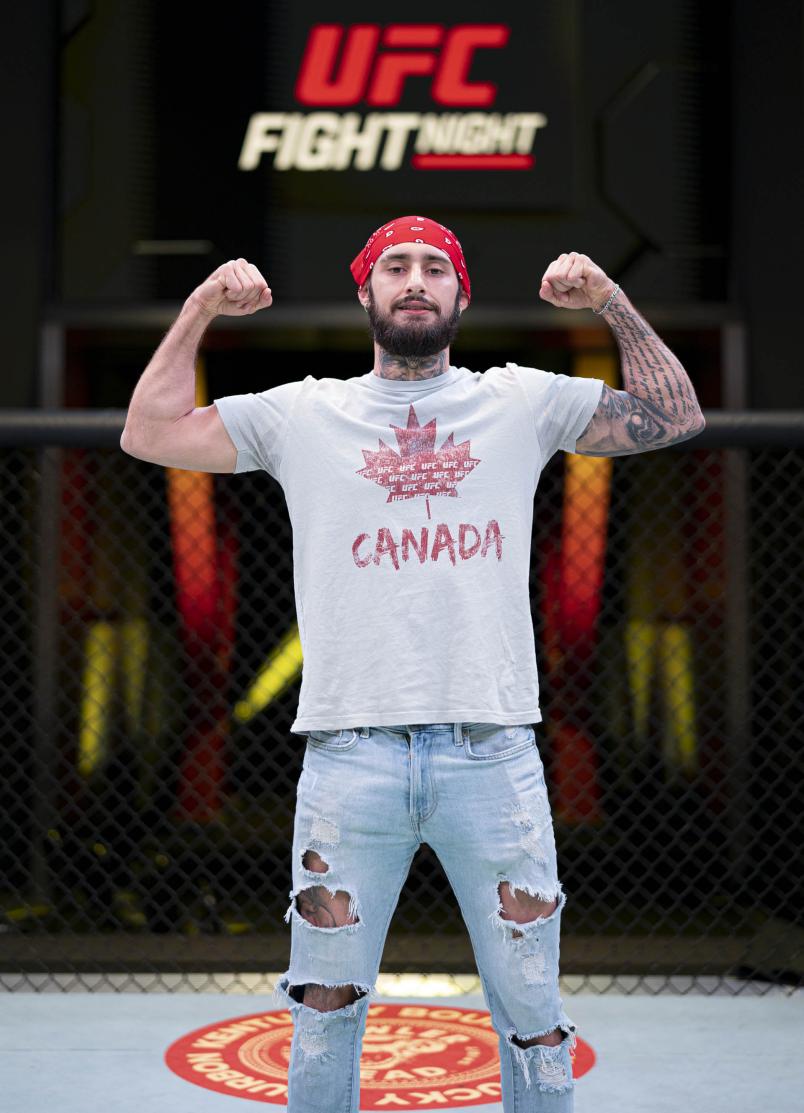 Through the first six fights of his UFC career, Jourdain went 2-3-1, flashes of brilliance mixed with untimely mistakes to produce an even record and a bunch of questions about where the former TKO two-division champion fit within the featherweight division.

Was he an emerging star with Top 15 upside? An all-action fighter that would hover around .500? Someone that thrived on the regional circuit, but wasn’t ready to compete on the biggest stage in the sport?

After closing out 2021 with a unanimous decision win over Andre Ewell, one punctuated by a Spartan kick and a scream at the horn from the French-Canadian, Jourdain showed that he’s most assuredly someone to keep close tabs on in the 145-pound weight class in April, dropping Lando Vannata with a straight left in the center of the Octagon before clamping onto a deep guillotine choke and making the groovy one tap.

Now the 26-year-old gets a chance to make a case for having a number next to his name as he steps into the Octagon with Bronx-born Shane Burgos in a highly anticipated main card pairing.

Burgos is allergic to being in a boring fight, operating behind long, fluid strikes with a penchant for coming forward and banging it out in the pocket. He’s 7-3 in the UFC and has thus far only lost to top-shelf competition while earning quality wins over established talents like Cub Swanson, Makwan Amirkhani, and Billy Quarantillo.

Stylistically, this profiles as an entertaining scrap between two aggressive, attacking strikers, and it gives Jourdain the opportunity to show that he’s not only all the way comfortable competing on the big stage, but ready to really start working his way up the run sheet and towards the top of the stacked featherweight division. 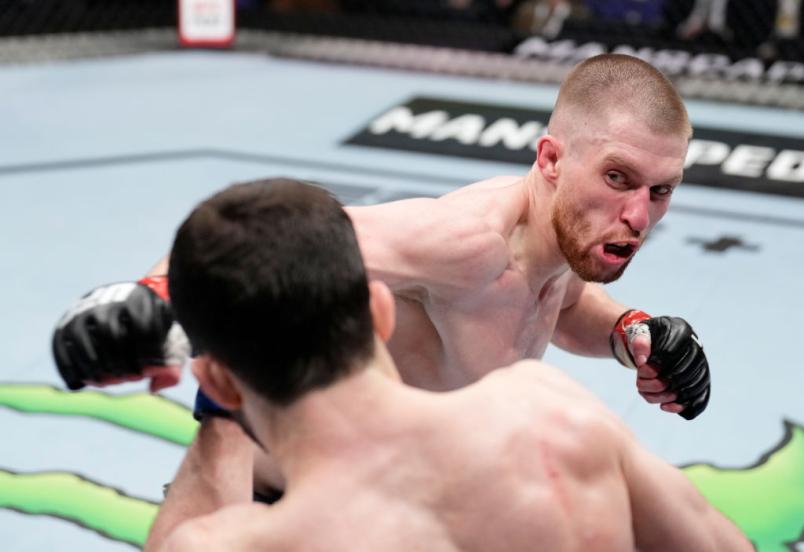 Every time Shore is included in this space, I think it will be the last time I include the Welsh standout in this space, and then he continues to be discussed far less often than several other emerging bantamweights and I’m forced to once again remind everyone about what the 27-year-old brings to the table.

Shore is 5-0 in the UFC, 16-0 as a professional, and has never left the cage without a victory in his entire fighting life, having gone 12-0 as an amateur before shifting to the professional ranks. He’s won 28 consecutive fights dating back to August 2012, and even if you want to discard his amateur exploits, Shore is still on a 16-fight winning streak that includes a win over UFC vet Vaughan Lee plus a championship victory and title defense under the Cage Warriors banner before matriculating to the Octagon, and a perfect mark through five starts in the big leagues.

If doing what Shore has done were easy, there would be far more folks walking around with unblemished records through 16 fights, but the fact that there isn’t should further underscore why folks should be paying close attention to the grappler from Abertillery.

His victory over Timur Valiev in London back in March finally carried Shore into the rankings, and now he gets his first assignment against someone with a number next to their name as he takes on fellow ascending talent Ricky Simon on Saturday.

The 29-year-old Simon has won four straight following consecutive losses to Urijah Faber and Rob Font, showing a little more aggression and urgency when it comes to hunting down finishes and looking to do damage in the cage. He too had an excellent career on the regional circuit, and should be able to push Shore in the grappling exchanges, which makes this a grand opportunity for “Tank” to showcase his talents.

He’s worked his way incrementally up the ladder through his first five UFC appearances, and now he finally gets the chance to show he deserves to be mentioned alongside the best the bantamweight division has to offer. The weight class has never been better, and if Shore can make yet another successful trip into the cage and halt Simon’s quality run of success this weekend, he should climb a little closer to cracking the Top 10 and could potentially find himself sharing the cage with an even more established name next time out.

While Jourdain and Shore are familiar faces that have been plying their trade inside the Octagon for the last couple years, Saturday marks Ducote’s debut, as the former Invicta FC strawweight champion and recently promoted Brazilian jiu jitsu black belt squares off with Jessica Penne in the opener.

The 28-year-old Oklahoma native began her career with a loss to future TUF contestant and UFC vet Emily Whitmire, and sat at just 6-5 through the first 11 bouts of her professional career, having been successful against lesser competition and struggling against the best fighters she faced while competing in the flyweight division.

Since disembarking for the 115-pound ranks, Ducote has found her groove, posting a 5-1 mark with wins over current TUF contestant Kathryn Paprocki, UFC alums Juliana Lima and Danielle Taylor, and Alesha Zappitella, winning and successfully defending the Invicta FC belt in those last two outings. Her lone loss in that stretch came by split decision in a clash with current UFC competitor Kanako Murata over the vacant strawweight title she would claim two fights later after Murata matriculated to the Octagon.

Though she is an excellent grappler, Ducote has been flashing impressive striking ability as of late, as well, securing a first-round knockout win over Janaisa Morandin in her Invicta FC debut, as well as earning stoppages against both Taylor and Zappitella in their championship engagements.

Saturday’s bout with Penne represents a step up in competition for the UFC newcomer and a date with a surging veteran, as Penne retuned from a four-year absence to post consecutive wins over Loopy Godinez and Karolina Kowalkiewicz in 2021, proving she still has plenty left in the tank.

This is a terrific opening assignment for Ducote, as it should instantly show where she fits in the ultra-competitive strawweight division. With sharp, quick striking and a deft grappling game should things hit the canvas, “Gordinha” profiles as someone who could become a real factor in the 115-pound weight class in a relatively short amount of time, and this fight with Penne on Saturday should make that clear.