Fighters on the Rise | UFC Fight Night: Luque vs Muhammad 2

Still buzzing after UFC 273? Me too, and how could we not be?

Last Saturday night was electric, with Alexander Volkanovski stamping himself as one of the best pound-for-pound fighters on the planet, Aljamain Sterling and Petr Yan battling it out for 25 tension-filled minutes, and Khamzat Chimaev and Gilbert Burns engaging in the best fight of 2022 thus far.

And that high from Jacksonville has me pumped up to keep pushing forward with excitement, as the action shifts back to the UFC APEX for a dynamic card headlined by welterweight contenders Vicente Luque and Belal Muhammad and featuring a host of intriguing, emerging talents across a number of divisions.

Here’s a closer look at three fighters with the potential to really stand out from the pack this weekend.

This is the April 16 edition of Fighters on the Rise.

You have to hand it to the 29-year-old Borralho.

Last season on Dana White’s Contender Series, the Brazilian secured a unanimous decision win over respected CFFC middleweight champ Aaron Jeffrey in Week 5 but didn’t secure a contract. Instead of being discouraged, he lobbied for a second chance to impress the UFC President, stuck around Las Vegas, and returned three weeks later, collecting a first-round stoppage win at light heavyweight and the opportunity to compete in the Octagon.

Now “The Natural” is ready to make his promotional debut against fellow DWCS Class of ’21 alum Gadzhi Omargadzhiev on Saturday, entering on a seven-fight winning streak and a 10-fight unbeaten streak.

The former Future MMA middleweight champion does a very good job of staying within himself inside the Octagon, sticking to what works instead of trying to force opportunities. While it kept him from getting a contract against Jeffrey, he still secured the victory and showed how explosive and dangerous he can be when presented with openings a few weeks later, dispatching Jesse Murray with swiftness.

It’s a tough thing to learn, but something that can serve fighters well, especially as they graduate to the next level, so it will be interesting to see if Borralho can continue playing to his strengths as he steps in with Omargadzhiev this weekend. The Russian middleweight earned a first-round submission win in his Week 9 appearance and carries a 13-0 record overall, making him one of Borralho’s toughest tests to date.

The Brazilian flashed some promise in his tandem wins inside the UFC APEX last fall, and now he’s back in familiar surroundings looking to keep the good times rolling in his promotional debut on Saturday. 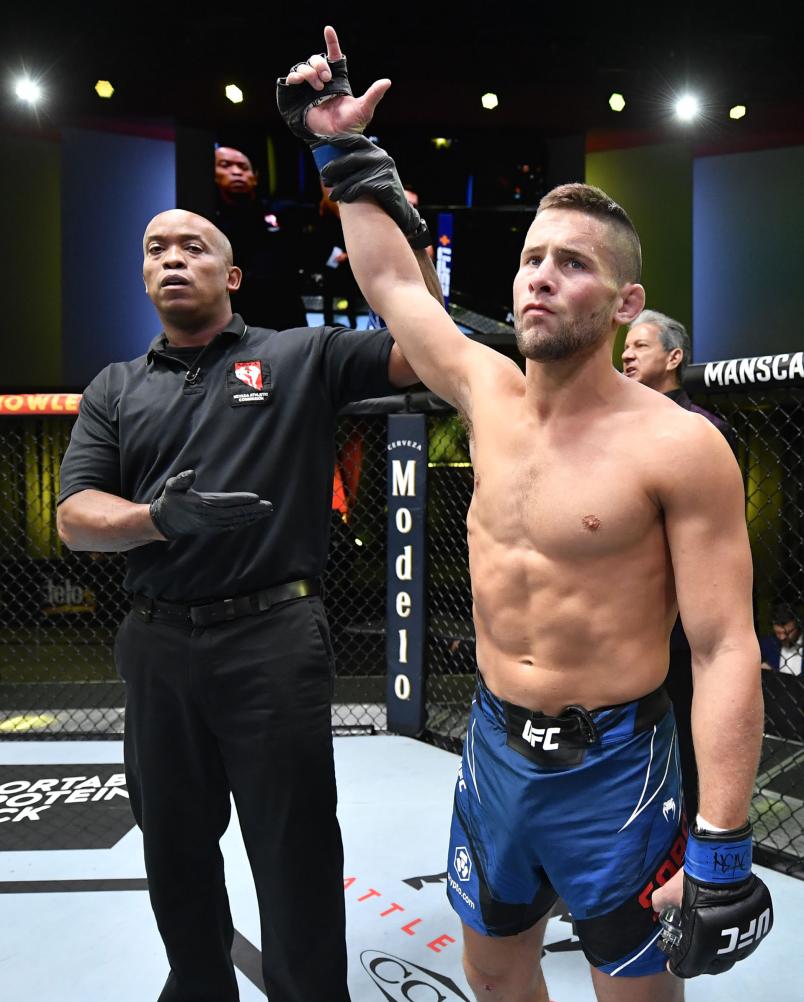 Pat Sabatini reacts after his victory over Jamall Emmers in a featherweight fight during the UFC Fight Night event at UFC APEX on August 28, 2021 in Las Vegas, Nevada. (Photo by Chris Unger/Zuffa LLC)

Sabatini went 3-0 during his 2021 rookie campaign, debuting with a win over Tristan Connelly at UFC 261, following it up by getting rocked, but still submitting Jamall Emmers in under two minutes, and closing out the year with a unanimous decision win over Tucker Lutz.

And now it’s time for the former CFFC champ to make his first start of 2022.

Originally scheduled to face Gavin Tucker, the 31-year-old Philadelphia native will instead face off with another Canadian, returning DWCS grad TJ Laramie, who dropped his promotional debut in the fall of 2020 and was sidelined for all of last year due to a couple different injuries.

Sabatini isn’t the kind of guy that is going to wow you with his athleticism or an array of dynamic striking techniques; he’s a technically proficient, blue-collar grinder with a terrific gas tank, strong grappling skills, and the kind of tenacity and toughness you expect from someone from “The City of Brotherly Love.” Like a lot of the competitors to make their way to the UFC from the CFFC cage, he’s faced good competition throughout his career, and it prepared him to make an instant impact upon arriving on the big stage.

He did that last year, and while the featherweight ranks are flush with talent, Sabatini clearly deserves to be recognized as one to watch going forward after his stellar rookie season. If he can maintain his winning ways and turn in another dominant performance against the returning Laramie this weekend, he could find himself standing across the cage from a ranked opponent in the second of the year. 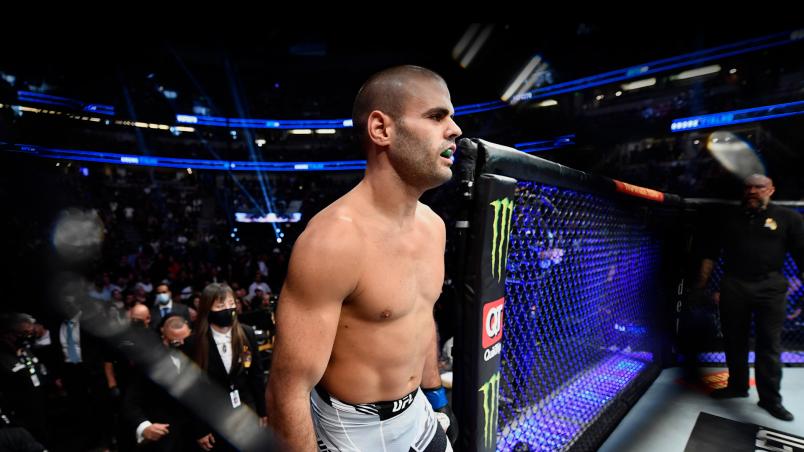 Andre Fialho of Portugal prepares to fight Michel Pereira of Brazil in their welterweight fight during the UFC 270 event at Honda Center on January 22, 2022 in Anaheim, California. (Photo by Chris Unger/Zuffa LLC)

Fialho got thrown into the deep end of the welterweight talent pool in his UFC debut earlier this year, jumping into the cage with streaking Brazilian Michel Pereira in a short notice pairing that was then pushed back a week. Despite the limited preparation time, quality opponent, and unexpected change in fight date, the Portuguese welterweight held his own, taking the fight to Pereira in the opening round before ultimately losing a decision.

With the first one out of the way and a full camp to prepare, Fialho returns this weekend against fellow South Florida-based welterweight Miguel Baeza in a matchup that promises to clarify where the Sanford MMA product stands within the 170-pound hierarchy.

Fialho had his moments against Pereira, especially early, where he worked behind a clean job and steady pressure to keep the Brazilian hemmed in along the fence and offering very little in terms of return fire. He was unable to adjust once Pereira started to open up a little, but that performance will surely serve as a teachable moment for the talented UFC sophomore, who went 4-0 with four finishes in 2021.

Baeza has hit the first rough patch of his career in advance of this one, entering on a two-fight slide after earning victories in each of his first 10 outings. He went the distance with former Top 10 fixture Santiago Ponzinibbio in June, and then was stopped early in the third by Khaos Williams in November, dropping his record to 3-2 inside the Octagon.

This is another tough assignment against an action-oriented, powerful opponent for Fialho, but also another chance to show he has what it takes to thrive in the treacherous depths of the UFC welterweight division.